KIM LAWTON, correspondent: The Tea Party movement has been on the march this election season with its message of reclaiming America through limited government, fiscal responsibility, and a free market. At rallies across the country, Tea Party activists reverently invoke the Founding Fathers and the Constitution. The focus is firmly on economics, with no mention of hot-button social issues like abortion or gay marriage. Yet the Tea Party has had great appeal for religious conservatives.

REV C.L. BRYANT (Adjunct Fellow, FreedomWorks): It is the people in our congregations who pay the taxes. That’s what makes it religious.

LAWTON: Rev. C.L. Bryant is a Baptist pastor from Louisiana and an adjunct fellow with FreedomWorks, one of the leading Tea Party grassroots groups. Before the Tea Party march in Washington, DC last month, Bryant led an optional nondenominational prayer service on the Mall. 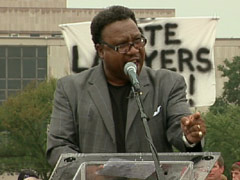 LAWTON: There have been longstanding tensions in American politics between fiscal conservatives and social conservatives. Tea Party leaders emphasize that theirs is a secular grassroots conservative movement. But significant involvement from religious right activists has raised new questions about whether those tensions have been overcome and what agenda will take priority after the election.

PROFESSOR MARK ROZELL (George Mason University): There are a lot of Tea Party activists who I would characterize as much more libertarian in bent than socially conservative. They’re really concerned about big government and reducing government size and scope in our society more than they’re interested in the social issues agenda. But there are other Tea Party activists who combine both fiscal and social conservatism.

REV. RICHARD CIZIK (New Evangelical Partnership): The Tea Party leadership that’s libertarian and the conservative Republican evangelicals who don’t like Obama—they have an agreement here. But what I would say to the evangelicals who have joined this movement: be careful, you will be used.

LAWTON: According to a new survey from the Public Religion Research Institute, 11 percent of Americans consider themselves part of the Tea Party movement, and 47 percent of them are Christian conservatives. 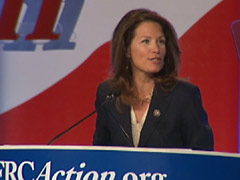 REP. MICHELE BACHMANN (R-Minnesota, speaking at Values Voter Summit): As for me, I prefer tea parties, just so you know.

LAWTON: The Tea Party had a highly visible role at the Values Voter Summit in Washington last month, an annual gathering of religious conservatives that always gives strong emphasis to social issues like abortion and gay marriage. One of the most popular speakers was South Carolina Senator Jim DeMint, a favorite at many Tea Party rallies.

SEN. JIM DEMINT (R-South Carolina): The fact is you cannot be a real fiscal conservative if you do not understand the value of having a culture that’s based on values.

LAWTON: During one panel discussion, several local Tea Party activists said it was their Christian faith that compelled them to get involved with the movement.

KATY ABRAM (Tea Party Activist): For about two weeks, I woke up about 3:00 in the morning every morning, and I’m really convinced that it was God speaking to me every single night.

LAWTON: Family Research Council President Tony Perkins, a sponsor of the Values Voter Summit, says there is a natural overlap between his movement and the Tea Party. 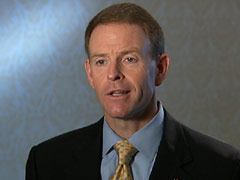 TONY PERKINS (President, Family Research Council): I’m not trying to turn the Tea Party into, you know, what we do, and they are not trying to turn us into what they do. We complement one another, and we work together because we have a common vision of responsible government, individual responsibility, and a stable society.

LAWTON: Perkins says social conservatives who are part of the Tea Party haven’t abandoned their core issues. It’s just that in this election, concerns about the economy have taken center stage.

PERKINS: When you look at government spending, rising debt, government expansion, takeovers, I mean, people they’re frightened, they’re scared, they’re frustrated, they’re angry. But there’s also the underlying values issues, the moral issues. For values voters it may be on the screen about the economy, but running in the back is where do these candidates, where do these parties stand on life, on marriage, on family?

LAWTON: Still, some evangelical leaders are uncomfortable with the current emphasis on economics.

REV. RUSSELL MOORE (Dean, Southern Baptist Theological Seminary): I think there are some issues that are transcendent and are more important than other issues. The right to life for the unborn is infinitely more important than the question of how high one’s taxes should be. 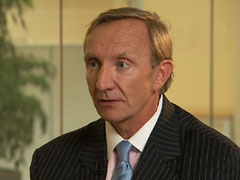 CIZIK: I’m opposed to deficits, too, but that’s not what primarily drives me as an evangelical Christian. Limited government? Not really. What I want is a society and a government and its policies to reflect the values I find in Scripture—religious freedom, caring for the poor, caring about justice for all, caring about the least of these. But that’s not what you hear from Tea Party leadership.

LAWTON: Rev. Richard Cizik says he believes religious conservatives are in danger of being exploited by Tea Party leaders who have no intention of ever supporting their social causes.

CIZIK: They’ll take those evangelical votes, and then they will walk away from those people as quickly as a bat of an eye.

ROZELL: Very often in the past religious conservatives have felt burned that they have supported these Republican candidates who focused on the fiscal agenda hoping that those same candidates once elected would support the social issues agenda, and then when those individuals did not the religious conservatives became very discontented, and this has happened time and time again. 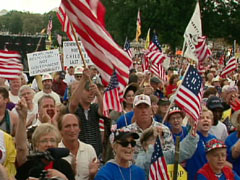 LAWTON: There appear to be disagreements within the Tea Party over exactly how to approach social issues and religion. Former congressman Dick Armey, who is chairman of FreedomWorks, has repeatedly said that conservatives are not successful when they focus on what he calls “the wedge issues.” And while several national Tea Party leaders want to avoid God-talk, many in the rank and file don’t shy away from it.

BILLIE TUCKER (Tea Party Activist): And some people say don’t you put God into the Tea Party, Billie, because the minute you do you are going to run a bunch of people off. And I’m saying I’m putting God back into the United States of America again.

LAWTON: Some, like Indiana Republican congressman Mike Pence, tailor their message to their particular audience. At the Values Voter Summit, his speech was laced with references to religion and social issues, but at the Tea Party rally the same week he avoided even a direct reference to the Bible.

REP. MIKE PENCE (R-Indiana, speaking at Tea Party rally): Engraved on the Liberty Bell in Philadelphia are words from an ancient text. Those words read, “Proclaim liberty throughout all the land and unto all the inhabitants thereof.” 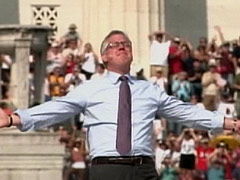 LAWTON: Another complicating factor is conservative talk show host and Tea Party icon Glenn Beck, who is rallying for a national revival of faith, honor, and values. He, too, has support from conservative evangelicals who like his open discussion of religion and morality. But Beck is a Mormon, which has also generated controversy among evangelicals.

LAWTON: Despite the internal debates, Rozell says in these midterm elections the political bottom line is clear.

ROZELL: Most of these people, even if they disagree with each other as to whether the focus should be social or economic policy, they’re conservatives, and they’re going to vote against the Democratic Party, and that’s ultimately what’s going to count.

LAWTON: The bigger question, he says, is what happens if Tea Party-backed candidates do indeed win.

ROZELL: We learned from the 1994 so-called Republican revolution that it’s easier to be against something than it is to govern.

LAWTON: And agreeing on a post-election political agenda could be the biggest challenge of all.

Heroin and the Faith Community