PASTOR DAVID PLATT: I’m in over my head at every level. Don’t tell that to this church, but I’m clueless. Yeah, if you could keep that a secret, but I am clueless.

LUCKY SEVERSON, correspondent: “Clueless” is not the word members would use to describe Pastor David Platt here at the Church at Brook Hills in Birmingham, Alabama. He has a doctorate and two master’s degrees from the New Orleans Baptist Theological Seminary. At 26, he became the youngest pastor in the country to lead a megachurch—a rich megachurch. And then something radical happened.

PLATT: I guess I would call it a crisis of belief, where looking at the Bible and I’m preaching and I’m thinking do I really believe this?

SEVERSON: He started questioning how his Christian beliefs are intertwined with the American dream of prosperity and success. 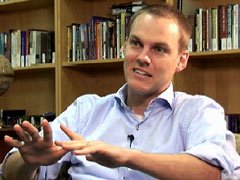 PLATT: I don’t in any way want to come across as anti-America. At the same time there are some ideals and values that are at the core of the American dream that are really contrary, even antithetical to the gospel that Jesus preached, and then the American dream obviously leads us sometimes in pursuits of money and possessions and pleasures in this world.

SEVERSON: What troubled him was the material comfort of his congregation and the multimillion-dollar megachurch they worship in. This was not the picture he had of the humble ministry of Christ.

PLATT: This idea that if you believe God, have enough faith, that he will give you health or wealth or prosperity, I don’t think, first of all, that it is a gospel at all. It’s not the good news that Jesus preached. More than health and wealth, Jesus I think gives us a picture more of a homeless and wounded gospel, and even the New Testament church is not a picture of prosperity theology. It’s a picture of adversity theology, persecution, struggles, poverty, helping one another out.

SEVERSON: Recent surveys have shown that while a significant number of mainline churches in the US have been losing members, many of those that preach the so-called prosperity gospel and the big churches, the megachurches, have been gaining members, churches like Faith Chapel, another even bigger megachurch in Birmingham led by Pastor Michael Moore. Pastor Moore’s church has grown from a few members to over 8,000. He’s dressed casually because this particular Sunday was set aside as a casual worship day. Members say Pastor Moore’s scholarship of the Bible is one reason the church has grown so large. Here’s his view of the prosperity gospel: 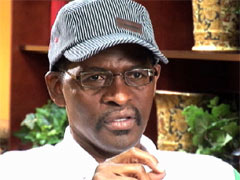 SEVERSON: The church’s new domes will soon house a bowling alley, a basketball court, and a play area for children, which Pastor Moore intends to eventually open up for his congregation and for poor kids in the neighborhood.

SEVERSON: Many of Pastor Platt’s members do have it to give, but some were jolted out of their comfort zone when he told them they should follow the lead of the early Christian church and give their lives and their wealth over to God and those in need. He called it a radical experiment and published a book that has become quite popular called “Radical.” It’s about taking back your faith from the American dream. 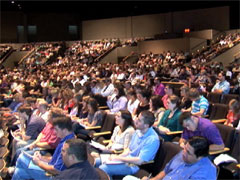 SEVERSON: The pastor calculates that Christian churches in the US spend $10 billion a year on buildings and own property valued at $230 billion. He says too many churches are acting like big corporations, but Brook Hills is now constantly looking for ways trim its budget.

SEVERSON: One of the sacrifices Pastor Platt challenges members to make is to go serve in places where there is vast physical and spiritual need—places like India and Africa. Over 250 members have moved to Third World countries to serve for three months, a year, or more to evangelize and to lend a hand. It was places like these that deeply influenced Platt’s theology.

PLATT: I remember one moment even locking eyes with this five-, six-year-old girl who was standing in her front yard, but it was basically a pile of trash and with a little blue tarp for a home, and I remember thinking my life is created for something much more than just a nice, comfortable Christian spin on the American dream.

SEVERSON: Some members choose places closer to home, like Chuck and Margaret Clark and their three children. They sold their large home in a well-heeled Birmingham suburb and moved to the inner city, though not without trepidation. 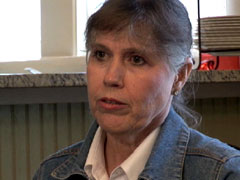 MARGARET CLARK: I had probably two primary concerns, and one was giving up my earthly comforts, and then secondly was just the fear for my children. We were aware of the drugs and the alcohol and the sexual promiscuity downtown, and it was just causing me a great deal of fear.

CLARK: Well, you can look around and see there’s lots of apartments that have been burned out, and there was a girl that got off a school bus here that was shot and killed recently.

SEVERSON: The Clarks have only been in their new downsized home a couple months, but they’re slowly getting to know the neighbors, evangelizing when its appropriate, and helping out where they can. Margaret is no longer afraid.

CLARK: We want to redefine success for our children. If my children are kind, and if they are compassionate, and that they are willing to take risks for others the way Christ took a risk for us, then I will accept that definition as success for them.

SEVERSON: Sacrifices by Brook Hill members have come in big ways and small, but in ways that are transformational.

AMANDA MCCOLLUM: I’m actually a preacher’s kid, so I’ve been in church since before I was born, and it really just changed the way I view the church and the church’s role in the world. 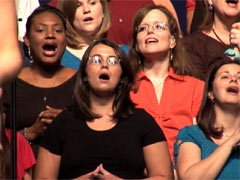 SEVERSON: Amanda McCollum is a financial planner who went on her first mission trip this summer to Guatemala. She now pays her tithes on her gross salary rather than her net earnings.

MCCOLLUM: That was one of the big steps. I quit my gym membership, and I cut back on my cable. I kind of pause my cable six months out of the year and then turn it back on for football season.

PLATT: Sitting here in the office one day with a very wealthy man in our faith family. He comes in and he says, “Pastor, I think you are crazy for saying some of the things you are saying.” And I said, “Okay,” and he said, “But the reality is you’re only saying what Jesus said,” and so he begins to share about how he is selling his home and cars, and with tears in his eyes this man looks at me and says, “I want my life to count.”

SEVERSON: When he first started preaching his radical theology, it was simply too much for some members. They left the church.

PLATT: It’s been a struggle. I mean, there’s been a constant tension, I think, in our faith family. When Jesus said some of the things he said and the crowds sometimes left, I mean totally left. The reality is when Jesus got to the end of his time on earth there were only 120 people who had actually stuck around and done what he told them to do in Acts chapter 1. I mean, that’s not a megachurch, that’s a mini-church.

SEVERSON: He lost members in the beginning, but now Platt says the church has more disciples than when he started, which is about 4300. No way to tell what’s next. According to the pastor, the sacrifices have only begun.