JOSH PERELMAN (Deputy Director of Exhibitions, Programs, and Collections): The primary theme of this institution is freedom and the opportunities, the challenges, the choices that come with that. Here we really have the opportunity at the place where freedom was enshrined in this country. This museum sits across the street from the Liberty Bell, up the street from Independence Hall and the Constitution Center.

It’s largely a chronological core exhibition that begins in 1654 with the first permanent settlement of Jews in what was then colonial America and weaves its story up until really the present day. 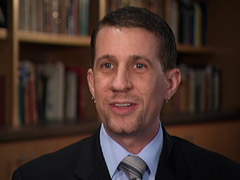 When Washington was elected president, Jewish communities around the nation sent him letters of congratulations, and they did so along with other religious communities around the country. Washington replied to a number of those letters, but the most famous reply was to the Touro Synagogue in Newport, Rhode Island, stating that the government of the United States would give “to bigotry no sanction, to persecution no assistance,” thereby enshrining in that letter, really, the principle that this would be a country to which all religions, all peoples would have the opportunity to live in freedom.

Freedom, while a revolutionary ideal, has been imperfect in its application. This has been a nation where there has been anti-Semitism, and Jews have had to wrestle, overcome, and challenge it.

The exhibition includes the story of Leo Frank, the only Jew known to have been lynched in America. Leo Frank was wrongly accused of raping and murdering a young girl in Atlanta. His story is emblematic of the struggles Jews have faced on their pathway to integration. 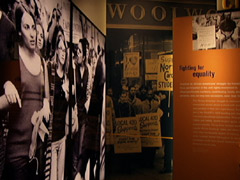 At the same time freedom makes possible the potential for integration at a level that Jews had experienced at very few times in their history, it also makes possible the ultimate choice, which is to not be Jewish, and in some ways this is one of the inner dramas of the American Jewish experience. It’s negotiating between heritage and homeland.

The ingenuity of Jews in America has led to all sorts of amazing achievements in the sciences, in culture certainly. Irving Berlin’s story is really remarkable in that here he is, this Jewish immigrant from Russia who wrote “God Bless America,” who wrote “White Christmas.”

One item that visitors will love to see is the typewriter from “Schindler’s List,” which Mr. [Steven] Spielberg made available to the museum for exhibition.

And certainly one of the most colorful groups are Jewish gangsters, Jewish criminals.

I think one of the important roles Jews have played in the history of this nation is that Jews have been advocates for civil rights, civil liberties, for the extension of freedom not only to themselves, but to others as well. Whether it’s Abraham Joshua Heschel in the civil rights movement or Bella Abzug in the women’s movement, or the many people who came together for the movement for Soviet Jewry, here they are staking their claim to freedom and working tirelessly, energetically on behalf of the freedoms of others.