BOB ABERNETHY, host: We have a profile today of a man who is spending his life trying to help bring about a more ethical America. He is Rushworth Kidder, a former Christian Science Monitor correspondent and columnist who founded and runs the Institute for Global Ethics. As he makes clear in his new book Good Kids, Tough Choices, Kidder wants to help parents help their children make ethical decisions and develop the moral courage to carry them out.

A familiar sight in Rockland, Maine is Rushworth Kidder leaving town. From his think tank, the Institute for Global Ethics, Kidder is on the road about half the time helping corporations, schools and other groups think about what’s ethical. This day-long session was at New York University’s Schack Institute of Real Estate.

RUSHWORTH KIDDER (speaking to group): So the whole thing is just to think about the characteristics of a morally courageous individual. 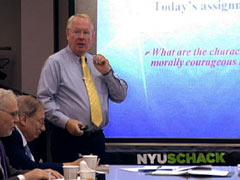 ABERNETHY: Kidder says at sessions like this one over 20 years he has talked ethics with 40,000 people. The first step is easy, he says: telling right from wrong. You ask, is this illegal? Against the rules? If not, another question:

KIDDER: We just call it the stench test. Does the thing just plain stink? At some gut level, instinctive way, is this just wrong? Suppose it passes that one. Go on to what we call the front page test: How are you going to feel if everything you did shows up on the front page of tomorrow morning’s paper, or these days on YouTube, on Facebook? And finally, the one I love to get to is what we call the Mom test. The Mom test is what would my Mom do in this situation?

ABERNETHY: Kidder says the most important thing parents can do for their kids is set a good example. He also says there are helpful ways to think about ethical choices, and he demonstrated some of them with a group of parents he invited, at our request, to talk about issues they face.

KIDDER: What do you do as a parent if it’s clear to you that one of your children has told a lie to you?

MOTHER: The three-year-old still tells the truth. The nine-year-old—lying is pretty prevalent. I’d say daily to weekly. It’s been quite an issue. 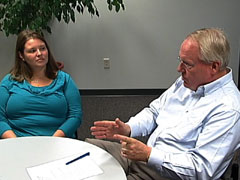 ABERNETHY: Kidder says younger children lie, but don’t cover it up. Older kids do both.

KIDDER (speaking to parents): There’s a piece of research that describes the fact that, if we’re not careful, by the age of eight kids become—and this is the phrase the researchers used—“fully skilled lie-tellers.” That’s a frightening phrase.

KIDDER (speaking to parents): Everywhere we go and do this work, and I’m talking about around the world, we’ve worked in about 30 countries on this kind of idea, we keep hearing people talk about the same thing: honesty, responsibility, respect, fairness, and compassion. There’s no difference between the values held by people who say I am deeply religious and those who say I have no religion whatsoever. This really goes deep.

ABERNETHY: The hardest ethical choices, Kidder says, are not between right and wrong but between right and right, when two or more core values conflict. He told the story of a girl whose friend told her she was anorexic, but swore her to secrecy. Then the girl discovered that her friend’s condition was life-threatening.

KIDDER: Wow, you’ve just dumped that teenager or that middle-schooler right in the middle of a right-versus-right dilemma, where everything about truth-telling is hugely important. You don’t tell the truth, somebody may be dead. On the other hand, you don’t break a promise.

ABERNETHY: Kidder urges parents of young children to drill right and wrong into them. With older children he encourages discussion—recognizing potential conflicts before they occur.

KIDDER: Just having the opportunity in some ways to talk about these things ahead of time with kids, just to begin to get at some of the right-versus-right kinds of questions that come up, you’re at least giving a child a way to understand that oh yeah, these things happen. 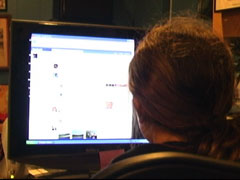 ABERNETHY: Of all the ethical issues the group raised, the most troubling was how to handle computers and new social media like Facebook.

FATHER: We’ve had five or six kids sitting in our living room, all on their computers, not interacting with each other.

MOTHER: On weekends in the afternoon we don’t allow any media—and that’s TV, computer, anything—because we need to disconnect.

MOTHER: I am petrified the day that she gets on Facebook. She’s not using email yet, but it’s certainly going to be an issue, and it’s scary.

KIDDER (speaking to parents): This is third grade you’re talking about?

MOTHER: She’s in fourth grade. I have full intention of reading emails before she even has an account. If you’re going to have this account it’s going to be monitored.

FATHER: The power is there to change the world. On the other hand, can it be used for things that are not great? Absolutely, and we’ve seen examples of that: kids, you know, having their sexual preference put up online and committing suicide and things like that. 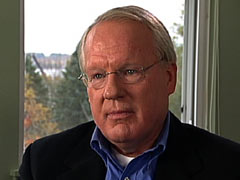 KIDDER: There is now so much power and so much immediacy in the technology that a single unethical decision put into the system can have consequences that it never could have had 30, 40, 50 years ago.

ABERNETHY: Kidder argues that identifying and choosing what’s right always carries the need to act. He calls that “moral courage,” and one of the group gave an example. Her daughter saw some kids picking on another child on the school bus.

MOTHER: So she is a very quiet girl, but she actually kind of stood up and said, “Hey, stop doing that. That’s bullying,” and I said, “What happened?” She goes, “Well, they didn’t hear me so I had to do it again.” It made me very proud of her. It was something that hopefully was based on our values that she’s ingrained in her.

ABERNETHY: At dinner that night, two of the parents tried out on their two daughters the idea from the discussion of banning all electronic media on weekend afternoons. It did not sell. 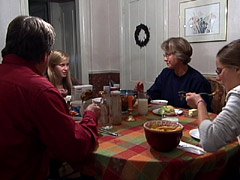 MOTHER: They want their kids to be connected with the family again.

DAUGHTER: I feel really bad for those kids.

DAUGHTER: I don’t understand. I mean, what would you do?

MOTHER: What about you, Jen? What do you think about that?

DAUGHTER: No. It’s not a good idea.

ABERNETHY: Whatever the resistance, Kidder looks at the power of new technology and sees an urgent need to anticipate its effects and prevent the worst of them. Indeed, he wants to make his Institute’s top priority now trying to create all over the US what he calls “a culture of integrity.”

KIDDER: I think our ethics is climbing. I think maybe the curve is sort of going up like that. I think our technology is going up like this. Unless we can ensure that there is a moral compass behind our uses of the new technologies, we run the risk of putting ourselves in grave danger. Will people look back at us today and say, “You discovered the digital age, and you frittered away the whole thing on Twitter, on Facebook, on Google, on those sorts of things. What on earth were you thinking?”