SAUL GONZALEZ, correspondent: If you want to get up close and personal with the global economy, there are few better places to go than the Port of New York and New Jersey. Here, merchant ships arrive from around the world, delivering mountains of cargo containers full of everything from plasma screen televisions to blue jeans, all imports bound for store shelves across America.

Chaplain (speaking at religious service in ship’s galley): The Lord be with you.

Mariners: And also with you.

GONZALEZ: However, this port and the ships that dock here are also where a group of chaplains operate an unusual maritime ministry: offering spiritual comfort and a helping hand to the world’s seafarers. 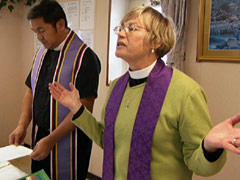 Chaplains (speaking at religious service): In peace we pray to you Lord God. Oh Lord, we pray for all mariners, that you will guard and protect us in dangers at sea and temptations ashore.

GONZALEZ: The chaplains belong to the Seamen’s Church Institute or SCI, an Episcopal group that’s become the largest service agency for mariners in the United States.

REV. DAVID RIDER (Seamen’s Church Institute executive director, speaking to other chaplains): Okay, my friends, what’s up today? What’s in port and where do we need to go?

RIDER: We serve the spiritual and humanitarian needs of seafarers through worship, through practical support like connecting the family back home, occasional human rights violations, occasional illness or death—those types of crises ministries we’re involved with to ease the burden on seafarers.

GONZALEZ: SCI has been part of life on New York’s waterfront since its founding in 1834, when it soon established a floating dockside chapel. It was a time when sailors’ lives at sea could be brutal and their earnings while ashore quickly blown on booze and brothels.

RIDER: The average lifespan of a seafarer from the day he started was 12 years. The natural calamities at sea and disease in the nineteenth century and dangers ashore did not bode well for a typical seafarer. 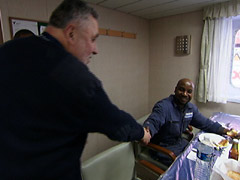 GONZALEZ: SCI now operates programs at both coastal and inland ports in the United States. Most of the chaplains’ work involves visiting ships and their crews—2,000 vessels annually in the New York area alone.

GONZALEZ: Once aboard, the chaplains both conduct religious services requested by the crew and, without proselytizing, give the men an opportunity to share their thoughts and troubles after a long voyage.

REV. MEGAN SANDERS (speaking to mariner): What’s your family like? Do you have mother, father?

GONZALEZ: SCI chaplain Megan Sanders says her conversations with mariners often involve how they keep their faith at sea. 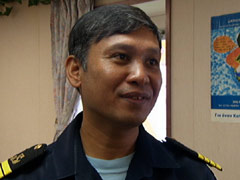 GONZALEZ: Much has changed in the maritime industry since the days of wooden ships and cloth sails, but for seafarers an ancient problem still persists. It’s the isolation, sometimes loneliness, of life spent out on the open ocean. Freighter captain Diomedes Cabatic is familiar with those feelings. He’s been at sea for over 20 years but says he hasn’t gotten used to long separations from his wife and children back in the Philippines.

GONZALEZ: Nine months you are away from home?

GONZALEZ: It’s a lot of time.

GONZALEZ: But I imagine sometimes when you think about your wife and your three kids it’s difficult.

CABATIC: Yes, it’s difficult to be away with them.

Chaplain: Three monts. So it might still be okay. We’ll have to check it. 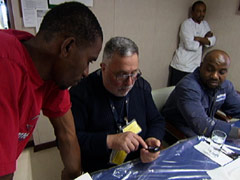 GONZALEZ: After weeks of being out of easy communication with loved ones while at sea, mariners in port, like the men of the freighter Zim Rio Grande, are eager to contact family and friends back home.

Chaplains: I think he’s looking for a T-Mobile SIM card. A SIM card? Okay, I have one right here.

GONZALEZ: The chaplains get many requests to help crew members make cell phone calls and get prepaid calling cards.

REV. MAJORIE LINDSTROM: So phone cards and top-off cards are very important. It gives them the ability to call when they are close to the coast, all times of the day. They don’t have to depend on going to a seafarers’ center or something else to make a call.

GONZALEZ: Vladimir Kurshenko, a young sea cadet from Ukraine on his second voyage, is still getting used to being away from home for so long.

VLADIMIR KURSHENKO: I am ready for this work. I’m ready to work like this, to have no contact with my family for a long time. What can I do?

GONZALEZ: In the past, seafarers could have looked forward to several days of shore leave to unwind after a long voyage, but both increased post-9/11 security at American ports and the “time is money” pressures of international trade make it difficult for mariners to venture far from their ships. 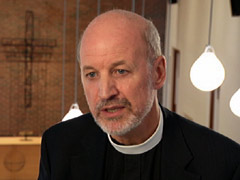 RIDER: Now the turn-around time is much faster because of automation and cranes, and especially on the container ships they can be in and out of here in 18 hours, where in the old days it might have been four or five days. In 18 hours, you are still working because there is work to do during the time at berth.

GONZALEZ: If sailors do have a few hours of free time, SCI runs a seafarers welcome center in the heart of the port. Sailors can come to relax, use phones, and check in with families on the Internet.

Chaplain blessing mariner: Henry, I bless you in the name of our Lord Jesus Christ.

GONZALEZ: Port chaplains like Marjorie Lindstrom say the public doesn’t appreciate the role sailors play in the global economy and the hard and dangerous work involved in getting goods across the sea.

LINDSTROM: You know, they think about goods, they think about the money, and the seafarers, the soul of those operations, are frequently ignored or forgotten or not even acknowledged, and they are the invisible. They go from port to port to port, and everywhere they go they are aliens. They are foreigners in a strange land.

GONZALEZ: Reverend Rider says his “on the waterfront” ministry reflects the spiritual dimension of seafaring and the comfort sailors have placed over the centuries in their faith.

RIDER: Cross the North Atlantic in January, feel your ship rolling as you are even in bed, and much like a soldier in a military situation, thinking about divine support and sustenance can become very basic. It is not an abstraction for a seafarer on a bad day. Being out at sea can be beautiful or haunting, and seafarers know both realities. Their experience of God can become very basic, either God’s presence or God’s absence, and they know that in the depths of their soul and, again, in some small way we’re privileged to hear their stories.

Chaplain blessing mariner: Beseeching Him to uphold you and fill you with His grace…

The Seamen's Church Institute of New York and New Jersey