BOB ABERNETHY, host: Secretary of Defense Robert Gates told the Associated Press this week that if the top military officer recommends an end to the Don’t Ask Don’t Tell policy relating to homosexuals he will okay the new rules before he retires the end of June. Gates also said he sees no barrier to that happening. Since Congress repealed Don’t Ask Don’t Tell last December, more than a million US troops have taken instruction in the new policy. Gates says that training has gone well. Still, there are concerns, especially among some military chaplains. Betty Rollin reports.

Gunnery Sergeant Taylor conducting Don’t Ask Don’t Tell training: Lance Corporal A, he’s gay. Lance Corporal B and Lance Corporal C are his roommates. They know he’s gay, or they think he’s gay, but due to the fact that he dresses in a certain way they request to move out of their room. Do they have that right?

BETTY ROLLIN, correspondent: Here at the Quantico Marine Corps base in Virginia, as well as at other military bases, they’ve been holding voluntary training sessions on the repeal of Don’t Ask Don’t Tell: What does it mean? What changes? What doesn’t change?

Training session slide presentation with narration: You are not expected to change your personal, religious, or moral beliefs; however, you are expected to treat all others with dignity and respect consistent with the core values that already exist within the Marine Corps.

ROLLIN: The Marines in this group didn’t seem to have any trouble with these instructions. 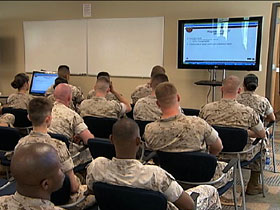 SERGEANT CRAIG TAYLOR:: I’m a Baptist, but the role that my religion plays is not really important because I have to adhere to the rules and regulations that are governed over me.

ROLLIN: A Pentagon study released last fall showed that a majority of US forces, 70 percent, said that serving with gays or lesbians would have no negative effect on them. But there was a very different response from forces fighting in Iraq and Afghanistan. Fifty-eight percent of combat Marines said they would prefer not to serve with gays. Another group that has voiced concerns about the repeal are chaplains. Of the 3,000 active-duty chaplains, a majority are conservative Christians. Brigadier General Douglas Lee has served over 31 years as both a reserve and active duty chaplain and now heads the joint commission that represents Presbyterian and Reformed chaplains. He is one of 66 retired chaplains who wrote a letter to President Obama and Secretary of Defense Gates urging them not to repeal Don’t Ask Don’t Tell. 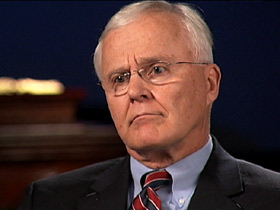 CHAPLAIN DOUGLAS LEE: Homosexuality is one of a multitude of sins. Chaplains essentially help people wrestle with the sins that beset them in their lives and try and give them encourage and hope and a way out of all that, and for the Christian the way out is Jesus Christ. For another religion it might be some other means. The problem with this repeal is that this particular sin is being legitimized as being normal and okay.

ROLLIN: Whereas some chaplains support the repeal, and all chaplains accept their obligation to minister to everyone, Chaplain Lee fears the conflict conservative Christian chaplains are bound to have when counseling openly gay service members.

LEE: Chaplains are concerned that when it comes to the bold preaching, teaching, counseling, marrying, burying, sacramental duties, that there would be challenges to those things if they were decided to speak against homosexuality.

ROLLIN: These chaplains fear that if they express what they really believe they might lose their jobs.

LEE: We believe there needs to be a freedom of conscience clause somewhere Congress has to wrestle with to make sure that chaplains and the troops have freedom of conscience when it comes to proclaiming their own particular faith, and of course they would do that. We would never want that proclamation to be done in a mean-spirited way or hateful way.

ROLLIN: The underlying cause for conservative chaplains’ difficulty with repeal is their belief that homosexuality, like all the other sins in the Bible, is a choice.

LEE: Just to say they can easily choose to get out of this, I wouldn’t say that. I would say it’d probably be a struggle for many. But I know people who have come out of the homosexual community and basically through Christ have actually changed their choices. 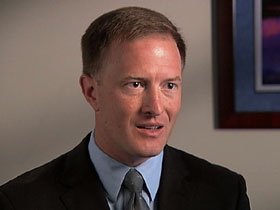 JONATHAN HOPKINS: My parents were devout Christians. My values are pretty consistent with theirs. I grew up in a town of 1,000 people, and within my parents’ view that didn’t fit with being gay, so of course I was straight. You had to be straight to be successful. But that was a lie. It was a lie to myself. I told my Mom for the first time when I was 30 or 31 years old and I said, Mom, I spent 20, nearly 20 years of my 30-year existence trying to fight this everywhere I could, or find some way around it, or finding, okay, maybe if I just find the right girl I won’t be gay. But that’s just impossible. It’s a lie.

ROLLIN: Jonathan Hopkins graduated fourth in his class at West Point and was deployed to Iraq and Afghanistan. He was awarded three bronze stars and was promoted unusually early in his career to Major. And then, last August, it was all over. Although he says many of his fellow soldiers knew he was gay and accepted him, a few didn’t and reported him to the commander. After a 14-month investigation, he was honorably discharged. Hopkins says throughout his military service he was afraid of this happening.

HOPKINS: Sometimes you might be scared of getting shot at, but you shouldn’t have to be scared of your own fellow service members turning you in for something that you can’t change. 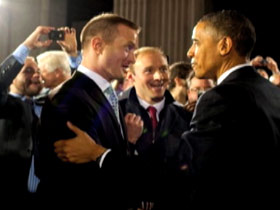 ROLLIN: Hopkins is now a graduate student at Georgetown University in Washington, DC and a spokesman for Outserve, an organization representing active-duty gays in the military. He says he is optimistic about the repeal and its future.

HOPKINS: Will repeal go through? Yes. And once that happens and nothing substantive goes wrong, then it’ll be a done deal.

ROLLIN: So the war is won, in effect?

ROLLIN: What is it?

ROLLIN: Under Don’t Ask Don’t Tell, 13,000 gay and lesbian members of the military were dismissed. The military plans to finish training for the repeal this summer. After that, if the president, secretary of defense, and chairman of the Joint Chiefs of Staff certify that the military is ready for this change, 60 days later the repeal becomes official.

ABERNETHY: The answer to that question about whether Marines can ask not to share a room with another Marine just because they say he’s gay is no.