FRED DE SAM LAZARO, Correspondent: Among emerging nations, Brazil is a leading power. It’s booming economy is now the world’s seventh largest. Yet this nation of 200 million remains very divided. Its poverty is on display along the hillsides, not far from Rio de Janeiro’s glittering skyline, or along the sidewalks of Sao Paolo, despite recent government attempts to address it.

MARIVALDO DA SILVA SANTOS: There’s still great inequality in Brazil. There still are people who don’t have a place to sleep, don’t have clothes, any happiness in their lives.

About 70 percent of Brazilians are Catholic. Church attendance has dropped sharply in recent decades, except in newer Protestant evangelical congregations. But the demand for church-run social services has not dropped.

Bom Parto, short in Portuguese for “our lady of good delivery,” is the biggest such provider in Brazil. It’s headed by Sister Judith Lupo. 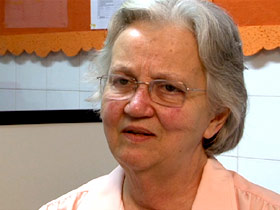 She grew up in a wealthy family, was educated in Brazil, the U.S. and France after joining her religious order, where she soon became its chief finance officer.

At Bom Parto, she combined government contracts with private philanthropy and built a single day care center three decades ago into an organization with 58 locations and 1100 employees, serving 10,000 people each day. It’s all pulled together with a modest $4.5 million annual budget—reflecting financial acumen; also a simple philosophy.

SISTER JUDITH LUPO: I think the first, first thing is to love people. They need money also to survive, but it’s not just to get money or to learn things, it’s to learn in a way that it’s with love.

DE SAM LAZARO: As an example of the approach, she says this homeless shelter provides much more than a roof and a meal for its 600-odd clients. There are baths, clinics and career counseling among other services—even entertainment, like this traditional dance called capoeira.

DA SILVA SANTOS: Bom Parto has given me continuity. It took me to college, it helped me understand public policies not only to help myself but others. It offers not just food and bathing services, it teaches about need to work, instruction, training, pleasure, culture. It enables you in a way.

DE SAM LAZARO: Thirty-six year old Santos is a poster child. He came here in 2002, an alcoholic down on his luck. His life is more than restored, he says. Bom Parto employs him and is also helping with part of the tuition to complete his degree in social work. 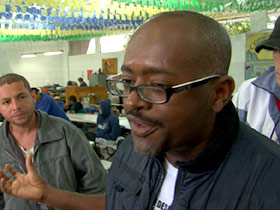 DA SILVA SANTOS: Sister Judith insists that people on her staff come out of places like this. She has this poem called “I Am You.” She’s put herself in our position, feeling our pain, feeling our situation. That’s how she’s able to help us and that’s the same thing she is getting us to do.

SISTER LUPO: I feel the young people and children, adolescents, all of them, they all need an opportunity. It’s, I don’t think poverty has to take them out of a normal life. They should not live always in a bad house. They should not be always in a favela. And to go out of those places, they need a good education.

DE SAM LAZARO: Poverty is endemic in Brazil despite its bountiful natural resources and a modern economy. Sister Judith blames much of it on an unequal education system that traces back to slavery, which was abolished in 1888.

Bom Parto serves a wide range of needs, caring for abandoned HIV-infected infants. Also destitute elderly. However the major focus is on education and training to enter the prosperous mainstream of Brazil’s economy.

On the outskirts of Sao Paolo, where many of the city’s poor reside, Bom Parto’s day care facility is at its capacity. It cares for 3,300 preschoolers across the city. Eventually, many of them will enter this school…

SISTER ADRIANNA APARACIDA ROMAO: Here in this place, we serve about 1,100 kids. And given our waiting list, we should have at least three spaces this big in order to serve all of our community. 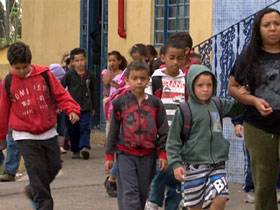 DE SAM LAZARO: Public education is widely perceived as substandard in Brazil, and that accounts for the strong demand for schools like this one, run by Bom Parto.

SISTER ADRIANNA: In the 27 years that this school has been here, we’ve seen great change, improvement in the community and in the lives of these children. The evidence is when we’re watching them during recess. They’re calmly interacting with their friends, not supervised, not gated in like the public schools, where they’re still very unruly. Here they’ve learned to behave.

LEANDRO AGUSTO DA SILVA, Shop Teacher: Traditionally this eastern edge of Sao Paolo has been excluded, marginalized. The general view is that people who come from here are not going to be able to climb the economic ladder. But we provide opportunities to the kids who are leaving here that differentiates them from the rest of the population in this area. We’ve already had several examples of students from this program that have graduated and gone on to work in the elite areas, other areas of the city.

DE SAM LAZARO: Some graduates have returned as teachers and mentors. 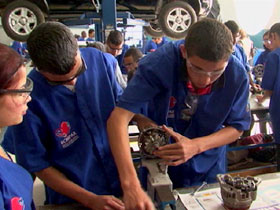 SUELEN RIBEIRO DE CAMARGO, Teacher: In terms of vehicle repair, maintenance, et cetera, I’ve always been interested. In terms of being a teacher, I thought maybe but my sister really pushed me to consider this. I didn’t think it would happen so soon after finishing this program. I was able to get several different apprenticeships and while doing that, this job opening came and I was invited to come back and teach here, and my whole family told me to jump at it. It was an honor for the whole family.

DE SAM LAZARO: About 25% of students here are female, keeping with a trend in which women—from the country’s president on down—are in jobs historically held by men.

SISTER LUPO: If you can cook well, you can repair car well.

DE SAM LAZARO: If you can cook well you can repair a car well?

SISTER LUPO: If you learn, why not?

DE SAM LAZARO: Asked about her own outlook, 68 year old sister Judith Lupo offered few words. They come from the scripture, she says.

SISTER LUPO: It’s from the gospel. We have to give opportunity to everybody. Everybody was created to have life and to have life in fullness.