Voiceover in video: Now we know, an unborn baby is a person. Mississipians! Vote Yes on 26…

TIM O’BRIEN, correspondent: Proponents insist Mississippi’s Amendment 26 is not so much about abortion as it is about the sanctity of human life.

BRAD PREWITT (“Yes on 26” Executive Director): We’re fighting for the preservation of the unborn in the state of Mississippi…

O’BRIEN: But if passed, the Amendment could make any abortion in the state murder, drawing the wrath of abortion rights advocates like Nancy Northup of the Center for Reproductive Rights.

NANCY NORTHUP (Center for Reproductive Rights): This measure is blatantly unconstitutional and we’ll be looking to stop it with the constitutional protections of the court.

O’BRIEN: Most birth control would still be allowed, but the Amendment could criminalize using the so-called “morning after pill” and put an end to embryonic stem cell research in the state. 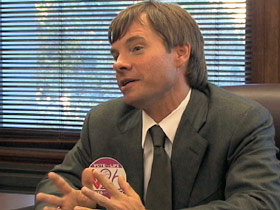 PREWITT: And we’ve stated unequivocally all along that if you’re intending to prevent a pregnancy, there is no problem with defining the personhood of the unborn. If you’re trying to end a pregnancy, then that’s another story.

O’BRIEN: Prewitt insists fertility treatment—in vitro fertilization—would not necessarily be banned, even though fertilized eggs are often discarded in the process.

PREWITT: That hit particularly close to home because I’m an IVF parent. And there’s nothing I would do as a leader of this campaign, uh, coalition, that would in any way seek to deny the joy that my wife, who’s a physician, and myself have had in our children.

O’BRIEN: It’s also unclear how the Amendment might be applied to ectopic or other dangerous pregnancies. There are, however, no exceptions for rape or incest. Without minimizing the horror of rape, supporters, including this rape victim, say abortion is not the answer.

Woman at podium: As a person who was raped and as a person who has had an abortion, I’m telling you that I’m am tired of using rape as an excuse. Who do we believe creates life? Did my rapist create the life inside of me? No. God Almighty created that life. (Applause) Do doctors and nurses in petri dishes create life? No! Jesus Christ creates life.

O’BRIEN: Amendment 26 has broad bi-partisan support in Mississippi and is expected to pass. Both the Democrat and Republican candidates for governor support it. 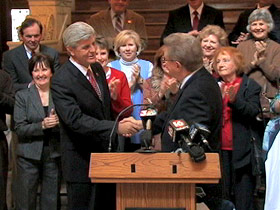 The Republican candidate, Phil Bryant—now the state’s lieutenant governor—is also a co-chairman of “Vote Yes on 26.”

LT. GOVERNOR PHIL BRYANT: (Speaking in recorded video) The Founding Fathers said that every American has the right to life, liberty and the pursuit of happiness. On November the 8th, we’re going to give that right to every child in America, beginning in Mississippi. We’ll see ya at the polls.

Now what we say in the law is for convenience sake, without due process, you can take that child’s life. I don’t believe that’s right. I think this is going to be a point for us to establish a concept, and the concept will be the rights of all human beings, including the unborn.

O’BRIEN: There’s no question the objective of Amendment 26 is to stop abortion. Campaign literature says as much, calling Tuesday’s election an “…opportunity to cast the vote the U.S. Supreme Court did not [in Roe vs. Wade.] We can stop abortion by declaring the unborn “persons” from the moment of conception.” 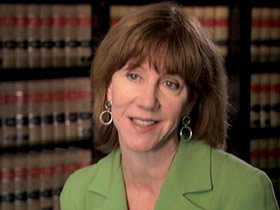 NORTHUP: This is an alarming and extreme measure that should be taken seriously. What it does is reveal how extreme the anti-choice movement is in the United States. They would like to see the “personhood” of a fertilized egg in every single one of the fifty states.

O’BRIEN: This Amendment would appear to be squarely at odds with everything the Supreme Court has said about abortion. The Amendment itself may have a very short life. And what worries abortion opponents even more is that any resulting Court fight could possibly end up expanding the right to choose abortion, rather than restricting it.

That might be one reason the staunchly pro-life Catholic Church in Mississippi, is standing on the sidelines in this case. Bishop Joseph Latino of the Jackson diocese said in a statement, “The Roman Catholic Church and her bishops are unequivocally pro-life; however, we do not always publicly support every initiative that comes before us in the name of pro-life.“

The National Right to Life Movement, which has launched some of the country’s biggest anti-abortion demonstrations, is also withholding support. It’s legal counsel, Jim Bopp, shares the objective of Amendment 26 but says the measure is doomed in the courts and could do more harm than good.

JIM BOPP (National Right to Life): The immediate harm from the adoption of the Amendment is that we have people who are spending time, money and effort pursuing what we think is a futile strategy. 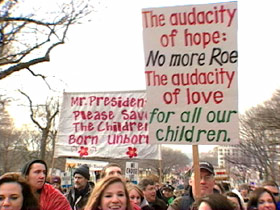 O’BRIEN: And there is uncertainty about how the Supreme Court might rule. Justice Ruth Bader Ginsburg, a supporter of abortion rights, is among the critics of Roe versus Wade, believing abortion should be protected under the right to equality, which is broadly identified in the Constitution, rather than under the right to privacy, which is ambiguous.

What if Ginsburg were to have the votes for a broad ruling finding abortion laws discriminate against women?

BOPP: If the right to abortion was reformulated in that way, it would mean that all the current restrictions on abortions that are saving perhaps a hundred thousand or more lives a year—parental notification, abortion funding restrictions, informed consent, waiting periods and all—would be struck down. So, losing is not risk-free.

O’BRIEN: This has raised a philosophical conundrum for at least some abortion opponents: Do you stand up for what you believe is right, even if it means a step back for the cause you passionately embrace?

LT. GOV. BRYANT: We believe that it may not be perfect, but don’t let the perfect become the enemy of the good, and we believe this is a good place to start.

PREWITT: I think we have to have a long view of history. I’m a history major, I think long. And I think that it may be that we don’t taste success with these endeavors in our lifetimes. But perhaps the next generation will.

O’BRIEN: Prewitt and other supporters of the “Personhood Amendment” say the ultimate goal would be a federal constitutional amendment and see a victory at the polls here Tuesday as a possible first step.