VIRGINIA RAGUIN (Professor of Art, College of the Holy Cross): Pilgrimages are undertaken because people want to move beyond their normal, mundane life. They can be a one-day pilgrimage, from one town to another town, on a particular feast day. They can be a weekend. They can be actually years.

In the past, pilgrimage really was vital in Christian religion, certainly in Muslim and in Buddhist. Only Islam requires the pilgrimage — the Hajj — so that it is one of the five pillars of Islam. However, that is nuanced: only if you are financially and physically able.

On pilgrimage, people experience the same activities; therefore, it produces a sense of camaraderie, a sense of sharing. 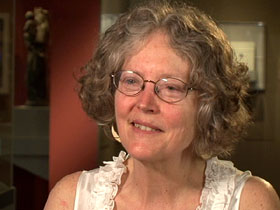 Constantly we see that the spirit is willing, but the flesh is weak. So that all three religions use handy objects to help focus people’s thoughts; and prayer beads are some of the most ubiquitous. Prayer rugs that were brought by people, especially on the Hajj, where they could kneel down and then pray during the days of their journey. Qur’ans, small ones, were often carried with people.

One of the most common kinds of souvenirs is absolutely the simplest: stones. Stones or dirt from the ground. People who have been on the Hajj and who have engaged in one of the rituals, which is the “stoning of Satan,” invariably they bring some of those stones home with them. You also have Muslims with clay from Karbala, or other holy places, pressed together, that they then use in prayer.

Although the doctrinal core of these religions differ, the practices that they use to help focus believers onto what is important, they are the same.

Often in these three religions, you have an experience of circumambulation, walking around a site. The Ka’ba is circumambulated during the performance of the Hajj; people walk seven times around this small building. Circumambulation, either of mountain or of a stupa or another holy site in the Buddhist religion is one of the most common ways of making a pilgrimage. And, for Christians, certainly they’ll circulate around the icons sometimes, or the statue, that they are venerating. People look for this physical activity that helps them find an interior focus. Physical hardship can be transformative. One of the things the Christians, the Buddhists, and the Muslims constantly come back to is humility. They make the effort, but God grants the grace.