KIM LAWTON, correspondent: For millennia, people have being trying to imagine what happens after death. Is there a heaven? Who gets in? And what happens to those who don’t?

LAWTON: Books trying to provide answers to these age-old questions continue to be bestsellers. One of them—Love Wins by Michigan megachurch pastor Rob Bell—has ignited an intense new debate, particularly among evangelical Christians.

REV. ROB BELL: A lot of people, the conception they were handed of the Christian faith is that you go around making judgments: So-and-so we know for sure is burning forever in that place. You don’t know that. That’s speculation. 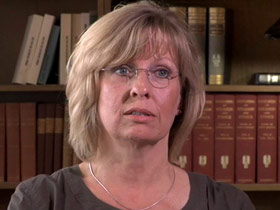 PROFESSOR MARY VANDEN BERG (Assistant Professor of Christian Theology, Calvin Theological Seminary): If you reject the kingdom of God, it doesn’t really look all that good for you.

Journalist Lisa Miller is author of the book Heaven: Our Enduring Fascination with the Afterlife.

MILLER: It’s a mistake to think you can even talk about God in the Western tradition without talking about heaven, right? How you get to heaven, the question of salvation is central to Judaism, Islam, and Christianity.

LAWTON: Evangelicals have been especially certain about their answers, with many saying that people must accept Jesus as their personal savior. 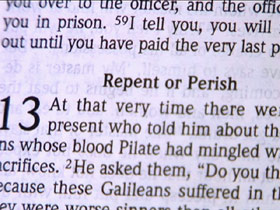 VANDEN BERG: There is one sure way to know that you will spend eternal life with God, in the presence of God, and that is through faith in Jesus Christ.

BELL: Gandhi is in hell? He is? And somebody knows this for sure? Will only a few select people make it to heaven, and will billions and billions of people burn forever in hell?

LAWTON: Bell offers a more expansive view. He’s pastor of the nondenominational Mars Hill Bible Church just outside Grand Rapids, which has some 10,000 weekly attenders. He’s also a popular speaker whose videos have a huge international following among younger evangelicals.

BELL: For me, interacting with countless people over the years who literally are carrying around an image, God is not good and God is not good because my grandmother died and at the funeral the pastor wanted us all to know for sure that my grandma was burning in torment forever.

LAWTON: Bell points to Scriptures where Jesus says he is restoring all things and drawing all people to himself. 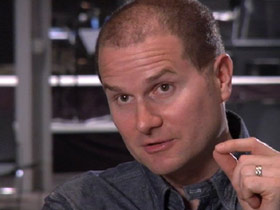 BELL: And Jesus tells stories in which the key character doesn’t give up on whatever is lost, and I think we should take that seriously. I don’t know what God has in mind, but I do know that this story that Jesus tells causes us to pause before we make any of those sorts of judgments. Be very careful, because God may be up to something way, way bigger than you’ve ever been able to comprehend.

LAWTON: Heaven, Bell says, is not a far-away place but a renewal of the earth that begins here and now. Bell believes the spectrum of people who will be part of it is “wide and expansive.” Hell, he says, is the consequence of choosing not to be part of God’s massive embrace.

BELL: God is throwing a party and everybody’s invited, but if you don’t want to come, you are given that option.

LAWTON: And in one of the most controversial parts of his book, Bell takes issue with the traditional Christian teaching that death ends any opportunity to make that choice.

VANDEN BERG: Maybe we can think about those things, and maybe we can wonder about those things, but the Bible’s pretty clear that when the end comes that’s the end. You don’t have a second chance. Now might there be? Could God do that? I don’t know of any theologian that would say God couldn’t. God can do whatever God wants to do, but what does the Bible say? The biblical text doesn’t indicate this at all. 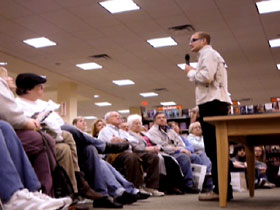 LAWTON: Vanden Berg says while she believes Bell raises some interesting questions, she is concerned that he is lifting out a few particular verses without taking the full biblical narrative into account.

LAWTON: Some evangelicals say Bell doesn’t give enough importance to the passages where biblical authors describe God’s judgment toward sin.

LAWTON: Many evangelicals have been severe in their condemnation of Bell. Some even called him a heretic.

TAYLOR: We care about people, and people who have grown up in the church, who have sung these same songs, who are being won over by somebody who has produced great videos and is a good communicator but is ultimately teaching a false Gospel. 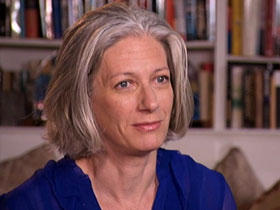 LAWTON: Miller says the conversation itself isn’t new, but the fact that it’s taking place so openly within evangelicalism is.

MILLER: This is a radical upheaval of that entire worldview. Then what does that do to your doctrine, to your creeds, to your world view, to your, to your mission for evangelism? What do you need to teach people if they’re going to get in anyway? It’s a real theological struggle.

LAWTON: In June, the Southern Baptist Convention voted to reaffirm its belief in the reality of hell as an “eternal, conscious punishment” for those who don’t accept Jesus.

Bell says he wants people to see that Jesus’ ultimate message was about love, not just avoiding hell.

BELL: Jesus didn’t come along and say, “You don’t want to be a part of that thing, do you?” No, he came along and said, “Trust me. Something big is going down. Here, here’s a taste.” Ah. People thought it was amazing.

LAWTON: He says he’s not bothered by those who accuse him of inciting a dangerous conversation.

BELL: It seems to me like the church would be the place that would lead the way in having dangerous conversations. I mean, isn’t that what faith is?

LAWTON: And the conversation isn’t ending anytime soon. Several more books about heaven and hell are being released over the next few weeks.