KIM LAWTON (Correspondent): In New York’s Times Square, it was an unexpected sight: Nestled amid ads for rum and hit TV shows, a sign proclaiming that Muslims are for peace. The billboard was part of a high-profile campaign by the Ahmadiyya Muslim Community USA.

HARRIS ZAFAR (National Spokesman, Ahmadiyya Muslim Community USA): We just want people to know if you’re going to judge Islam, judge it based off its true teachings, not based off of this political ideology that’s now all over the Internet and all over television.

LAWTON: Ahmadis have been active in several cities across the country sponsoring bus ads and leafleting drives, trying to get out the message that Muslims are for peace, for loyalty, and for life. They say ten years after 9/11, that message is more important than ever. 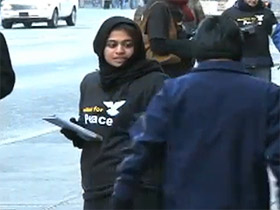 ZAFAR: We want to stress that there are Muslims, especially living in America, that emphasize on peace, liberty, democracy and just the freedoms that Americans love, and there have been so many people that ask where are these modern Muslims that promote these ideals, and we’ve been promoting these ideals for a long time.

LAWTON: The campaign has disturbed some Muslims who resent the idea of the controversial Ahmadiyya Muslim Community speaking for Islam. Many mainstream Muslims say they, too, hold those ideals, although they have significant theological differences with Ahmadis. John Esposito teaches Islamic studies at Georgetown University.

JOHN ESPOSITO (Professor of Islamic Studies, Georgetown University): The majority of Muslims would view the Ahmadiyya— the Ahmadiyya would either be seen as not Muslim, or they would certainly be seen as a very, very marginal group, you know, at best by most mainstream Muslims.

LAWTON: The Ahmadiyya Muslim Community is a reform movement that grew out of Sunni Islam. It was founded in 1889 in India by Mirza Ghulam Ahmad, who claimed to be the metaphorical second coming of Jesus and the divine guide, whose appearance was foretold by the Prophet Muhammad. Most Ahmadis believe he was the long-awaited mahdi or messiah. 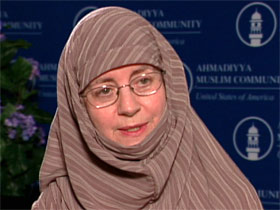 SALIHA MALIK (National President, Ahmadiyya Muslim Community USA Women’s Auxiliary): We believe that the promised messiah has come, as he was promised by the Holy Prophet so many years ago, 14 centuries ago. He came according to all those prophecies at the right time, and we have accepted him.

LAWTON: Naseem Mahdi is national vice-president and missionary-in-charge of the Ahmadiyya Muslim Community USA. He says Mirza Ghulam Ahmad came to bring Muslims back to the true teachings of Islam.

NASEEM MAHDI (National Vice President, Ahmadiyya Muslim Community USA): According to the prophecies of Prophet Muhammad, that when the messiah would come he will be a sort of an arbitrator. He used the word arbitrator. That he will tell you what is right and what is wrong, because with the passage of time, Muslims have practically abandoned the real teaching of Islam, the real teaching of the Holy Qur’an.

ESPOSITO: In Islam, the notion is that the Prophet Mohammad is the final prophet, the last of the prophets, and so then the question becomes for, in the eyes of many other Muslims, are these people really Muslims or not?

LAWTON: Many Ahmadis respond that while they do believe Muhammad was the final prophet to bring the law, that didn’t preclude a prophet like Mirza Ghulam Ahmad from coming to bring Muslims back to that final law. 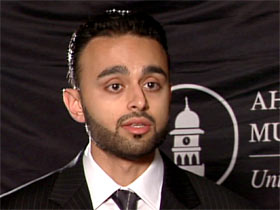 ZAFAR: He came to revive the teachings of God, and he came bringing the truth.

LAWTON: Mirza Ghulam Ahmad preached what he called “jihad of the pen” or persuasion through discourse, saying that violence was not necessary to defend and propagate Islam.

ESPOSITO: For many Muslims, and certainly in South Asia as the movement was developing, extraordinarily controversial, rejected, it was seen as the equivalent of heresy.

LAWTON: And that view persists. Today there are millions, some say tens of millions, of Ahmadi Muslims spread across 195 countries. In many parts of Asia and the Middle East they face severe persecution. In Pakistan, Ahmadis are even officially declared non-Muslim. They are legally forbidden to call themselves Muslims or their houses of worship mosques. And they are frequent targets of violence. 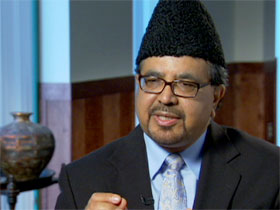 MAHDI: I go with this fear that during the night I might get a phone call that some of my very close loved ones have been kidnapped or killed or their properties have been looted, and this kind of fear is going on, and nobody can do anything.

LAWTON: Mahdi says it’s painful, but his faith forbids any kind of retaliation.

MAHDI: Islam promotes peace, and Islam does not need any kind of blood-shedding in the name of Islam.

LAWTON: According to Esposito, despite the persecution, Ahmadis have a strong missionary tradition.

ESPOSITO: Ahmadiyya in general are very concerned about spreading their faith. That’s very much part of what they do.

LAWTON: Ahmadis established a community in the US in 1920. They claim they were the first official American-Muslim organization. Their US headquarters is in Maryland, and they have thousands of members here. After the events of 9/11, Ahmadi leaders say they realized the need to do even more aggressive outreach, and the Muslims for Peace campaign began. They ratcheted the campaign up even further after the failed terrorism plot by a Muslim-American in Times Square. 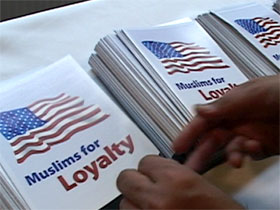 ZAFAR:We noticed that after the failed Times Square bombing attempt by Faisal Shahzad in May of 2010, that there was what people kept referring to as a deafening silence within the Muslim community. So that’s where we decided, well, hey, we’ve been here the longest, It’s incumbent upon us to do something.

LAWTON: They developed another project called Muslims for Loyalty, which emphasized the Prophet Muhammad’s teachings that Muslims should be loyal to the countries where they live.

LAWTON: For the tenth anniversary of 9/11, they launched a blood drive called Muslims for Life. Their goal was to collect 10,000 units of blood.

MAHDI: Ten-thousand units would save 30,000 lives, which would be ten times the lives lost on that day of heinous crime against humanity ten years ago. We are promoting a religion which gives life and not destruction, which promotes peace and not terrorism, and this is not just a statement, but giving our blood. 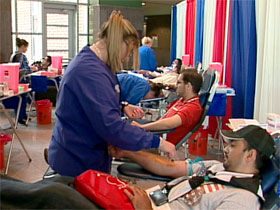 MALIK: We are given a voice. Our community, the women have a voice. And we have, we are very well educated, and we are very knowledgeable about our religion.

LAWTON: And in many communities, Ahmadis are deeply involved in interfaith dialogue, although that can complicate relationships with mainstream Muslims. Esposito says US Ahmadis have an influence beyond their numbers.

ESPOSITO: Although they are a relatively small percentage of the American Muslim community, they play a significant role. They’ve been out there doing their work, but far more, I think, well organized and visible in terms of the public-relation side of things.

LAWTON: Ahmadis say they are just trying to live out the tenets of their faith.

ZAFAR: As part of the Ahmadi Muslim community, we believe that we have a true message, and we want people to know it.

LAWTON: And they pledge to continue those efforts, despite the controversy they may generate.