LUCKY SEVERSON (Correspondent): Few cities around the world can match the stunning skyline of Hong Kong. Architecture here is a big deal, and so is the 3,000 year old Chinese practice of Feng Shui.  Few skyscrapers are constructed without the advice of a Feng Shui master, and Raymond Lo is one of a handful of “grand” masters.

SEVERSON: Nury Vittachi is an internationally syndicated columnist and author of over 30 books, including several about Feng Shui.

NURY VITTACHI (Author): One of the great things about Hong Kong is that it’s very rational and businesslike but at the same time, we believe in magic and we take it very seriously.

SEVERSON: Feng Shui is about more than tall buildings. People here practice it in their apartments and gardens and in their lives. 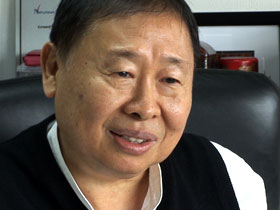 LO: Feng Shui means that it is an ancient Chinese knowledge which is talking about how the environment will affect people’s well-being. So the Chinese has discovered in their environment that different kind of energy. Some are good energy, which make you improve your health, improve your relationship with people and also improve your money. And there are negative energy which will do the opposite.

SEVERSON: Mr. Lo views himself as a scientist who, with the right tools, can actually measure good and bad energy.

LO: Of course this is an instrument we need. This is a compass, and those characters and numbers are actually the formula which the Feng Shui master, they have invented. So basically this is an instrument we use to measure the direction of the building and then based on the direction and based on the time the building was built, we can establish where is the good energy and where is the bad energy.

SEVERSON: Nury Vittachi’s columns are known for their humor and irony, and he finds plenty of both among the power structures of downtown Hong Kong.

VITTACHI: So you’d think this would be the most rational, number-focused place on earth, but in fact, Feng Shui rules even here.  As the building was being put up and finishing touches were being arranged, a Feng Shui master said, “Oh, it’s too regular. Everything is on a grid shape here and you’ve got to put something askew.”

SEVERSON: So plans for the escalators were changed. They are no longer perpendicular, they run askew. 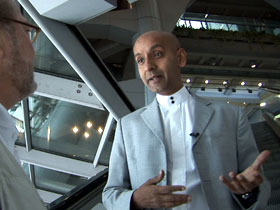 VITTACHI: It does seem to have worked because over the last 20 years since this building was created, HSBC has grown to become literally one of the biggest banks in the world.

SEVERSON: This being Hong Kong, our next building is another bank and more Feng Shui.

VITTACHI: This is the Standard Charter bank building which has taken the idea of mixing money and spirituality very seriously in that, although it’s the headquarters of a major bank, it has a church-like feel or a temple-like feel, right up to the extent of having stained glass windows. But instead of religious icons, you have the trappings of modernity, you have computers, a gold mobile phone, aircraft, that sort of thing.  It’s done in a good spirit and the community loves it.

SEVERSON: Our next building is the Bank of China which was built by an architect from the States who apparently didn’t realize that the diamond designed exterior is a negative shape in Feng Shui, and the diamonds were pointed directly at the governor’s house.

VITTACHI: And the governor lost his job, so they built a swimming pool between this and the governor’s house so that the water would take away the negative energy. It didn’t work. The replacement governor had a heart attack.

SEVERSON: Today the bank has a moat around it.

VITTACHI: You notice the fish are mostly different shades of gold, and they represent, of course, gold flowing around your life. So, definitely a prosperity theme at this bank. 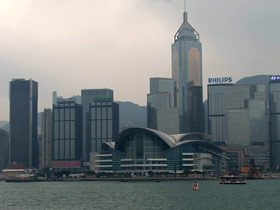 SEVERON: As an example of how seriously Hong Kong takes Feng Shui, in recent years, the city has spent more than 8 million dollars compensating people living next to construction sites because all that activity disturbed their Feng Shui.

Nury says some people go a little overboard when it comes to Feng Shui.

VITTACHI: If you move your desk over here a bit, you know, suddenly grandma will feel better. You know, if you move your desk a bit there, she’ll feel great. You move your desk too far and she dies. You know, there’s that sort of feng shui which I think is very… It’s clearly superstitious. But I think underpinning all that, there’s just good psychological sense. If you make your environment feel good, if you focus away from material things to spiritual things, it’s good for everybody.

LO: Actually Feng Shui encompass every walk of your life. Everything in life. There’s always a logic, a reason, behind things happening. So therefore you have an answer. If you don’t know Feng Shui, don’t care about Feng Shui, that means everything seems to be mystery.

SEVERSON: Raymond Lo has taught Feng Shui classes all over the world, including the U.S. where an increasing number of architects are using the practice in their house designs.

WILLIAM PAGE (Architect): The good energy that you are bringing in, it funnels into the front entrance. 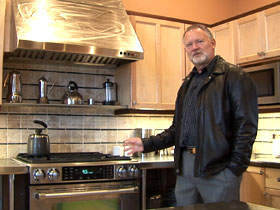 SEVERSON: William Page is a Seattle-based architect who builds and sells houses.  He uses Feng Shui principles in his designs.

SEVERSON: He says the Feng Shui must be working, at least for him.  It’s helped him sell houses.

PAGE: It is said that you should not have a stove directly across from a sink because one is fire and one is water and they do not mix. It is important not to have the head of the bed backing up against a bathroom because it tends to flush the energy down the drain.

SEVERSON: Back in Hong Kong, Nury Vittachi takes us to a Buddhist shrine in the middle of a lively business district.  In his view, the shrine is part of the Feng Shui of this neighborhood, the calming and centering part.

VITTACHI: There’s a big tree actually growing right here, you know, in between the floor and the ceiling of this temple.  What a lovely unity between man and nature.  I mean, I actually think it is a very religious community. Behind every temple, every village, every modern skyscrapers, including the stock exchange, you will find something like this. You’ll find a little shrine. Spirituality, Feng Shui, is very much woven deeply into the fabric of a very rational, scientific, business-obsessed community.

SEVERSON: A business community so rational that executives decided to shift the angle of the entrance to the Hong Kong Disneyland theme park by 12 degrees after a Feng Shui master said the change would result in the park’s prosperity.