BOB ABERNETHY, host:  In Egypt this week, one year after the beginning of protests that toppled President Mubarak, tens of thousands again took to the streets. Meanwhile, the lower house of the new parliament was sworn in. The majority of members are not young demonstrators, but members of two Islamist parties, which now hold almost three-quarters of the seats.

We talk today with Kate Seelye, recently back from Egypt. She has reported from the Middle East for many years, and is now a vice president at the Middle East Institute in Washington. Kate, welcome here, and it’s great you’re back, and how did it feel when you were in Cairo this time? What did it feel like?

KATE SEELYE (Vice President, Middle East Institute): Well, you know, I sensed, Bob, a kind of empowerment and excitement that I haven’t seen in Egypt for a very long time, and I’ve been reporting there for years. Egyptians overthrew a dictator. They’re now politically empowered. They found their voice. They’re engaged. But at the same time there are new fears and anxieties. The country has been very unstable the last year. The tourism industry has collapsed. Investment is down, and people are hurting economically. In fact, there are people today who are much worse off than they were a year ago. So there are fears. 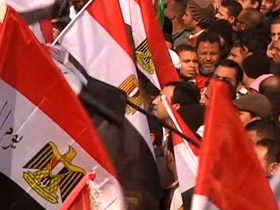 ABERNETHY: In those demonstrations that we saw pictures of, there were divisions, weren’t there? Some for one thing, some for…

SEELYE: Yes, it’s interesting. We’re seeing sort of a different take on the revolution. There’s one group that came out the other day, and they were celebrating, celebrating these newfound freedoms, and those were many of the people who did very well in the recent parliamentary elections. But there was another group, the young protesters who triggered the demonstrations last year who feel that the revolution is not over, the goals of the revolution have not been met, the ruling military council is still in office, and they are determined to keep protesting, so two different views of the same revolution.

ABERNETHY: What does it imply about the future for people there that in this new parliament there are three-quarters of the members who are Islamists? What does that say?

SEELYE: That’s right. Well, first let me explain who they are. There are two groups that did very well, the Muslim Brotherhood, a mainstream Islamist group that has been around for 80 years doing charitable work and is very popular among the Egyptian electorate and got 47 percent of the seats, and then a hardline, very conservative Islamist group, the Nour Party. Together, as you said, they make up nearly 75 percent. There is a concern that they will impose an Islamist agenda on Egypt. But the hope is that once in office, once held accountable they will both move more to the center, and that won’t be the case.

ABERNETHY: What about the minority of Christians in Egypt? What’s the future for them?

SEELYE: Well, they are worried. They have been facing more sectarian divisions. They’ve been the victims of more attacks on their churches, and they’re worried with an Islamist-dominated parliament in office. Their hope is that when Egypt starts to draft a new constitution, which it will do over the course of the next six months, that their rights and their freedoms will be guaranteed in this constitution, they will be safeguarded, and that is their best hope for the future.

ABERNETHY: And the women are a little nervous, too, aren’t they?

SEELYE: They’re a little nervous as well, and once again they are looking at this constitution and saying this is the chance to safeguard our rights.

ABERNETHY: Kate Seelye of the Middle East Institute. many thanks. Welcome home.

SEELYE: Thank you so much.