BOB ABERNETHY, host: For decades, religious organizations such as the National Council of Churches, the Catholic bishops, and others have been working with labor organizers to try to improve conditions for farm workers, and there’s been some success, most recently in the tomato fields of south Florida, where immigrants harvest nearly all the winter tomatoes this country grows. Our report is from Saul Gonzales in Immokalee, Florida.

SAUL GONZALEZ, correspondent: Florida may be better known for its oranges, but it’s tomatoes that rule in the farm fields surrounding the small town of Immokalee. In fact, during the winter months, nearly all of America’s domestically grown tomatoes, still green when they are picked, come from this part of south Florida, and it’s a large and poor immigrant workforce that’s essential in getting that crop from plant to plate.

Tomato harvesting is still very much a “by hand” work? There is no machine that exists that does this?

STEVE MCHAN: That is correct.

MCHAN: The production volume from here is somewhere around 1,200 to 1,400 boxes per acre, and we pack 25-pound boxes is what we’re averaging. 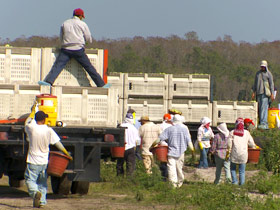 GONZALEZ: However, Florida’s tomato industry is a business that’s long been accused of exploiting its workforce through overwork, underpay, and mistreatment. That’s turned these fields into the frontlines of a high profile national campaign to improve the lives of farmworkers.

JORDAN BUCKLEY: People who work in agriculture are among the least paid, least protected workers in the whole country.

GONZALEZ: Jordan Buckley and his colleagues are with the Coalition of Immokalee Workers, CIW, and the Interfaith Action Network, which works with faith groups to help farmworkers.

BRIGITTE GYNTHER: For people of faith, for us this is a moral issue. You know, how the people who pick our food our treated.

GONZALEZ: Now to understand the plight of farmworkers you have to know something about their place in America’s industrial food economy.

BUCKLEY: They are some of the poorest workers here in our country, and yet not for a lack of hard work. It’s not some dearth of industriousness. In fact, the reason is because the increasing consolidation of purchasing among retailors. So where you have the fast food and food service and supermarkets squeezing their suppliers and demanding ever cheaper costs for their tomatoes, that’s resulted in growers squeezing their farmworkers, and that’s why farmworkers haven’t seen a real wage increase in upwards of three decades. 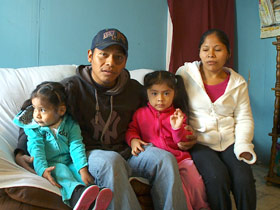 GONZALEZ: Florida’s tomato workers are usually paid by how much they pick, traditionally getting about 45 to 50 cents for every 32-pound bucket they fill. That means to make a day’s minimum wage, each worker has to pick two-and-a-half-tons of tomatoes a day. What does that kind of work pay mean for the daily lives of farmworkers and their families? Twenty-eight-year-old Darinal Sales struggles to support his wife and two girls on what he makes in the fields. Because four other farmworkers live in the same dilapidated trailer, his whole family shares one small room.

DARINAL SALES: It’s because of the situation at work that we live like this. Our pay just doesn’t last and allow us to live in better way.

GONZALEZ: Immokalee is a town full of young men from Mexico, Central America, and Haiti, many undocumented, who have come here to scratch out a better life for themselves by harvesting Florida’s tomato crops. Some of them end up victims of the industry’s worst abuses, including incidents of modern day slavery.

BUCKLEY: There have also now been nine federally prosecuted slavery operations in just the last 14 years here in Florida agriculture. 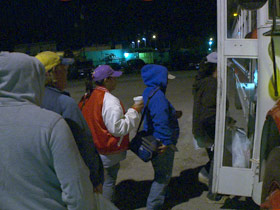 BUCKLEY: Yeah, literal slavery. Right here on Third and Boston we go down four blocks. That’s the site where workers were locked in the back of a cargo truck, literally shackled. We saw bruises on their wrists where they had been literally restrained by their employers.

GONZALEZ: Yet despite the dangers and pay, farmhands are eager to work. To see how eager, you’ve got to get up very early. Every morning in the pre-dawn hours this parking lot in downtown Immokalee becomes a giant open-air labor market. Hundreds of farmworkers come here looking to make contact with labor bosses. If they’re lucky they’ll be picked for another hard day of work in the tomato fields. The men and women selected are the ones boarding buses that take them to the fields. It’s in this parking lot that we met Aurelia Hinajosa, who’s worked in Immokalee’s tomato fields for nearly 30 years.

AURELIA HINAJOSA: Americans really like their vegetables and fruits, and who is going to pick it? The people born in this country have better kinds of work, and they’re not going to go to the fields.

GONZALEZ: But things are slowly starting to get better for Florida’s tomato field workers. Last year, after more than a decade of patient organizing work, the Coalition of Immokalee Workers reached a landmark agreement with growers and corporate tomato buyers like McDonalds and Burger King. The agreement gives farmworkers a penny more for every pound of tomatoes they pick. Now that doesn’t sound like much, but that one cent increase translates into an additional 32 cents for every bucket picked by workers. That in turn will boost each farmhand’s pay by about $5,000 a year. 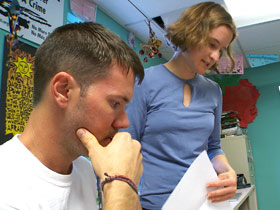 BUCKLEY: We are basically on the threshold of entering into this new industry in having rights protected and their being this consensus among buyers that we demand humane labor conditions in our supply chain.

GONZALEZ: The agreement has also made some in Florida’s powerful tomato industry question their past actions and attitudes.

SARAH GOLDBERGER: Historically, it has not been the poster child for good behavior and good treatment of its workers.

GONZALEZ: You admit to that?

GONZALEZ: Sarah Goldberger is a spokesperson for Pacific Tomato Growers. She says the agreement between workers and the tomato industry has replaced tension with cooperation.

GOLDBERGER: It has been so non-adversarial. It is a pleasure, quite honestly. 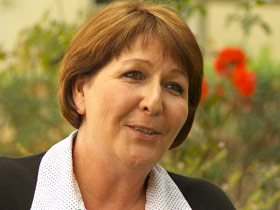 GONZALEZ: Other changes in the fields, like this one owned by Pacific Tomato, include greater access to drinking water and more rest periods, regular bathroom breaks, and a zero tolerance for verbal abuse and sexual harassment by field bosses. Now that the Coalition of Immokalee Workers and it allies have an agreement, they’re spreading the word about it. The small community radio station they run in Immokalee regularly tells workers listening about their rights, pay, and future organizing plans.

Radio (In Spanish): The campaign to improve the work conditions and pay in the state of Florida.

GONZALEZ: Worker advocate and former field hand Lucas Benitez met us at the early morning labor gathering to talk about how important these changes are to the men and women who pick America’s tomato crop.

LUCAS BENITEZ: That’s what we want, work with dignity. Where every worker, every person who goes to the fields feels pride in being part of the agricultural industry that is putting food on millions of tables every day and that the worker is getting paid enough to put food on the table of his own home.

GONZALEZ: However the Coalition of Immokalee Workers and its allies in religious and faith groups say they have much work left to do. That includes a new national campaign focused on  supermarket chains which have declined to  participate in the penny-per-pound pay agreement. 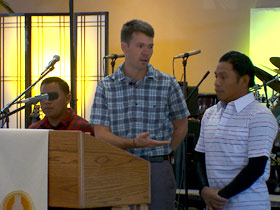 GONZALEZ: To keep pressure on the stores and to make sure gains are protected, farmworkers regularly reach out to religious leaders and congregations.

And so I’m joined by Darinal and Oscar from the CIW.

GONZALEZ: This morning, Jordan and workers from Immokalee, including Darinal Sales, are addressing a Presbyterian church in Naples, Florida. These speaking engagements are part of a sustained campaign to get people of faith thinking about their fairness and justice when they sit down to eat. Brigitte Gynther of Interfaith Action has been working in Immokalee for eight years on behalf of workers.

GYNTHER: You know, there are many times when we say grace we are grateful for the food on our plates. But where did that food travel? Who picked it? How did it get to us? And that is something we don’t often think about. But I think as people of faith we are called to think about the connections between us and the people who toil in the fields day in and day out to put food our plates.

GONZALEZ: For the men and women who pick Florida’s tomatoes their most important harvest has been some measure of justice and respect.