SAUL GONZALEZ, correspondent: At a Los Angeles ceremony, a group of Catholic women is about to commit an act of religious faith, but because they are women it’s an act the Vatican has condemned as a grave crime against the Roman Catholic Church and what the church sees as its divine laws.

“Bishop Olivia and members of the community, I am honored to testify on behalf of Jennifer’s readiness to be ordained to the priesthood.”

GONZALEZ: In a faith that prohibits females from becoming priests, these women are rebels, gathering here this afternoon to ordain this woman, Jennifer O’Malley, as a Catholic priest.

(to Jennifer O’Malley): Do you love the Catholic Church?

JENNIFER O’MALLEY: I do. It’s who I am, so I can’t leave. You know, I’ve gone to other churches and they’re beautiful, but I’m Catholic, and I can’t separate myself from that. 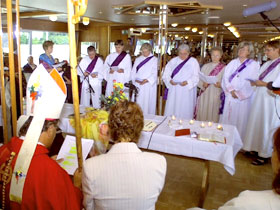 GONZALEZ: O’Malley is a member of a group called Roman Catholic Women Priests. It was started in 2002 when seven women, in an act of defiance against the Vatican, were ordained as priests by a male bishop in Europe. Ever since, the group’s been fighting for full acceptance of women into the priesthood. In the last decade, Roman Catholic Women Priests has ordained more than 100 women in ceremonies similar to this one for Jennifer O’Malley.

“We choose you our sister Jennifer for the order of priesthood. Thanks be to God.”

GONZALEZ: The ordinations are held in non-Catholic churches and definitely without the sanction or recognition of the Catholic Church. In fact, under Vatican policy O’Malley’s ordination, like the women who have done this before her, brings automatic excommunication. That means she’s barred from receiving the church’s sacraments or participating in the liturgy, unless she repents.

O’MALLEY: You know, in a sense it’s hurtful, and the fact that I’m being excommunicated by people who don’t even know me. But on the other hand, again, it is a consequence of doing what God has called me to do.

GONZALEZ: And your response to those who think at worst this is heresy, out and out, and at best some sort of a stunt, really. What do you say to them? 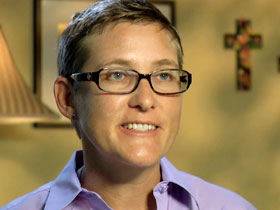 O’MALLEY: You know, it’s a call from God, and I believe it to be a true call, so those other things have to be put aside. And if that means breaking a law within the church, I know within myself, within my intellect and emotionally, that it is the right thing to do.

REV. THOMAS RAUSCH (Professor of Catholic Theology, Loyola Marymount University): The Catholic Church is not ready for the ordination of women right now. 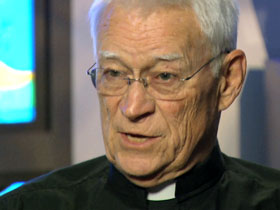 GONZALEZ: The theological justification most often cited for barring women from the Catholic priesthood goes back to Jesus’ choice of men only to be his disciples. That was followed by centuries of male-dominated customs developed within the church.

RAUSCH: I think that, you know, the culture was patriarchal. It was very much male-centered. Males were educated. They took roles of leadership. They played leading roles in the churches. So I think those cultural reasons really have to be taken into account in order to understand the exclusion of women from ordained ministry in the life of the church.

JANE VIA: When I chose to get ordained, it was because I feel that intelligent, articulate women must act to try to change the church.

GONZALEZ: Jane Via is a Catholic woman priest in San Diego.

VIA: I realized there are no clergymen who are going to stand up to this authoritarian, totalitarian, patriarchal, sexist system, because they have too much invested. 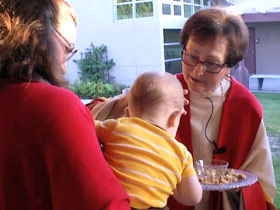 GONZALEZ: Via is one the most prominent figures in the women Catholic priests movement; partly that’s because of her unusual background. Along with having a PhD in theology, Via was also an assistant district attorney in San Diego for over 25 years. That courtroom experience, she says, has helped her in her present conflict with the leaders of the Catholic Church. Via says the evidence she’s gathered shows women had a prominent role in the early church.

GONZALEZ: Via leads a congregation in San Diego, with masses held in a borrowed Lutheran church.

Via blessing child: “Giles, God bless you and keep you…”

GONZALEZ: Although worship services here aren’t recognized by the local Catholic archdiocese, Via carries out all of the typical duties of a male priest. The people who attend mass here say that despite this congregation’s outsider status within the Catholic Church, they’re secure in their own religious identities. 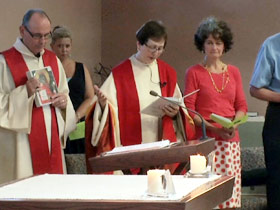 (to congregants) How do you identify yourself? What’s your faith?

(to congregant): What would you say to your fellow Catholics watching this who look at this and see a woman as priest and say that just isn’t real, and the mass you’ve gone to has no legitimacy.

Congregant: For me it is real. It’s as real as a male priest standing there. What’s the difference? Just because one is a woman and one is a man? I don’t think God distinguishes.

GONZALEZ: But Via acknowledges that her battle with the Catholic Church has cost her, from broken friendships to the pain of excommunication.

VIA: I remember being really grieved about not being able to be buried in a Catholic cemetery. That was sort of the ultimate exclusion. You can’t take the sacraments. I knew I would be excommunicated so I knew I could not accept the sacraments in a canonical Catholic church anymore, unless I was unknown to the population there, which is hard for me to be in San Diego.

GONZALEZ: What do you say to those who would say join another community of faith, join another faith, become something else, but don’t stay in the Catholic Church with your views. You would say what?

VIA: For me to just turn my back on this institution and say, “You’re all a bunch of worthless idiots, and I’m not participating anymore. I’m going to do my own thing. I’m going to go be Episcopalian and I can be a priest there” is completely irresponsible. This is my community. If everyone who is progressive-minded, progressive thinking, and willing to stand up to the Vatican leaves the church, the church will never change.

O’MALLEY (at altar): “…and for this we always thank and praise you.”

Ceremony: “We join with the saints of all times and places as they sing forever to your glory.”

GONZALEZ: Yet despite the hardening position of the church against their movement and its ordinations, the women Catholic priests say they aren’t retreating. They say they believe that although they might not see it in their own lifetimes, women will one day be allowed to become Roman Catholic priests—and with the support and blessings of the Vatican.