NAOMI NATALE (Founder and Director, "One Million Bones"): From the beginning, our goal was to collect a million handmade bones that would all be installed on the National Mall.

(speaking to students) We’re going to start by rolling out a log... 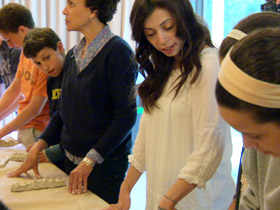 You know, I’ve made bones in temples, in churches, out in the street.

Everybody brings their own history with them, you know. They bring their own experiences, their own understanding of what does a bone mean to them, and what do our connections to each other mean to us.

RABBI M. BRUCE LUSTIG (Senior Rabbi, Washington Hebrew Congregation): I’m a child of a Holocaust survivor and so, when I saw the imagery of the bones, it evoked so many emotional feelings.

People of faith, there’s no belief that is worth anything that doesn’t have a corollary action. And so, if we believe that we should stand up for the people of Darfur, the South Sudan, Congo, Burma, all of these places where genocide has taken place, it's important that we act as well. 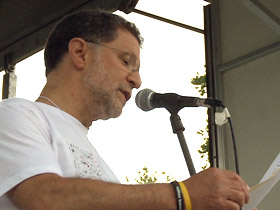 (Rabbi Lustig on National Mall): Sons and daughters, carry these bones. Let the souls of the millions who have died speak to us and speak through us. We all share the same bones. No matter your creed, no matter your color, we are all created in the image of God.

NATALE: The experience of carrying the bone and laying it out, it’s kind of like a journey from where you pick it up and where it goes. It’s very much of, like, a meditative experience, holding it.

If we can accept this idea that we belong to each other, then we can recognize our responsibility to one another.

EVE LUSTIG: My grandmother and great-uncle on my dad’s side are survivors of the Holocaust. Just being Jewish, you know, the Holocaust is a part of who I am, it’s a part of my tradition and part of my life. And there are so many people that didn’t survive, did not have a proper burial or their bodies weren’t found. This is a way, to me, of sort of honoring them.

NATALE: When I think about so many issues that are facing our world, I think, you know, the most successful solutions that we’ll come up with are ones where people can see the small but very significant role that they can play within that movement.

RABBI LUSTIG: Hopefully, in our children’s generation there won’t be a need for us to have consciousness-raising events about genocide, that on earth there will be no genocide.

One Million Bones was a public art installation of 1,000,000 bones on the National Mall in Washington, DC, over the weekend of June 8-10, 2013. It served as “a visible petition” and “a collaborative site of conscience,” according to organizer The Art of Revolution, to raise awareness of genocides and atrocities around the world and to remember victims and survivors in Sudan, South Sudan, the Democratic Republic of Congo, Burma, Somalia, and Syria.