KIM LAWTON, correspondent: Hours after the Supreme Court’s same-sex marriage decisions were announced, people of faith gathered at Washington’s National Cathedral for a prayer service of thanksgiving and celebration.

REV. GARY HALL (Washington National Cathedral): Today's Supreme Court rulings announce a new era for our country. It's an era in which married gay, lesbian, bisexual, and transgendered Americans can finally enjoy the same federal recognition and protection that our laws have for so long extended to their fellow citizens.

LAWTON: But for religious opponents of gay marriage, it was a day of disappointment. 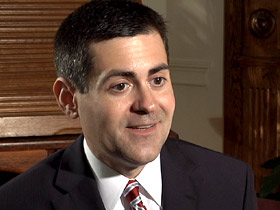 RUSSELL MOORE (Ethics & Religious Liberty Commission): Our churches are going to have to be ready to live in a world in which we cannot simply assume a definition of marriage and family.

LAWTON: According to the Pew Research Center, support for legal recognition of same-sex marriage continues to grow, including among religious Americans. About half of Catholics and white mainline Protestants now say they support gay marriage. But 42 percent of all Americans are still opposed to it, and much of the strongest opposition is rooted in religion. The vast majority of white evangelicals and black Protestants remain firmly against allowing gays and lesbians to marry.

Rev. Dennis Wiley of Covenant Baptist United Church of Christ is one of growing numbers of clergy who support gay marriage as a matter of justice.

REV. DENNIS WILEY (Covenant Baptist United Church of Christ): Straight people of faith like myself and others who have fought and continued to fight as allies and advocates alongside our lesbian, gay, bisexual, and transgender brothers and sisters have been vindicated for our steadfast and unwavering support of marriage equality.

LAWTON: National Cathedral Dean Gary Hall announced in January that the cathedral would welcome the celebration of same-sex weddings. 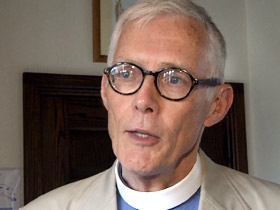 HALL: I think there's a good biblical case to be made that God made human beings in God's image and blessed human beings and pronounced us good. So, whoever we are in our sexual orientation, we are good. And therefore the church needs also to make the same tools for living that have been historically available to heterosexual couples available to homosexual couples as well.

LAWTON: Hall acknowledges that many mainline Protestant denominations are still wrestling over the issue. Although his own denomination, The Episcopal Church has approved rites to bless same-sex unions that can be adapted to use in weddings, it officially still defines marriage as between a man and a woman. Meanwhile, religious opponents of gay marriage say no Court decision or poll numbers will sway their position.

MOORE: We don’t believe that the state created marriage. Marriage did not come about through a legislative act or through court edict, so no government bureaucrat or no Supreme Court justice has the authority to re-define marriage. Marriage is designed by God and embedded in nature and is beyond the reach of the state.

LAWTON: Russell Moore is president of the Ethics and Religious Liberty Commission of the Southern Baptist Convention. He says he’s concerned about where the Court’s decisions may lead.

LAWTON: He and many other conservatives believe the rulings will burden the religious liberty of those who oppose gay marriage. Kim Daniels is an attorney and spokesperson for the president of the US Conference of Catholic Bishops, Cardinal Timothy Dolan. 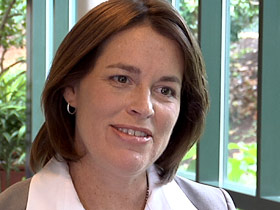 LAWTON: But, she says, the battle isn’t over.

DANIELS: This has really energized the movement for marriage redefinition, and at the same time it's energized those of us who believe that marriage is the union of a man and a woman for the sake of their children, is an important part of the common good of our country. And I know that we'll continue to contribute to this conversation, because Catholics witness to the joy of our teachings on marriage and family, and that’s something we'll continue to do.

MOORE: We need to be winsome, prophetic, speak to the outside culture and loving in persuasive ways and also train up countercultural communities that honor marriage and keep our marriages together and cultivate healthy marriages in the future.

LAWTON: Religious advocates of same-sex marriage are also promising to ramp up their grassroots efforts.

LAWTON: Given the depth of feelings on both sides, the conversation will continue for a long time to come.

“This has energized the movement for marriage redefinition, and at the same time it’s energized those of us who believe marriage is the union of a man and a woman for the sake of their children,” said Kim Daniels, an attorney and a spokeswoman for the president of the US Conference of Catholic Bishops.