BOB ABERNETHY, host: It’s good to have you with us this week of important and controversial Supreme Court decisions. Tim O’Brien reports on the Court’s rulings – on gay marriage, on voting rights and on race as a factor in admissions to colleges and universities. Then, Kim Lawton sums up the reactions of religious communities to the Court’s gay marriage decisions. Tim begins with affirmative action.

Strongly held disagreements over gay marriage are just as prevalent – perhaps more so – in religious communities as they are in the country as a whole, as Kim Lawton reports.

Kim and Tim are both here. Welcome. Tim, let me start with you. Where do we go from here, especially in California?

TIM O’BRIEN: Well in California, I think you are going to see gays and lesbians going to get their marriage licenses. It might not happen tonight, but it won’t be long. The Court cleared the way for that in allowing a district court decision to stand, throwing out Prop 8, California’s ban on same-sex marriage.

ABERNETHY: And what did you see in the votes in the Court that would lead you in that direction? 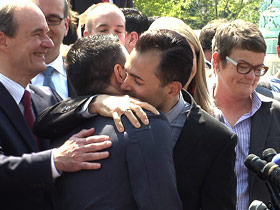 O’BRIEN: Well, the vote in the Court on that case, on the Prop 8 case, was purely on jurisdictional grounds. The vote on the DOMA case, the Defense of Marriage Act, was very interesting. You had five justices saying that this denies gays and lesbians equality and liberty guaranteed by the Constitution, and I think that says an awful lot, because that will carry down the road in other cases. I think this may be a precursor for a ruling that says any discrimination based on sexual orientation by the state is suspect and will only be upheld in extraordinary circumstances.

O’BRIEN: And that will stand today. Whether it stands tomorrow is an entirely different question.

KIM LAWTON: And that’s what I was hearing a lot this week, that this case really galvanized both sides in the faith community on this debate. It gave new energy to proponents of same-sex marriage to say we can go into these local states that ban it and make an argument to have those bans overturned. And among the religious people who are against same-sex marriage, they said this gives them the energy to maintain and to keep their position out there.

ABERNETHY: Energy on both sides, grounded in biblical tradition. 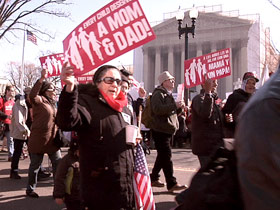 LAWTON: Right. For the religious opponents of same-sex marriage, they very much look to the Bible. They believe God ordained marriage as between a man and a woman, that it—and procreation is tied up in that—that it symbolizes in the Christian community Jesus’ relationship with the Church. So there are very deeply held theological reasons why they hold those positions. And for the religious proponents of same-sex marriage, they say when they look at the Bible they see an evolving view of marriage, and they also point to biblical values like justice and say compassion and justice should be at play here.

ABERNETHY: Did you sense—Tim, just a second—did you sense a momentum in the direction of accepting gay marriage within the religious communities?

LAWTON: Well, certainly the advocates feel that their position has been vindicated, but even among religious conservatives and opponents of same-sex marriage, polls show they say even though they don’t like it, it’s probably inevitable that it is here and it will happen.

ABERNETHY: Tim, what were you going to say? 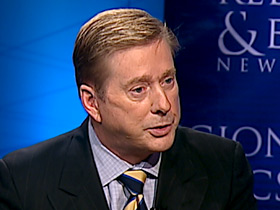 O’BRIEN: I was going to say you were talking about the biblical references. Well, one of the lower court judges in the DOMA case pointed out this is a civil action, and if you want to sanctify marriage you just have to go to a higher court.

LAWTON: It’s going to be interesting to see how, though, this, the DOMA ruling, is interpreted, how it’s implemented in terms of benefits, and the president and others this week said there will be religious freedom for people who hold a view against gay marriage, but I heard a lot of concern about religious liberty issues for people who hold that position and how that’s going to get worked out in terms of federal contracts, in terms of tax exemption, and is it just religious congregations, churches, that would be exempt from having to go along, or what about faith-based institutions, so I think a lot of legal wrangling yet to do.

ABERNETHY: I was going to ask you, you both think this opens the door to a lot more court action? 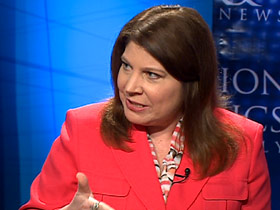 ABERNETHY: Tim, before we go, affirmative action: where, quickly, where does that stand now?

O’BRIEN: Well, about where it stood ten years ago: that it is suspect. Racial considerations may be allowed in university admissions policies, in this case only involved universities, not the employment sector, and if there’s a way of getting the diversity that university officials want that is race neutral, you’ve got to consider that first.

O’BRIEN: Well, the Court took a shot at a sacred cow, the 1965 Voting Rights Act, finding it was really an anachronism, and the Court’s correct in that the problems that the country was addressing back in 1965, the discrimination back then bears no resemblance to the world we live in today, yet no legislation has done more for African Americans than the 1965 Voting Rights Act, so anything that dilutes that law is, of course, very controversial.

LAWTON: And among religious, especially moderates and liberals and Black Protestants, this week I heard a lot of sadness about the voting rights decision, precisely, I think, because of the symbolic nature of it.

O’BRIEN: It is very symbolic, and I think the damage may be more symbolic than real.

ABERNETHY: Tim, Kim, many thanks to you both.

“The vote on the Defense of Marriage Act was very interesting. You had five justices saying this denies gays and lesbians equality and liberty guaranteed by the Constitution, and I think that says an awful lot because that will carry down the road in other cases. I think this may be a precursor for a ruling that says any discrimination based on sexual orientation by the state is suspect and will only be upheld in extraordinary circumstances.” Watch our conversation with correspondent Tim O’Brien, managing editor Kim Lawton, and host Bob Abernethy.