TIM O'BRIEN, correspondent: No issue had tied up the Court longer this year than whether to uphold affirmative action at the University of Texas at Austin, where being African-American helps in being admitted.

GREGORY VINCENT (Vice President, University of Texas at Austin): Diversity, and let’s be more pointed, racial diversity, is used as one factor among many.

O'BRIEN: The justices ruled that any distinctions based on race must be subjected to strict scrutiny, reaffirming a standard it had generally announced ten years ago. The Court did not quarrel with the university’s argument that it had a compelling interest in a diverse student body, but made clear that race-neutral remedies must be considered before any racial preferences will be allowed. 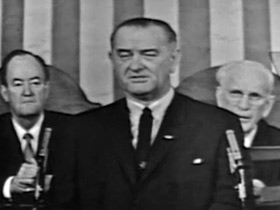 The next day, the justices entered an even deeper fray: voting rights. The Court dealt a lethal blow to a key provision of the 1965 Voting Rights Act, generally considered the crowning achievement of the Lyndon Johnson administration and the most important civil rights legislation of the twentieth century. Among other things, the 1965 law required nine states with a long history of racial discrimination—mostly in the South—to submit any new voting procedures to the Justice Department before it could be implemented. But Chief Justice John Roberts, for a five-judge majority, said the formula for determining which states are affected was too antiquated. “Our country has changed,” said Roberts. “While any racial discrimination in voting is too much, Congress must ensure that the legislation it passes to remedy that problem speaks to current conditions.”

If the affirmative action case was the longest awaited decision of the year, the same-sex marriage cases were the most anxiously awaited, and on Wednesday (June 26), the last day of the term, the Court delivered a pair of big victories for gay rights. The decisions brought jubilation to supporters of same-sex marriage, here running from the courthouse with victory literally in their hands. The justices let stand a lower court decision throwing out Prop 8, the California amendment that banned same-sex marriage in that state: 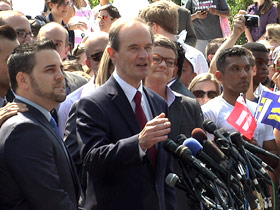 DAVID BOIES (Attorney): Our plaintiffs now get to go back to California and—together with every other citizen of California—marry the person they love.

CHRIS PERRY: And today we can go back and say to our own children, all four of our boys, your family is just as good as everybody else’s family. We love you as much as anybody else’s parents love their kids, and we’re going to be equal. Now we’re going to be married, and we will be equal to every other family in California. Thank you.

O'BRIEN: And, in another case, the justices found the federal Defense of Marriage Act, or DOMA, unconstitutional. The law denies same-sex couples the federal benefits routinely allowed heterosexual couples, such as the right to file a joint return. DOMA was challenged by 83-year-old Edie Windsor, whose relationship with Thea Spayer spanned more than 40 years. The two were married in 2007, but Thea passed away two years later, leaving the bulk of her estate to Edie. Along with it came a federal estate tax of $363,000. Had Thea been male, Edie would have qualified for the federal exemption, but under DOMA she had to pay. This week the Supreme Court found such disparate treatment violates the Constitution’s guarantees of liberty and equality. In New York, Edie Windsor said she cried when she learned of the high Court’s decision: 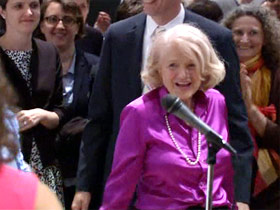 EDIE WINDSOR (Plaintiff:) We won everything we asked and hoped for. Wow!

O'BRIEN: The opinion was written by Justice Anthony Kennedy, who concluded “that the principal purpose and the necessary effect of this law are to demean those persons who are in a lawful same-sex marriage.” Kennedy, a Reagan appointee, is emerging as the Court's resident champion for gay rights. This is the third major case in which he has provided the critical fifth vote for victory.

O'BRIEN: When the case was argued last March, several justices suggested the country might not be ready for a ruling that would require all states to recognize same-sex marriage. If nothing else, this week's rulings give the country some notice--and some time.

“Within five years we will bring marriage equality to all 50 states in this vast county,” said Chad Griffith, a board member of the American Foundation for Equal Rights.