BOB ABERNETHY, host: Muslims around the world this week began their month-long observance of Ramadan, when they fast from sunrise to sunset.

In Egypt, the holiday falls amid continued unrest after the military’s removal from power of former president Mohamed Morsi. Morsi’s political party, the Muslim Brotherhood said it will not cooperate with the interim government and vowed to continue protesting. Tensions were particularly high after the military fired on Brotherhood protesters, killing more than 50 people. One of country’s top Muslim clerics called for an end to bloodshed and warned both sides against dragging the country into civil war.

I am now joined by Kate Seelye, senior vice president of the non-partisan Middle East Institute. She was a long time correspondent in the Middle East and has reported from there for, among others, this program. Kate, welcome. 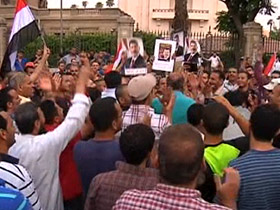 ABERNETHY: You’ve been to Egypt many times. As you look at it from here, what do you see? How do you characterize the mess it’s in?

SEELYE: Well Egypt is facing a very challenging situation as it transitions from an authoritarian regime to a democracy in the future. It’s still very much along a transitional path.

ABERNETHY: But, how do you describe what’s going on?

SEELYE: Well, you know, there are two different views of what just happened. There are those who say that a coup just took place, that a legitimately elected government was just overthrown. You now have the military in office that is rounding up the very Islamists that were ruling Egypt just, you know, a few weeks ago, putting them in prison and closing down the media. You have liberals on the other hand, who supported the recent popular uprising, who say this is the very best thing that could have ever happened to Egypt. They say Morsi, the president, was incompetent, that he was authoritarian, as authoritarian as Mubarak. And they note that the economy was collapsing. There were two months left of wheat supplies. Now, in response to what’s just happened, Gulf countries have committed twelve billion dollars to Egypt. The new prime minister is a renowned economist and the liberals say there’s hope that Egypt will become prosperous and stable once again.

ABERNETHY: But they had elections. How can they...Morsi was freely elected. 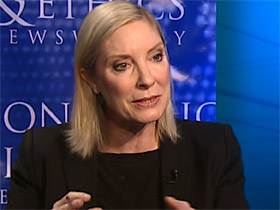 SEELYE: Absolutely. And there are those who say that this is very bad for the future of democracy in Egypt. It’s been a real setback for democracy. There have been several elections since the overthrow of Mubarak. They have all been annulled. And yet on the other hand many liberals feel that the direction the country was going in under the democratically-elected Muslim Brotherhood Islamist leadership was very, very bad and they didn’t want to continue in that direction.

ABERNETHY: How much was just because they didn’t like what the government was doing and how much of it had to do with Islam?

SEELYE: Well it had nothing to do with Islam. It had everything to do with this particular government which was the first Islamist government in Egypt’s history. So how did they rule? Well, they were incompetent because they’ve never had a chance to rule before. They were a party that was banned for decades. They’ve never had experience running anything. So they were incompetent. They were authoritarian. They were not inclusive. They were dismissive of liberals, women and minorities. So in general people didn’t like how this Islamist government was ruling. They also feared that they would try to Islamize the state, make it more Islamist. And we saw that in the new constitution which they pushed through in January in which many of the clauses were once again not very respectful of women, minorities and others. And so I think Egyptians just rose up and said we don’t like the direction Egypt is going in. It’s not because we don’t love Muslims – most of us are Muslims – but we don’t like the idea of an Islamist Egypt.

ABERNETHY: That’s interesting. What about the Copts, the Christians there? What’s going on with them?

SEELYE: Well they’re much relieved today. They suffered under the Morsi government for the past year. What democracy did in Egypt was it brought into office more Islamists and Islamists that are more, I would, say radical than the Muslim Brotherhood who call Christians heretics and who were responsible for attacks against Christian businesses and churches and homes. But Morsi also created a hostile environment. One of his key clerics during Easter called upon Muslims not to say happy Easter to their Christian neighbors cause that would be unIslamic. So under Morsi, Christians suffered and they’ve been leaving the country in droves ever since.

ABERNETHY: And still are.

SEELYE: And still are.

ABERNETHY: Kate Seelye of the Middle East Institute. Many thanks to you.

SEELYE: Thank you so much.

“I think Egyptians just rose up and said we don’t like the direction Egypt is going in. It’s not because we don’t love Muslims – most of us are Muslims – but we don’t like the idea of an Islamist Egypt,” says Kate Seelye, senior vice president of the non-partisan Middle East Institute. Watch our discussion with her about the ongoing unrest in Egypt in the wake of Mohamed Morsi’s removal from office.

Ramadan on the Road