KIM LAWTON, correspondent: This is the Children’s Museum of Indianapolis, the largest children’s museum in the world. It’s a place for fun, but the museum has also addressed some difficult subjects, including the Holocaust, segregation, and AIDs. For the past few months, the museum has taken on yet another potentially controversial subject: world religions. 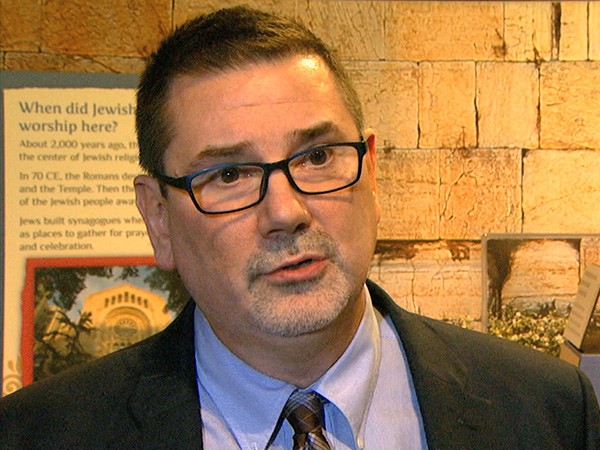 LAWTON: The Sacred Journeys exhibit is a partnership with National Geographic, funded by the Lilly Endowment. It follows children and families of several faiths as they participate in religious pilgrimages and rituals. In addition to covering religious history and culture, the exhibit explores contemporary beliefs and practices, topics rarely addressed by other museums, especially those for children.

CARRON: We wanted children to not only understand what they maybe learn in Sunday school, but to also know why the girl down the block dresses the way she does, why that boy in school was off for the holiday he was off for. What people believe and how they practice what they believe influences what people do all over the world, and it influences the people in your neighborhood.

UNIDENTIFIED GUIDE: Now this really large cube is called the Kaaba, and it’s covered in a silk cloth called a Kiswaa. Can you say that with me? Very good.

LAWTON: The Sacred Journeys exhibit includes loaned artifacts such as fabric from the Kaaba in Mecca, a throne built for the Dalai Lama, pieces from a Gutenberg Bible and the Dead Sea Scrolls, a stone from the Western Wall in Jerusalem, Jewish objects taken into space by Indiana astronaut David Wolf, a replica of the Shroud of Turin, and the Hindu deity Ganesh. Buddhist monks created a mandala, an intricate geometric design made from multicolored grains of sand. In the Buddhist tradition, mandalas are eventually destroyed as a demonstration of the impermanence of life. 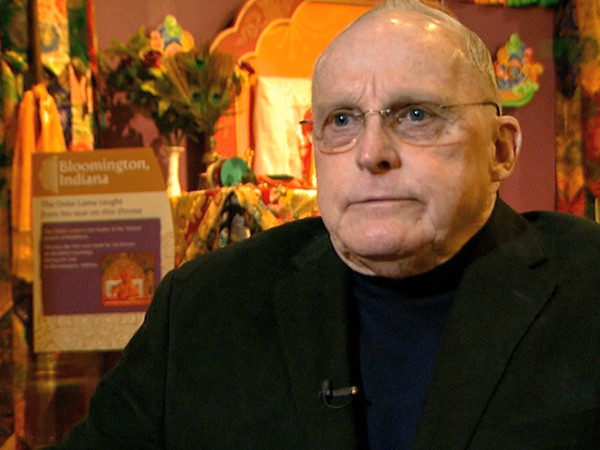 As a result of immigration, experts say in the last 50 years the US has become one of the most religiously diverse countries in history.

PROFESSOR RAYMOND WILLIAMS (Humanities Department, Wabash College): In 1965, we opened up the door to people from every country, every religion, every tradition, every culture, and that has created a vibrant period of American life. But it’s not been an easy one, and that creates the fear and anxiety. People are a little afraid of religion and diversity and change that’s happening so rapidly.

LAWTON: Prominent religion scholar Raymond Williams from Wabash College headed an interfaith group of advisors for the exhibit. He says fear and ignorance are why more education is needed.

WILLIAMS: You can't build a democracy or a free society or a civic life on fear and hatred. It has to be built on knowledge and hope.

LAWTON: Many children learn about their own faith tradition in their family’s congregations or in religious schools. But there are not a lot of forums where they can learn about other religions. 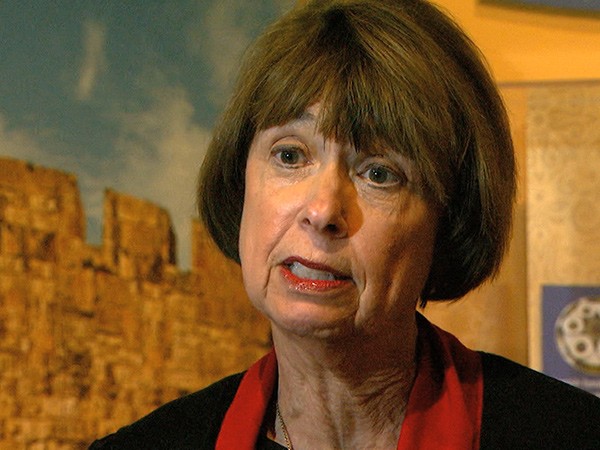 LAWTON: Rabbi Sandy Sasso, director of religion, spirituality and the arts at Butler University, was another advisor.

RABBI SANDY SASSO (Butler University): We are so afraid in public school to touch the subject of religion for fear that we’re proselytizing, and there is a legitimate concern there. However, we can’t really understand our culture or our civilization without understanding religion.

LAWTON: Some public schools are teaching about religion, although rarely at the elementary level. Other curriculums have generated controversy because of parental fears that they favor one religion or are too critical of another. It may be tricky, but experts say religion can successfully be addressed in a public arena, as long as constitutional prohibitions against advancing a particular religion are strictly followed.

WILLIAMS: Public schools, government cannot teach or force people into a religious belief or practice. And so the public schools can teach about religion, but they can’t propagate a particular religion, and the line between that is fairly narrow.

LAWTON: Sasso has written several bestselling children’s books about religion. She argues the topic can, and should, be addressed at a very early age.

SASSO: All children have an innate spirituality, and they like to ask the big questions. It’s really we who are adults who are afraid of those questions. Children are not. 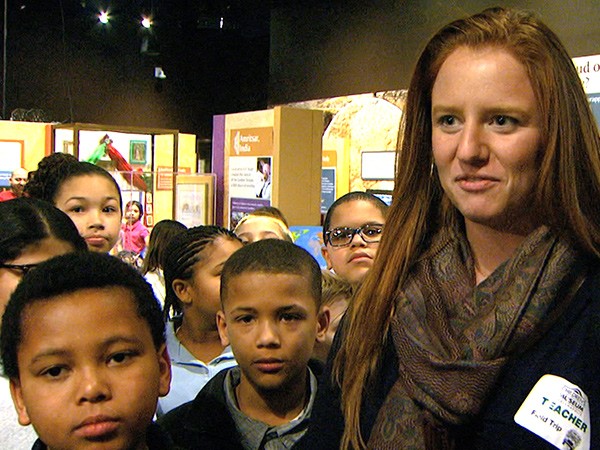 LAWTON: One of Sasso’s books is about Anne Frank. She strongly believes children are able to handle even difficult themes like the Holocaust.

LAWTON: She says that includes looking at commonalities between faiths, but not shying away from the differences.

SASSO: Sometimes I fear that in order to try to teach tolerance that we say we’re all alike, and we forget to acknowledge our distinctions. And it is in acknowledging our differences and celebrating those differences that we come to better understand one another and ultimately live together in a more harmonious way.

LAWTON: The goal of mutual understanding is why teachers from Trinity Lutheran School in Indianapolis brought their students to the Sacred Journeys exhibit.

HANNAH JUNG (Teacher): If we come from a place of understanding where other people come from, it helps us to be able to work together, to help improve society and all the things that we find important to us. 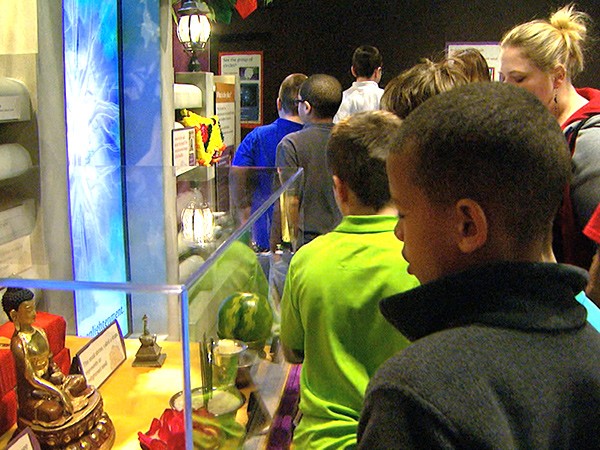 SASSO: If the big questions of my life are addressed by my faith, then how can I not want to understand those questions and how people grapple with them in other faiths?

LAWTON: Education, Sasso says, helps counter stereotypes about others that are often highlighted in the media.

SASSO: If children have not learned anything about Islam or about Judaism, then how are they going to respond to that? They have no basis in which to counter those statements.

LAWTON: Officials at the Children’s Museum say they’ve been surprised by the positive reception the Sacred Journeys exhibit has received.

CARRON: We sort of went into this expecting the worst might happen, that people would not be willing to learn about others' faiths. And what we’ve experienced in many ways is the best. We know from our evaluations that the conversations continue once the families go home.

LAWTON: After the exhibit closes later this month, it will travel to the Mayborn Museum at Baylor University. Several other museums across the country have contacted officials here asking for advice about how they, too, can tackle religion.

The US is one of the most religiously diverse nations in history, and many experts believe it is important that children learn about world religions, even at an early age.  But there are not many public forums where they can learn about faith traditions other than their own. Correspondent Kim Lawton visited the Children’s Museum of Indianapolis, which for the last several months has featured a National Geographic exhibition called Sacred Journeys. Lawton speaks with teachers, advisors, and scholars, including Professor Raymond Williams of Wabash College, who explains why education about religion is so necessary: “You cannot build a democracy on fear and hatred. It has to be built on knowledge and hope.”

Faith and Family in America