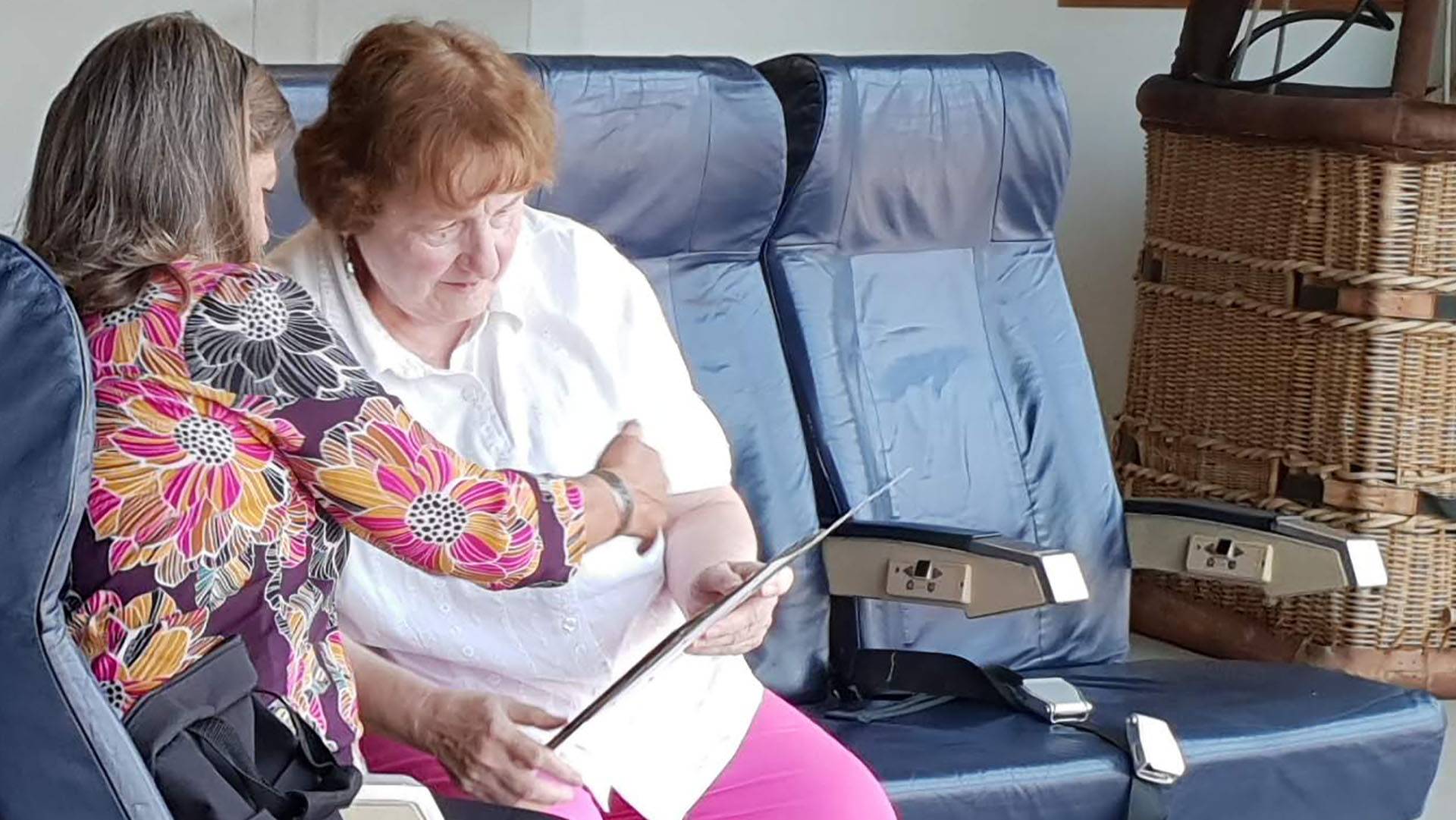 Lynn Rippelmeyer speaks with PBS about the role model who impacted her career during her time as a young pilot and offers her advice to others on the key to success.

PBS: Your interest in flying first piqued when you were in college. It was there that you learned that women were not permitted to sign up for aviation classes as an elective, and yet you continued to find a way to fly after you graduated, jumping over numerous hurdles to get to this point.

Do you have advice for women now who might be experiencing similar obstacles? 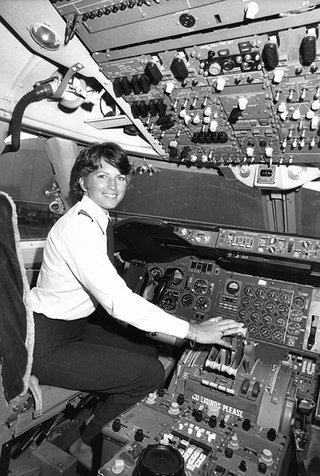 Lynn in the cockpit of a plane.Courtesy Photo

Lynn Rippelmeyer: I give a presentation called the "4 C’s of Succccess," which I think covers most everything it takes. They are character, connection, competence, celebration. But those things can mean very different things to different people. For me this is the description of each category:

- Be a good person – kind and helpful. People like helping people they see helping others.

- Be willing to go outside your comfort zone, try new things to learn and grow. The road to a destination isn’t always a straight shot, but may have may twists and turns along the way you shouldn’t miss.

- You can learn something from every experience. Sometimes the negative ones, the mistakes, give the greatest lessons.

- Be open to an alternative destination. Keep trying, looking, experimenting to learn what it is that is your gift, your ability, that causes you pleasure, makes you want to get up in the morning. If doors open, keep going. If they keep slamming shut, maybe there's a reason. It's like a relationship: It takes work, but shouldn't be an on-going struggle

- Don’t give up when it gets tough. Take one step to get closer to the goal each day no matter how small.

- Be honest. People don’t like being around liars [and] manipulators.

- Admit mistakes, apologize when appropriate. Learn from them; they are great teachers.

- Have no fear. Don't be concerned with what others, friends, family think or say about your choices.

- If any of this takes a change you find difficult, seek help. Learn about yourself and how to good as a person to be good at a career.

- Network with others in your chosen profession.

- Create friendships, a support system. Support others on their journeys.

- Surround yourself with supportive, happy, kind people. Be that person for others. Avoid, run from, any form of abuse.

- Connect to a higher power. There will be times when family and friends can’t be or aren’t there for you.You need to be able to count on your inner strength. Know that you aren't alone but a part of something bigger than self. Have a belief system that is there for you, giving you the support, creative energy, love, confidence to continue when humans don't. You have the support of the universe to be who you want to be.

"It was a 'normal' flight in all respects, except that the captain was female."

- Work hard to be the best you can. In a man’s world you have to be as good as the best to be acceptable. They are considered competent until/unless proven otherwise. You will [be] considered incompetent until you prove otherwise. It’s not a fair, level playing field, but you’re in the game. Learn to manage it.

- There are so many fine lines for us to walk: getting upset [but] not having a hissy fit, being one of the guys, but not manly, [being] attractive, but not provocative, [being] friendly but not flirty. There are whole books on this.

- Give thanks continually for what you already have: health, intellect, an education, freedom, spirit, friends.

- Celebrate each step along the way.

PBS: You were the first woman to captain a Boeing 747 jumbo jet across the Atlantic Ocean. Can you tell us more about this momentous occasion in your life and the events of that day?

Lynn: Transatlantic flights always take off in the evening, so they can land at their destination during daylight hours. There’s the usual routine things that have to be done when you will be gone for several days. I think it was quite undramatic.

By 1984, I had flown to England often during my career as a TWA flight attendant, had been an airline pilot for seven years, a captain for three, and had flown the B-747 on transatlantic flights for a year at a prior airline. The training was extensive and she (the 747) was my favorite airplane. I didn't expect there to be any "surprises" or anything I hadn't done or seen before. I knew my crewmembers to be supportive, a good team. I was really looking forward to it. 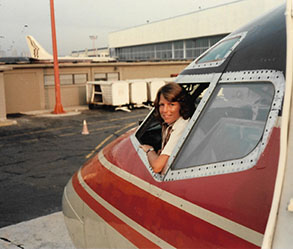 Lynn in the cockpit.Courtesy Photo

There really wasn't much hoopla about our departure from Newark. I thought, "How nice that female pilots were so commonplace to not be worthy of news coverage." My cabin crew was very proud of me and made announcements to let the passengers know they were part of this historic event. I don't think any passengers had a negative reaction (some did on later flights). It was a "normal" flight in all respects, except that the captain was female.

What WAS a surprise was the welcome we received in England! There, female pilots were unheard of, especially on the Jumbo Jet. There were photographers, newspaper reporters, magazine writers waiting in line to come up to the cockpit, to take photos outside. There were some intelligent questions and some were irritating.

"My hope for women in aviation is that we become so commonplace that it is no big deal."

I had been up all night and was running on adrenaline. I knew any make-up I had once put on was long gone and I had worn a heavy headset all night, so any "hairdo" was now a cap. I had to hope my personality and accomplishment made up for any lack of beauty. At some point when it was obvious I couldn't put words together, they allowed me to go to the hotel. I promised to do the interviews we didn't have time for on my next trip in a week.

The photos from that day were "put out on the wire," made available to newspapers around the world in all languages. It was in Parade, Cosmopolitan, and, my favorite, Scholastic News. Later that year, I was honored at England's Woman of the Year award ceremony in Leeds. I was the first American to be so honored. It was Cinderella-like.

PBS: We learn that there are 7,500 female commercial airline pilots in the world right now and that this number is still growing. What is your hope for the future of women in this industry and women in the workforce as a whole?

Lynn: My hope for women in aviation is that we become so commonplace that it is no big deal. Wouldn't it be great if it were normal for people, men and women alike, to find what it is they can do - want to do - and give the gift they were born to give. I remember a young first officer shocked when I told him there was a time when women were not allowed to be airline pilots [and] couldn't even apply for the job. He thought I was joking. I was thrilled. 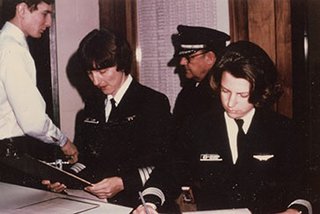 PBS: There’s a moment during your reunion when Emilie laughs at an old photo of herself saying, “I really thought that I was something,” later noting that she hadn’t realized how awe-inspiring she had been to you.

Did her perspective of herself surprise you at all? What did it mean to you in that moment to be able to tell her that she was inspiring and how much she impacted your life?

I think she was referring to her unsmiling, stern expression - so different than she is now.  At Air Illinois, I was 26, she was 36. I guess she didn't think we had a lot in common other than being pilots. We never hung out together or talked much, so it doesn't surprise me that she had no idea what an impact she had on me just by doing what she was doing: being a female captain.

It made me want to go back to those TWA pilots and tell them they were wrong. A female could be a captain - and a good one. She seemed to take it all for granted; it was no big deal, just normal.

The fact that she had no idea what an impact she had at the time would make me argue that she really WAS something but had no idea how much. It's hard to express the impact a role model has - seeing someone do what you want to do and having been told (by supposed experts) that it will never happen. A role model like Emilie being a captain literally made the "impossible" possible. I'm sure I didn't have the maturity, confidence, ability to put that into words for her then. So, it was really nice to be able to do it 40 years later.