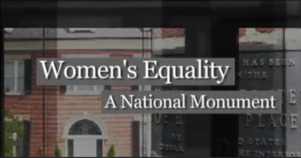 This week on a special documentary episode of To The Contrary, Bonnie Erbe explores the historic Belmont Paul Women’s Equality National Monument, the final headquarters of the National Woman’s Party. Declared a national monument in 2016 by President Barack Obama, the 200-year-old home sitting on Capitol Hill in Washington D.C. is a treasure trove of the Women’s Suffrage Movement.

With the country’s first feminist library being housed in the Belmont Paul Women’s Equality National Monument, Bonnie reports on the work done by Alice Paul and other suffragists who lived in this house. The impressive collection showcases their push for the Equal Rights Amendment and women’s equality all around.

“Yes we do. Our hundredth anniversary is this year in 2016 and we are not fading. We are still working on the unfinished business for women's equality. And also working to conserve the priceless pieces in the collection.”

How did the women’s suffrage movement start?

“Alice Paul specifically was studying over in Great Britain. and she happened to meet Emmeline Pankhurst who was the leader of the women’s social political union at that time. She was the founder of the women’s social and political union which was more of a militant suffrage organization. And Alice Paul was hooked. She saw a speech and started working with the group and was arrested three times while over in Great Britain and went on hunger strikes while there as well. several of the other key figures within the National Women’s Party were also jailed while over there. The British suffrage movement was sort of all about action now and it was very militant. There were rocks thrown through windows, there were protests in parliament, there were fires set throughout the city. I mean, it was a very, very violent movement—a woman died when she ran at the king’s horse. But it was certainly something that the United States saw as necessary to bring to the United States to kind of jump start the movement.”

“He definitely wasn’t an active supporter and wasn’t a vocal supporter at all. Ultimately he ended up turning his attention to suffrage and actively working to get it passed as a war measure in the later part of the teens. But his refusal to meet with the women in late 1916 was what sparked the picketing at the white house in 1917.”

Do you expect to (Belmont Paul Women’s Equality National Monument) be getting more material over the years?

“We do. We think there’s still a lot of material out there in private hands that people will want to donate to an institution like ours. In 1920, there’s a banner called the Ratification Banner and it’s filled with stars. For every state that ratified suffrage, they would sew a star on it. And so there’s a very iconic image of Alice Paul unfurling the banner on the day Tennessee became the 36th state to ratify. It’s a beautiful banner. Nobody knows what happened to it.”