HELSINKI (AP) — American rapper A$AP Rocky pleaded not guilty as he went on trial for assault Tuesday in Sweden, where he has spent nearly a month in jail and his legal troubles that started with a street fight caught the attention of U.S. President Donald Trump.

The Grammy-nominated artist, whose real name is Rakim Mayers, and two men thought to be members of his entourage are accused of beating a 19-year-old man in Stockholm on June 30.

Wearing sweatpants and a green T-shirt in court, Mayers, 30, pleaded not guilty to assault charges that carry a maximum penalty of two years in prison. He says he acted in self-defense during a street fight.

On the trial’s opening day, prosecutors and defense lawyers presented competing narratives of what happened.

Prosecutors showed CCTV footage and other video, including footage in which Mayers was seen throwing a young man to the ground.

They said 19-year-old Mustafa Jafari and a friend had gotten into an argument with the rapper and one of his bodyguards beforehand near a fast-foot restaurant.

Mayers also published videos on his Instagram account that showed him repeatedly pleading with Jafari and his friend to stop following him and his entourage. 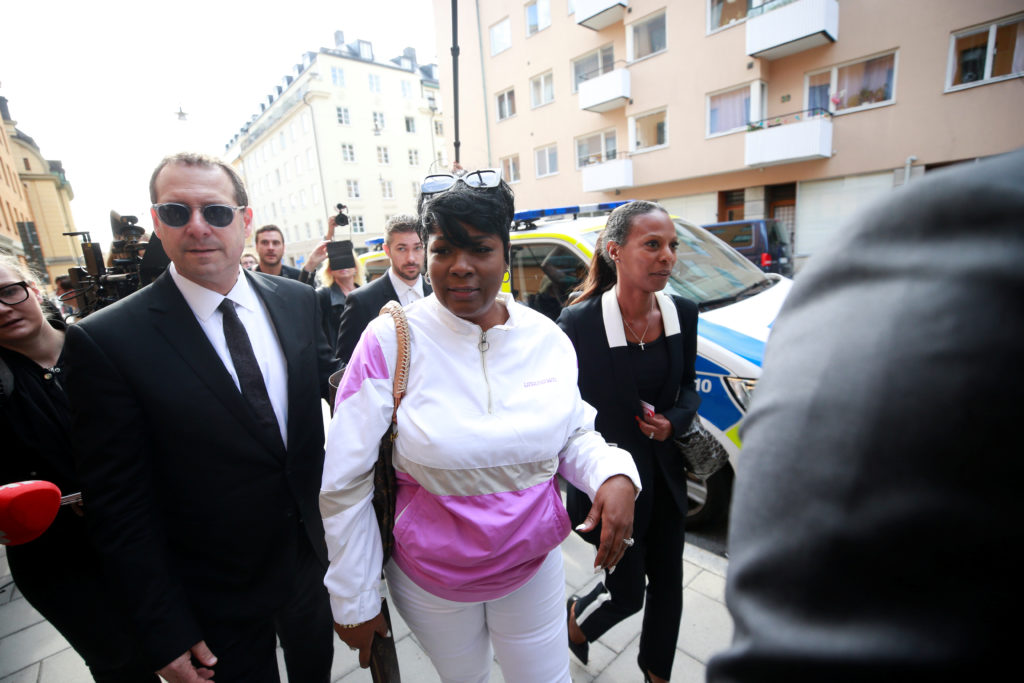 His mother, Renee Black, attended the proceedings. She has said she was convinced her son was not guilty

“This is a nightmare,” Black was quoted by Swedish media as saying when the trial broke for lunch.

Prosecutors alleged in court documents that the three suspects beat and kicked Jafari while he was on the ground and that he was hit with parts of or a whole bottle. The court file includes photos of Jafari’s cuts, bruises and blood-stained clothes.

A$AP Rocky’s lawyer, Martin Persson, told Swedish public broadcaster SVT on Monday that he would present the court with new evidence, including showing that “no bottle has been used to hit or injure anyone” and that any physical violence was “within the limits of the law.”

The well-known recording artist’s detention in Sweden prompted Trump to intervene on his behalf. The president vouched for Mayers not being a flight risk and offered to guarantee his bail, which Sweden does not have.

Trump urged Sweden on Twitter to “Treat Americans fairly!” and criticized Swedish Prime Minister Stefan Lofven “for being unable to act” to get Mayers released from jail.

“We do so much for Sweden but it doesn’t seem to work the other way around. Sweden should focus on its real crime problem! #FreeRocky,” he added.

The case has also drawn the attention of American celebrities like Kim Kardashian West and Mayers’ fellow recording artists, including Sean “Diddy” Combs and Justin Bieber, and created the movement #JusticeForRocky soon after the rapper’s arrest.

The trial was held in a secure courtroom “because of strong interest from the media and the public,” the Stockholm District Court said. Taking photographs and video was prohibited. The court set aside two more days for the trial. Witnesses are expected to testify Thursday.