How poetry helped these hurricane survivors weather the aftermath

A hurricane’s impact isn’t just measured by its damaging winds, the flooding and storm surges, or the cost of emergency resources. There are also deaths, families displaced by the destruction, loss of jobs and storefronts, and the months or years it takes for communities to recover, if ever.

After Hurricane Katrina, poetry was initially a form of therapy, said Asia Rainey, something she’s heard from other poets who were affected, as well. “Many of us wrote our trauma until it was numb,” she said, “and we wrote Katrina poem after Katrina poem.”

“We kept trying to find the way to say it,” she added, “It was trying to put your finger on something that really was intangible — and that was a feeling, that was a pain.”

For those who have lived through these disasters before, there’s a familiar pang of anticipation for the next powerful storm, a theme felt acutely by poets who gathered last week to mark the 15th anniversary of Katrina’s landfall. Organized by the nonprofit organization Poets & Writers, the virtual event was held last week as Hurricane Laura approached Louisiana and Texas.

The works featured at the event touched on how loss is felt in many different ways, including culture and ways of existence, along with how people were able to carry on. And, this being a Katrina remembrance, there were also acknowledgements of how the government failed New Orleans residents, namely its Black families, during and after the storm.

“We live outside,” writer Mona Lisa Saloy told the PBS NewsHour about New Orleans. “We talk to our neighbors. We pass the potato salad across the fence. And if somebody’s having a wedding or a party, everybody’s invited.” After Katrina hit, you didn’t hear the casual chit-chat of your neighbors, you didn’t hear a kid coming down the street playing the trumpet. It was that warm and sharing atmosphere that was immediately silenced, she added.

With the pandemic adding an extra layer of complication for storm response this year, it was not difficult for the writers to draw parallels between the ways the U.S. government is failing to protect Black and Latino communities from coronavirus with the systemic failures that occurred during Katrina and the aftermath. 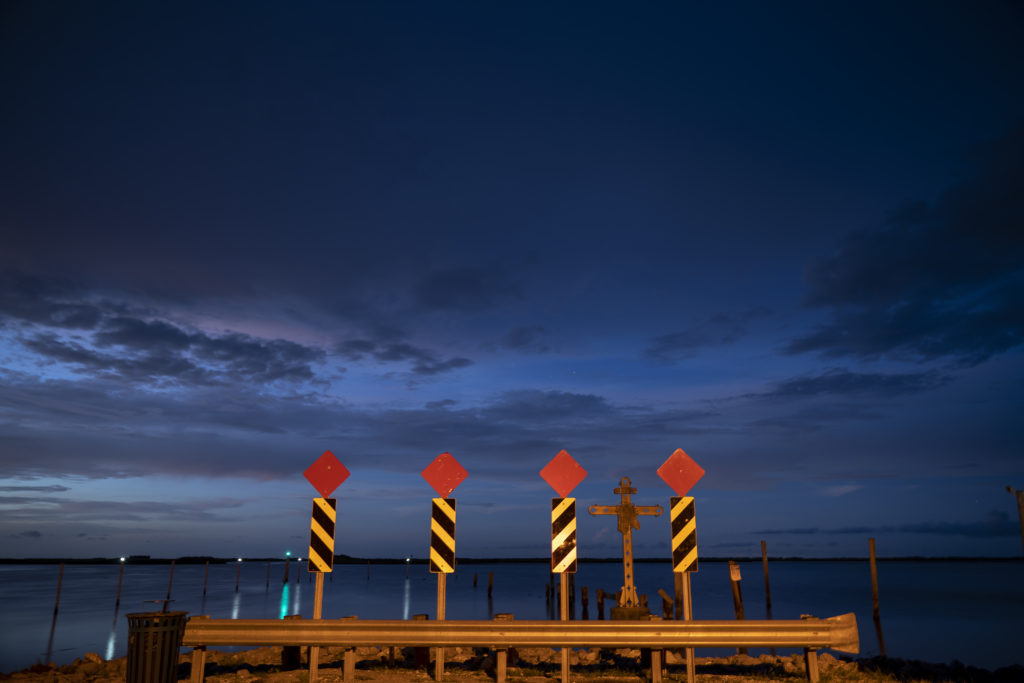 A memorial cross for the victims of Hurricane Katrina stands in the water near the bank of the Mississippi River-Gulf Outlet in Shell Beach, Louisiana. Photo by Drew Angerer/Getty Images

Rainey’s poems are a recollection of hearing hundreds and hundreds of stories from people, from friends, from her family on how Katrina affected them, she said. “A lot of the work I did after Katrina was because I felt like I got out when a lot of people did not,” she said.

When it became clear Hurricane Katrina was going to make its second landfall on southeast Louisiana 15 years ago, one of the things Rainey brought with her as she evacuated the city was her poetry.

Once a mandatory evacuation notice was issued, Rainey said she hurriedly packed “maybe one and a half suitcases,” space largely reserved for about 20 notebooks of works-in-progress and thoughts accumulated over several years.

That wasn’t the original plan. Residents along the Gulf Coast don’t always flee inland when a big storm approaches. And not everyone has the option to evacuate. It costs money and, simply, some don’t have a good way to leave. There’s a routine to riding out a storm: gather emergency supplies, protect critical documents, prepare a “go-bag” of essentials — just in case — among other considerations.

Rainey had planned on hunkering down during the storm. She gathered her candles, canned goods and other supplies, thinking — at worse — she’d weather the aftermath inside her second-story apartment, maybe without lights for a few days. She was prepared to barbecue on her balcony, if she needed to.

But Rainey, who was coming up through New Orlean’s poetry scene at the time, said “being an artist saved my life literally.”

A friend of hers was doing a show at Tipitina’s, one of the city’s most revered jazz clubs. When Rainey arrived, she said the club looked “odd because it’s never empty.” Joining her friend at the bar, minutes later, they heard a weatherman warning viewers about the mandatory evacuation notice.

“I did not own a television,” Rainey said. “I wouldn’t have gotten this news had I not been there.”

As with many other hurricane survivors, Rainey lost documents, family photos and other items that defined who she was — except for those notebooks. Today, they sit in a milk crate that rests at Rainey’s feet when she’s at her desk. Rainey now lives outside Atlanta and the notebooks are among the few of her belongings left over from that time. 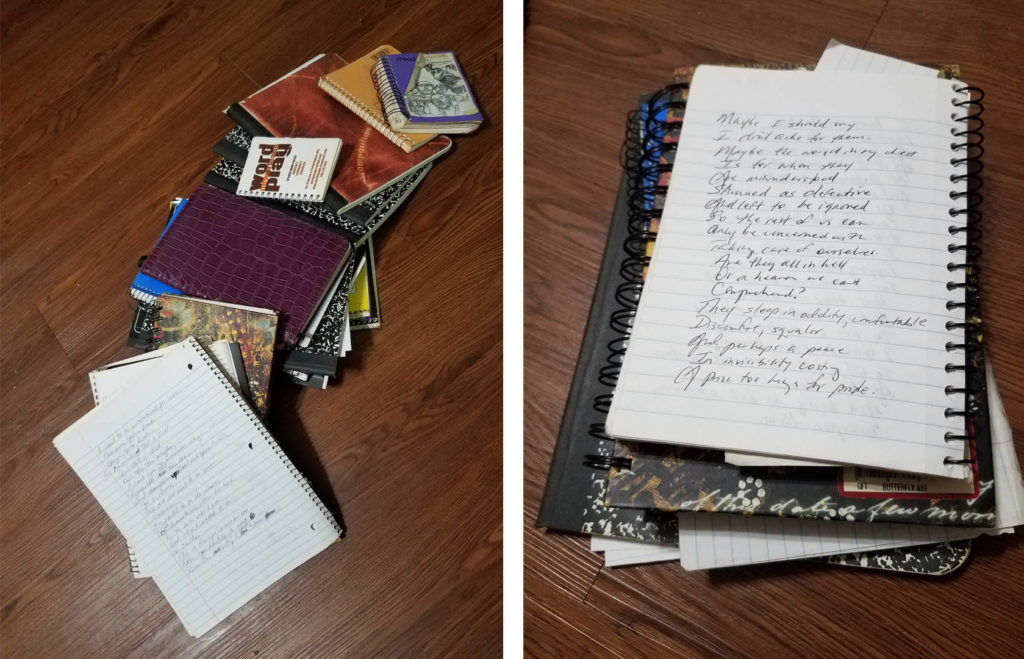 Every time hurricane season rolls around, Rainey said she’s reminded of her grandmother who taught her to be a survivor. “The people of New Orleans — the kind of spirit we have in New Orleans — it’s something that’s in the blood, in the dirt. It’s something we’re raised with.”

Rainey said her poem “Mary” was a “snapshot” of her grandmother. Before there were designated evacuation routes, her grandmother sheltered through Hurricane Betsy in 1965.

“She just had some plywood, some nails and then a hammer to put it all back together when it was done,” Rainey said at the reading.

Hurricane Laura, which hit Louisiana the hardest last week, arrived at a time of other painful anniversaries.

Three years ago, Hurricane Harvey’s rains flooded thousands of homes in and around Houston. It ranks as the one of the most costly storms to hit the U.S, second only to Katrina. Katrina is considered a historic storm on several fronts. Its storm surge reached a recorded 30 feet along the Mississippi coast, exceeding a decades-old record from 1969’s Hurricane Camille, whose peak storm surge hit 24 feet. Katrina claimed more than 1,800 lives and caused about $160 billion worth of damage. But after the storm left, the levees then broke, flooding an estimated 80 percent of the city.

Saloy calls Katrina a “federal flood.” In a 2014 poem that she revised for the virtual reading, Saloy states plainly: “It wasn’t Katrina you see / It was the levees.”

The Army Corps of Engineers has acknowledged its own shortcomings in noticing flaws in the city’s flood protection system. But the recovery from the breached levees and flooding that overwhelmed New Orleans has been unequal.

“Oh say, can you see us America? Is our bright burning disappointment visible years later?” Saloy wrote in a previous draft of her poem.

Saloy evacuated with a friend, her dog Jazz, and an elderly neighbor, a day before Katrina hit the city. After a couple of weeks, she was able to return the city, when most people were still not allowed back.

“It was devastating,” Saloy. “It was so dead and brown. This is a lush, semi-tropical place, so to see no grass green, to see so many trees down.”

“No one could have prepared me for that,” she added.

Her neighborhood got more than 9 feet of water. After the waters receded, Saloy found her home soaked, funky from the wetness and full of mold. Saloy also lost a bunch of research materials, along with family photos and mementos like small African sculptures. Saloy also said that that sense of displacement was also felt in the disruptions to the pulse normally felt in the city.

When putting Katrina into poetry, Saloy said she didn’t want to document what was lost, but “embrace what made us so special,” adding that anyone who went to other places after the storm became New Orleans cultural ambassadors.

“Wherever they went, the food was better. The friendliness was encouraged. The music was there. We bring our celebration of life with us,” she said.

An overarching goal for Saloy was capturing that essence in her poems. “Poetry is human history. Poetry is, yes, intellectual. Yes, a report. But it is imaginative. It is more than what’s real. It’s reality and reality multiplied and felt so deeply,” she said.

“We’re not just authors. We are the carriers of our culture.”

Revised from a 2014 poem in “Second Line Home.”
By MONA LISA SALOY

Generations paid for a 17-foot levee but
We got 10-foot levees, so
Who got all that money—the hundreds of thousands
Earmarked for the people’s protection?

No metaphors capture that battle for New Orleans
Momentarily defeated and scorned by the bitter mistress of Bush-era non-government
New Orleans was then broken by the bullet of ignorance
Our streets still baptized by brutal neglect
Our homes standing, now return with brown and white faces, segregated by
Broken promises of help where hurt lingers but does not win
Our hearts like our voices rise now in the aftermath

Our eyes were scattered among T.V. images of
So many poor, who without cars clung to interstate ramps like buoys
young mothers starving stole diapers and bottles of baby food
Our families spread as ashes to the wind after cremation
Our brothers our sisters our aunts our uncles our mothers our fathers lost
Stranded like slaves in the Middle Passages
Pressed like sardines, in the Super Dome, cargo like on slave ships
Where there was no escape from feces
Some died on sidewalks waiting for help
Some raped in the Dome waiting for water and food
Some kids kidnapped like candy bars on unwatched shelves
Some beaten by shock and anger
Some homeless made helpless and hopeless by it all

We worked hard, paid taxes, voted our leaders into office!
What happened to life, liberty, and the pursuit of the good?
Oh say, did see us America?

Grandmother said they wondered
why
She didn’t have no man, now
Said she had a man til he raised
his fists
Said when her brothers raised
theirs, grandfather
Wasn’t ever coming back in
Said her shotgun stayed stocked
with shells
Said love ain’t supposed to make
you
Lose yourself in a shadow
Said you better stay in the sun

READ MORE: Why poems can be safe spaces during the pandemic