NEW YORK (AP) — When she sings, Ali Stroker says, she has “no limitations.”

That was clear on Sunday as Stroker performed and made history as the first actor in a wheelchair to capture a Tony Award. She earned the trophy for her portrayal of Ado Annie in Daniel Fish’s dark revisionist revival of the Rodgers and Hammerstein classic “Oklahoma!”

“This award is for every kid who is watching tonight who has a disability, who has a limitation or a challenge, who has been waiting to see themselves represented in this arena,” Stroker, who won for best featured actress in a musical, said on stage. “You are.”

Singing is where I have no limitations.

Dressed in a neon yellow off-shoulder gown designed by her friend, Rachel Antonoff, Stroker told The Associated Press on the red carpet before the ceremony that her “Oklahoma!” part is “just a dream come true,” adding: “I’ve been singing since I was 7 years old and for me singing is where I have no limitations. It is where I feel most powerful, and my voice and the ability to create music has, I think, really brought me out of all of the hardship that I’ve been through, and it’s brought me here today into my most powerful self.”

She noted one in five Americans lives with a disability. 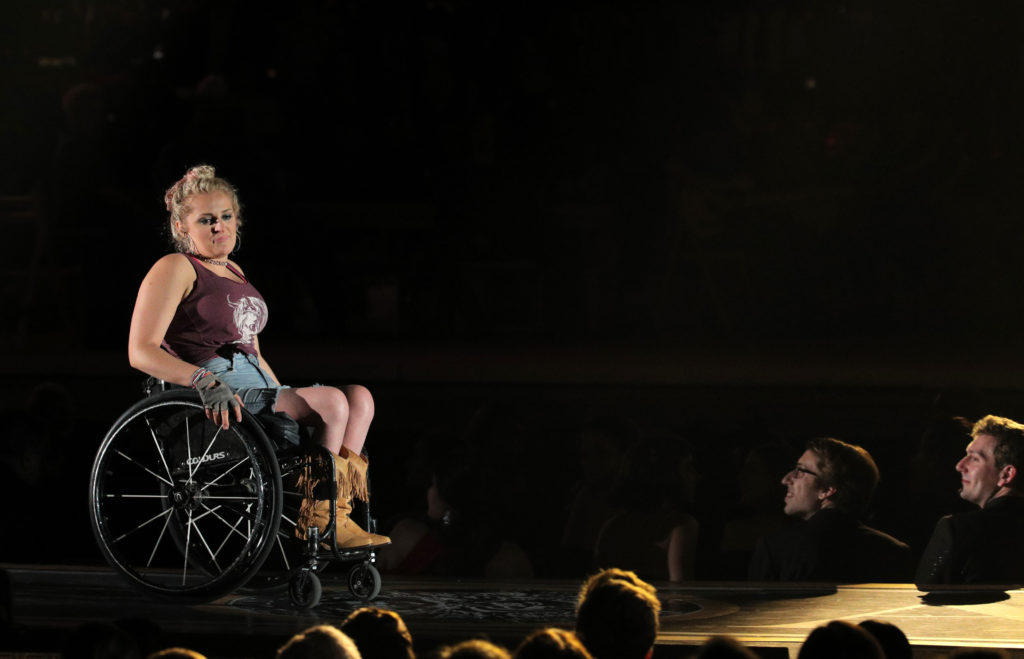 Ali Stroker performs a song from Rodgers and Hammerstein’s “Oklahoma” during the 73rd Annual Tony Awards. Photo by Brendan McDermid/Reuters

The 31-year-old Stroker, who was the first person in a wheelchair to appear on Broadway back in 2015 in “Spring Awakening,” was paralyzed from the chest down due to a car crash when she was 2.

The “Oklahoma!” producer Eva Price told the AP on Sunday that Stroker is the perfect Ado Annie.

“It was clear from her humor, her heart, who she is, the way she spoke these lyrics and those lines about what it means to be a strong woman who knows what she wants and can’t say no,” Price said.

Left: Ali Stroker accepts the Featured Actress in a Musical award for "Rodgers and Hammerstein's Oklahoma!" Photo by Brendan McDermid/Reuters