Graffiti artists come out to ‘spray for Paris’ after attacks

Three weeks after terrorists attacked their city, Parisians are speaking loud and clear — through street art.

The street art of Paris, post-attacks, ranges from notes urging peace to “Spray for Paris,” a play on “Pray for Paris” which calls on artists to help the city heal. Its presence is especially strong in Belleville, the northeastern neighborhood straddling four arrondissements where I lived briefly in 2012, and where I found myself last week on a visit to my sister.

The neighborhood is elevated over the rest of Paris, and if you look down its central thoroughfare, Rue de Belleville — past Tunisian cafes and a Chinatown district — it is possible to glimpse the base of Canal St.-Martin in the 10th arrondissement, where nearly three weeks ago 15 people were killed in a series of attacks on restaurants in the area. The kind of place that travel writers describe as “off the beaten path,” it has been home to a significant North African immigrant community since the 1920s and hosts a notably activist artistic scene.

The graffiti and street art of the area are often explicitly political — many sprayed messages call for “égalité” and “liberté” in protest of the French systems that so often disenfranchise people of color, low-income people and immigrants. Now, nearly a month after what has been called the worst European terrorist attack since the Madrid bombings in 2004, French graffiti artists have taken to the streets once more, and it is there that I looked for understanding of how the city is moving forward. 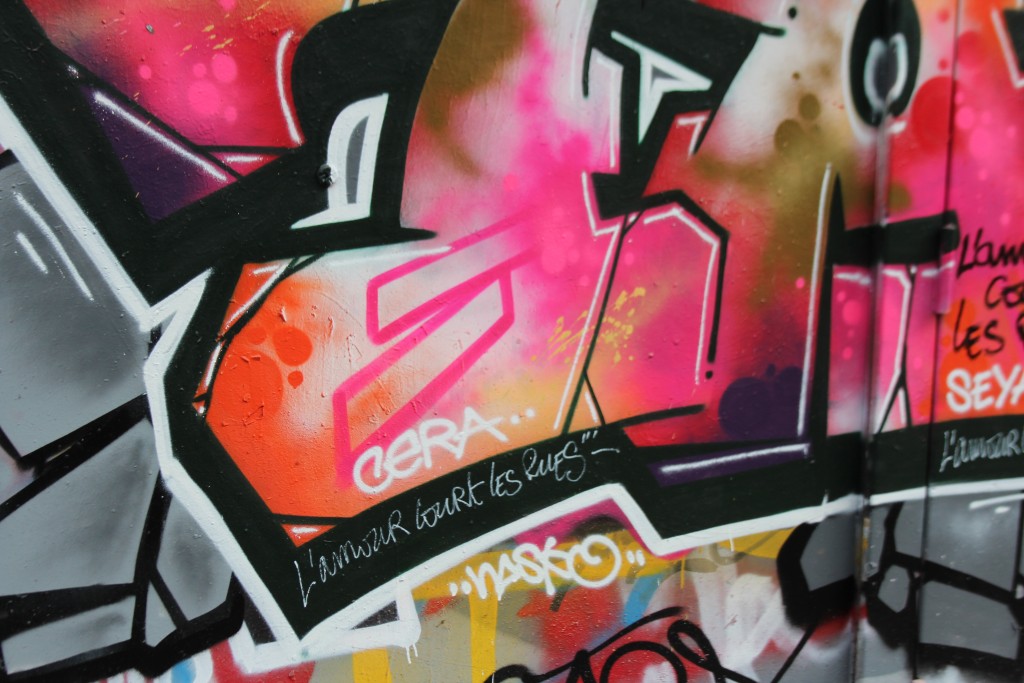 Graffiti on Rue Dénoyez shows the saying “L’amour court les rues,” or “Love runs in the streets,” on Nov. 28, 2015. The phrase has been popular among Paris graffiti artists for years, and some artists have used it at memorials for the victims of the attacks that occurred on Nov. 13, 2015. Photo by Corinne Segal

Street art in Paris has long been directly tied to public issues and politics. Gérard Zlotykamien, an early pioneer of Parisian street art, scrawled loose outlines of people on the street in the 1960s, drawings meant to evoke the shadowy forms that people’s bodies left behind at the site of the atomic bomb in Hiroshima in 1945. Parisian street art received a boost during the 1968 student demonstrations in Paris, when it served as a new canvas for public protest. Several years later, Ernest Pignon-Ernest was one of the earliest artists to use postering as a means to distribute art in the streets in the early 1970s.

In 1981, graffiti reached a new level of popularity with the stenciling styles of Blek le Rat, a street artist who painted rats — which he called “the only free animal in the city” — throughout Paris and who Banksy cites as inspiration. By creating street art in defiance of laws that prohibited it, these artists raised questions about the politics of public space and brought forth a new movement of explicitly public self-expression.

Today, they continue to do so. Here’s what else I found there. 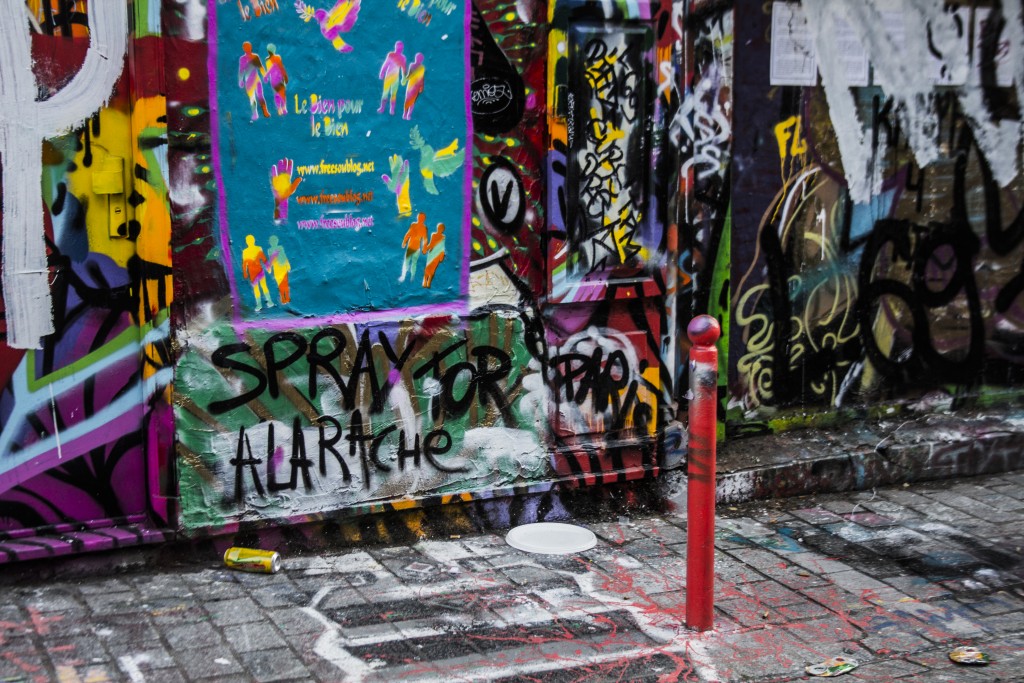 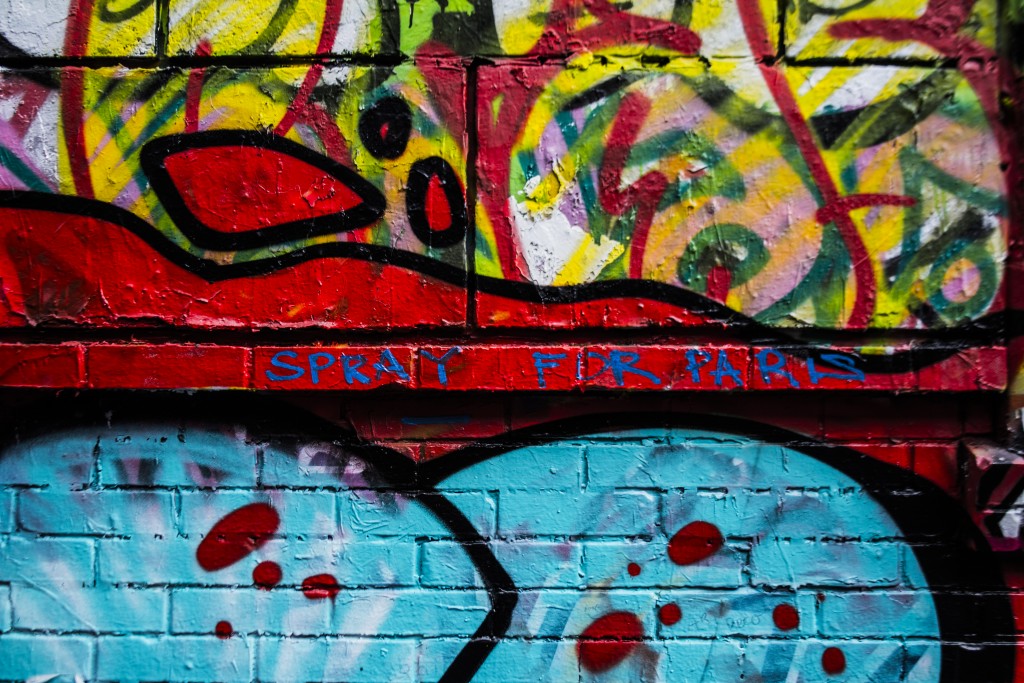 Paris’ Rue Dénoyez shows the phrase “Spray for Paris” on Nov. 25, 2015. Parisian graffiti artists wrote “Spray for Paris” in a number of locations throughout the city after the Nov. 13, 2015, attacks that killed 130 people. Photo by Corinne Segal 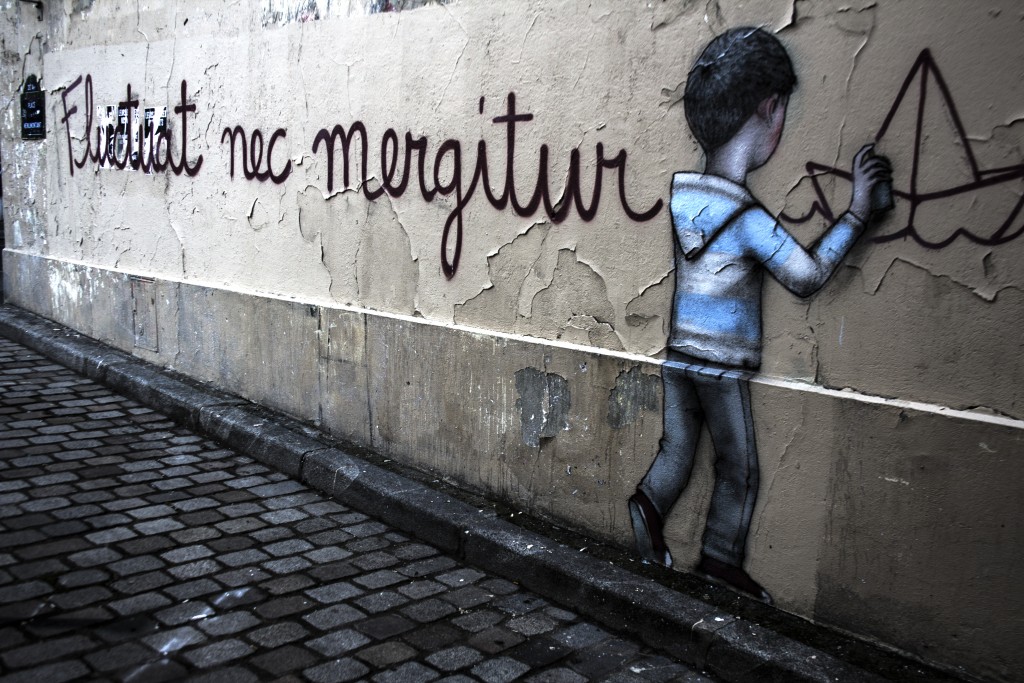 The saying “Fluctuat nec mergitur,” meaning “Tossed but not sunk,” appears at the Place de Ménilmontant on Nov. 28, 2015. The Latin phrase is the motto of the city of Paris and has popped up around the city in the weeks following the attacks. Photo by Corinne Segal 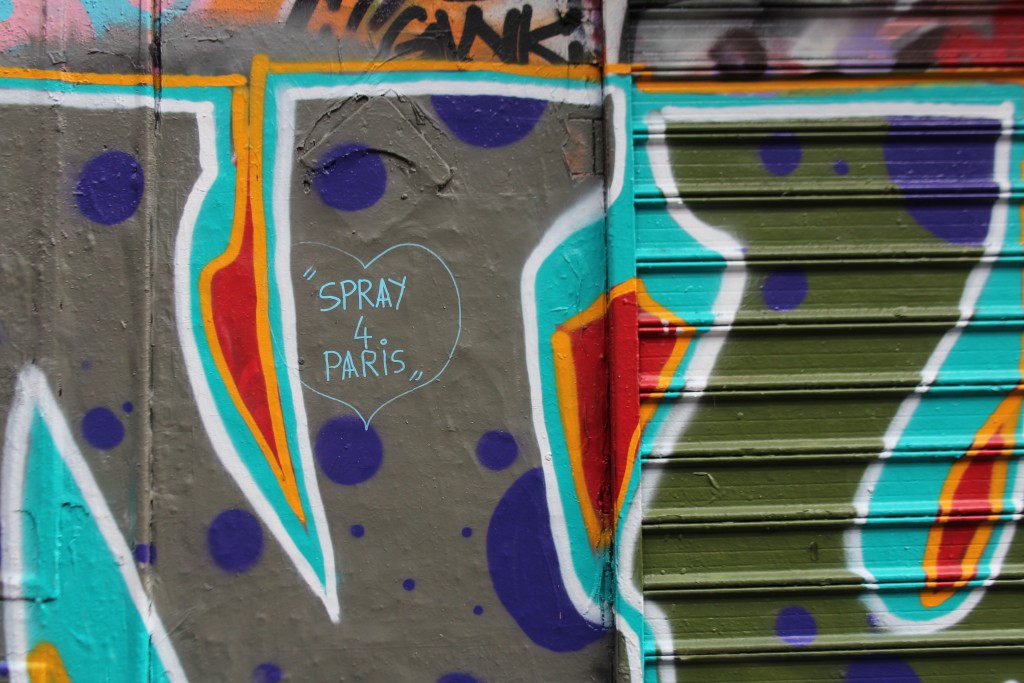 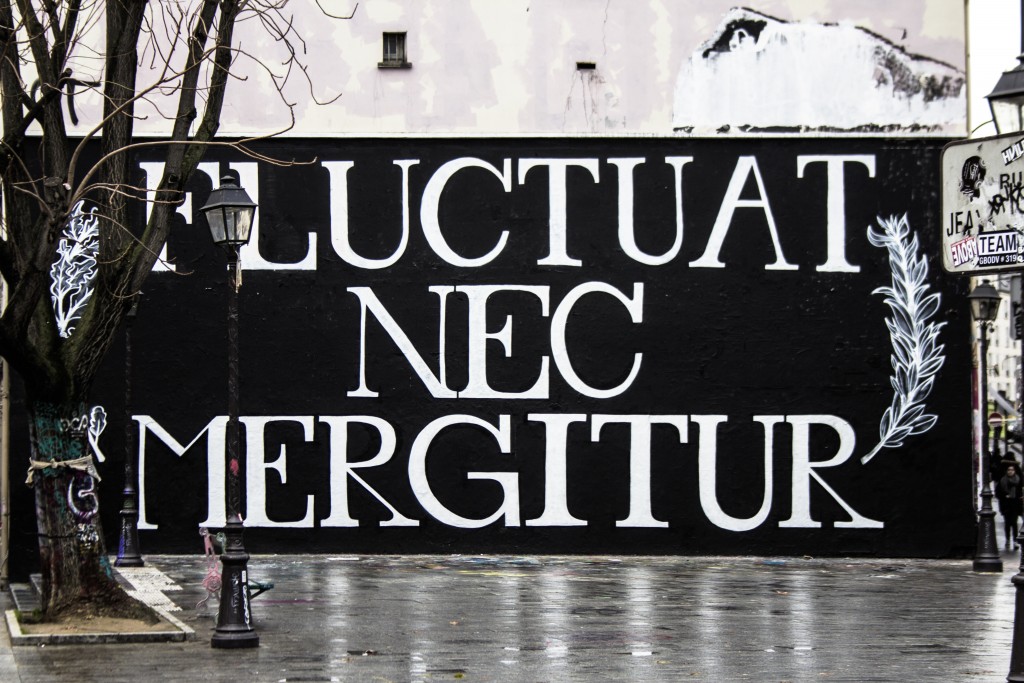 Paris’ city motto, “Fluctuat nec mergitur” (“Tossed but not sunk”), appears Nov. 25, 2015 at a plaza at the intersection of Quai de Valmy and Rue Jean Poulmarch in the 10th arrondissement. The plaza is a five-minute walk across Canal St.-Martin to Le Petit Cambodge, the restaurant from which some of the first reports emerged of gunmen on Nov. 13, 2015. Photo by Corinne Segal 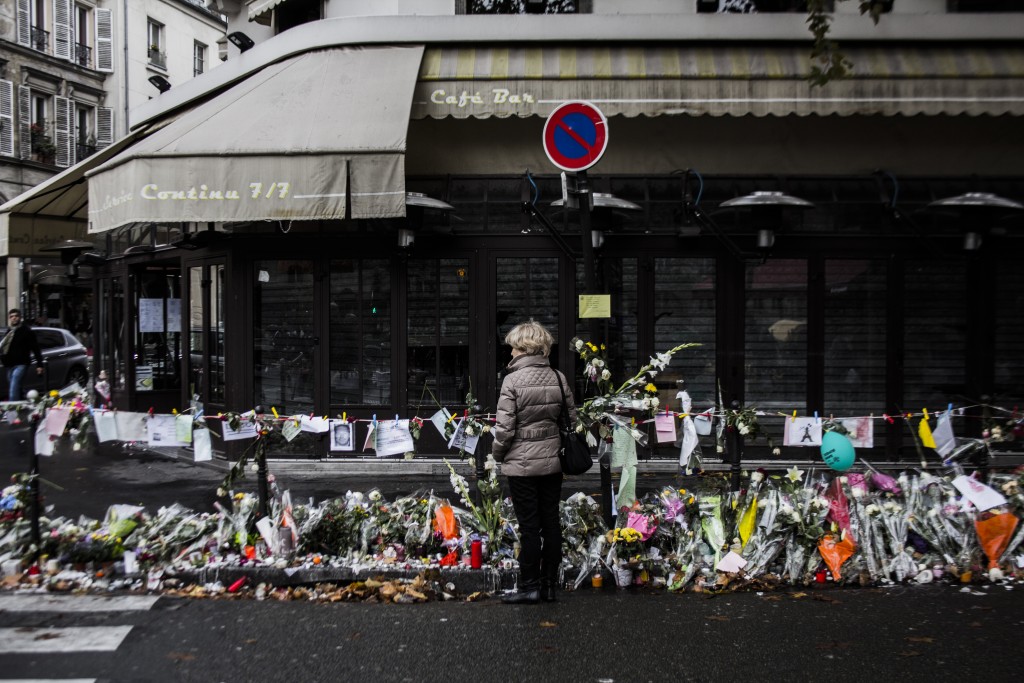 A woman stands next to tributes outside the restaurant Café Bonne Bière on Nov. 25, 2015, where people left flowers, candles, notes and drawings. Photo by Corinne Segal 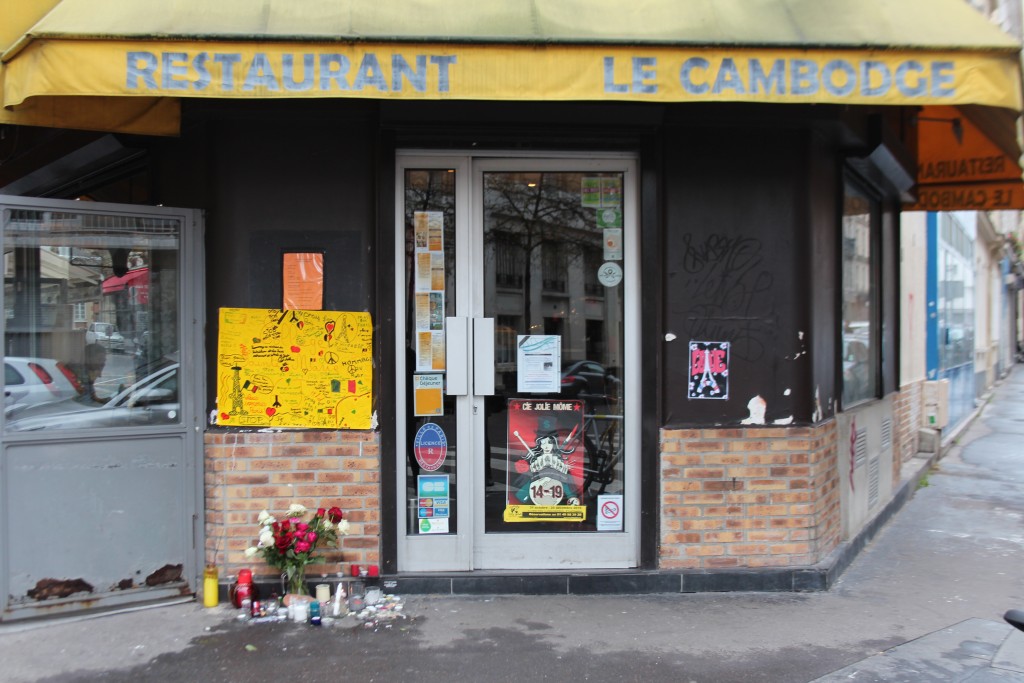 A poster with drawings and messages appears next to a small tribute outside Le Cambodge, the sister restaurant to Le Petit Cambodge, on Nov. 25, 2015. Photo by Corinne Segal 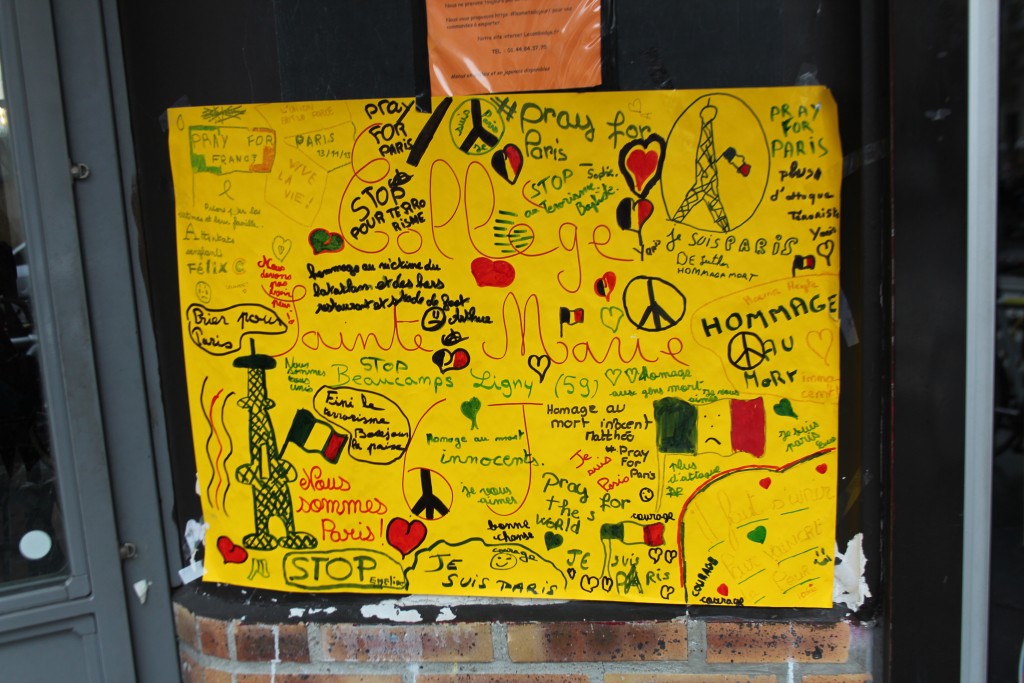 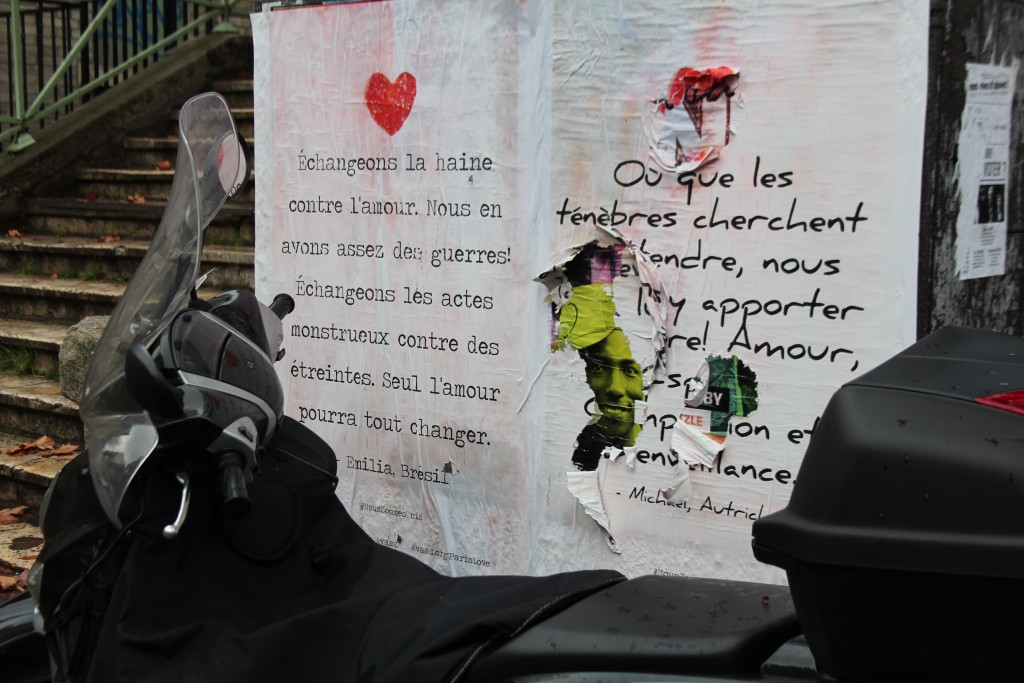 A poster from Avaaz, a civic organization, reads “”Seul l’amour pourra tout changer” (“Only love will change everything”) on the Quai de Valmy, near the site of the attacks at Le Petit Cambodge and Le Carillon, on Nov. 25, 2015. Photo by Corinne Segal

Left: Rue Dénoyez in Paris' Belleville neighborhood is one of the few places in Paris where graffiti is legal. The several-blocks-long street is covered in graffiti and other street art and is constantly being updated. Photo taken Nov. 28, 2015. Photo by Corinne Segal