For two months last year, anyone who passed by Washington D.C.’s RFK Stadium, less than two miles from Capitol Hill, was faced with a sea of small white flags.

Before it was dismantled in November, the work totaled 250,000 white flags sprawled over several large fields, in neat rows. Each flag represented a single person who had died of the virus in the United States at the time. Visitors were able to personalize and plant their own flags to commemorate the dead.

Titled “IN AMERICA How Could This Happen …,” the public art installation was created by Maryland artist Suzanne Brennan Firstenberg, who told the PBS NewsHour that it was partly a protest against how the federal government had handled the COVID-19 pandemic. 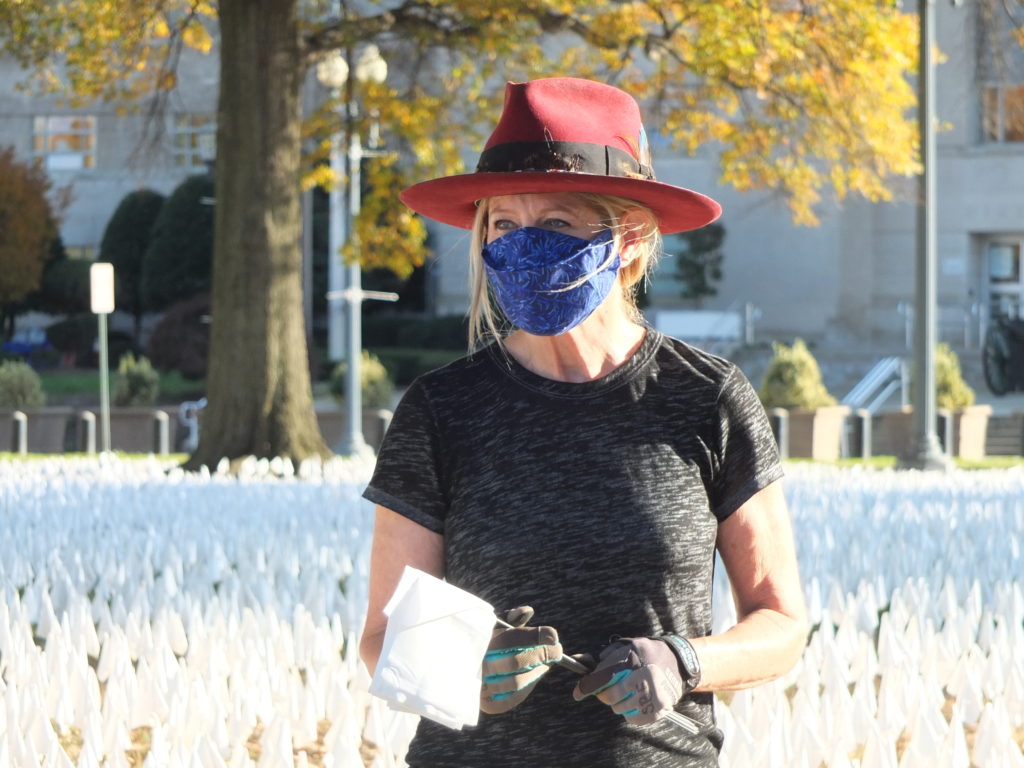 Multiple exhibitions in the nation’s capital had sought to capture the scale of the pandemic: the COVID Memorial Project installed 20,000 U.S. flags on the national mall in September and the advocacy group “COVID Survivors for Change” placed 20,000 empty black chairs on the White House Ellipse in October.

But Firstenberg said it was critical for her to visually represent each life lost. “I had to make a statement about individual lives, that each person mattered to us,” she said.

Firstenberg said she chose white flags for the color’s double meaning. Viewed individually, each flag symbolized the innocence of those lost. When taken as a whole, the piece was meant to resemble a large flag of surrender.

“At times it felt like that’s what we had done, giving in to this pandemic,” Firstenberg said.

The PBS NewsHour’s Jeffrey Brown spoke with Firstenberg, via Skype, about the installation, how to pay tribute in the midst of a crisis, and her plans to digitalize the artwork and give it a new, virtual life.

Tell me, what was the purpose of the project?

I was after a couple of things. First of all, I had to — as a visual artist — make sense of the number. When the COVID death toll got so big that people began to dismiss it, I knew I had to step in and do something. I had to visualize it materially so people could better understand what was happening. I’ve been a hospice volunteer for 25 years. I know that every single one of those lives lost was precious to someone, mattered, was important. So I had to make some kind of statement that said each life has to be valued.

In a sense you’re capturing both the individual and the scale.

Absolutely, and what a great way to put it. That was why personalized flags were so critical in this art installation. I had people come and write the names of loved ones and messages to loved ones on individual flags. So visitors, especially those who hadn’t lost someone, when they looked down and saw a flag with a name on it, imagined the concentric circles of grief that that flag represented, and then they would lift their gaze and see this immense field of white flags — that brought it home to visitors. 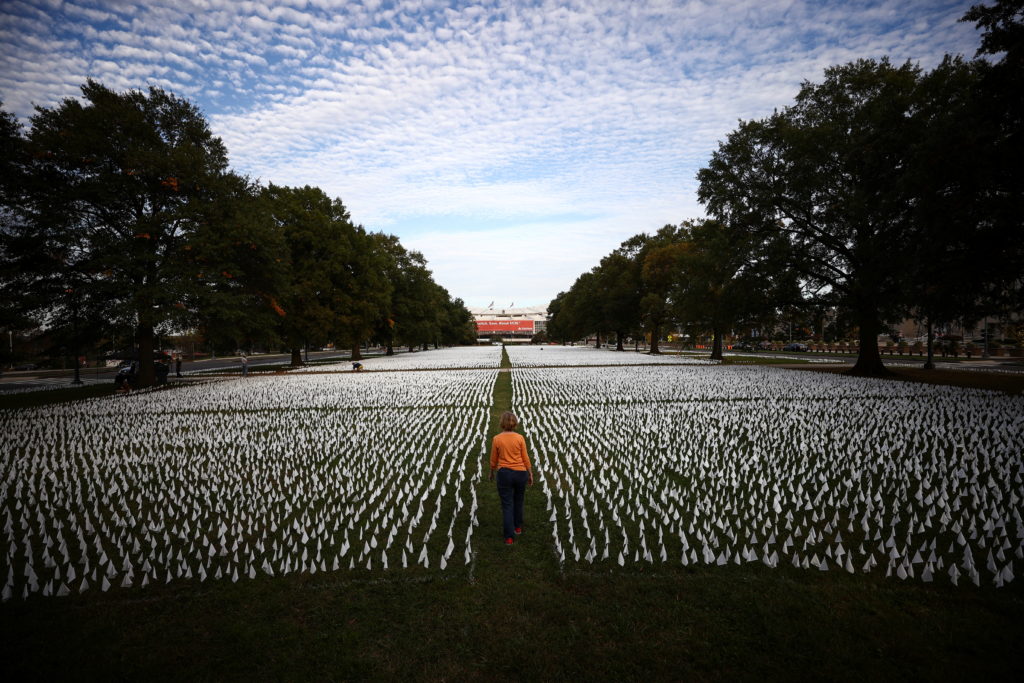 A person walks past Firstenberg’s art installation in D.C. Photo by Hannah McKay/Reuters

You mentioned working, volunteering as a hospice worker. That’s one-on-one grief for the most part, and this is a kind of mass grief. How do you put those two experiences together?

One of the ways I managed that was by being at the art installation every day, rain or shine. I was there from mid to late morning, until sunset, because I wanted to personally be there and meet people who were bringing their grief. It’s one thing to have a name on a flag, it’s another to show someone that name. And I wanted to be there for as many people as I could. Also in this pandemic, hospice volunteers have not been allowed to see patients. It allowed me to take that love and respect I have for individuals and really create on a mass scale.

You’re finding ways now to give it a new life virtually.

I am. One of the things that dawned on me towards the end of the installation was that I had an obligation to continue to give people an opportunity to honor those loved ones who they continued to lose during this pandemic. So I have worked with the terrific folks at [George Washington University’s] Anthropology Department, and we are creating a digitized version. That way people can go online and see a recreation of this art installation. They can find flags that were already planted and then they can plant flags themselves virtually.

We are one in our grief.

If there’s one thing that’s good about a digitized version, and that is that it gives access to so many more people. The bad part is the loss of the public acknowledgement that was so, so moving when people would visit the art, bringing their grief and they would see other people at the art also experiencing grief. We are one in our grief. And that’s what visitors really felt viscerally when they saw others viewing the flags that I can’t recreate. But I can give people a chance to publicly acknowledge their loss in the loss of others.

How do we memorialize victims of the coronavirus so that we also don’t lose sight of the enormous human toll? How do we think about the individuals while also keeping in mind the larger toll?

Now is the time to not lose sight of the value of the individual. And so I really think that a memorial to all those we’ve lost from COVID does need to have that individual nature. It does have to have space for the individual, while also honoring the scope. People called this a memorial, and I’m kind of hesitant to do that because you don’t memorialize a plane crash in the middle of it crashing, and the plane is still crashing here. So I hesitate to even use the word “memorial” right now. But in time, I think we will find a magnificent way to honor all of our losses and to allow this to be a real pivot point in who we are as a country.

READ MORE: How communities across the country are honoring COVID victims

Left: When visualizing the scope of the mass loss to the coronavirus pandemic, Maryland artist Suzanne Brennan Firstenberg said to "not lose sight of the value of the individual." Video by Maea Lenei Buhre and Frank Carlson/PBS NewsHour

Maea Lenei Buhre is an associate producer for the PBS NewsHour.