A boy freezes as a TV reporter delivers the news that someone important to him has died. Wearing his “Black Panther” costume, the boy drops his action figure of King T’Challa.

“Daddy! Daddy! My h-hero is gone!” he cries in his father’s arms.

The boy is the center of a comic by artist Courtney Lovett, who at first didn’t believe the news that actor Chadwick Boseman had died. After seeing the late-night alerts on social media, she went to bed thinking it could have been a dream. But the next morning, the headlines hadn’t budged. Lovett said she doesn’t normally get emotional after a celebrity’s death. But this was no normal year.

The overlapping crises of 2020 have been acutely felt by Black people in the U.S. The novel coronavirus has worsened pre-existing disparities, both in health and financial security, and claimed a disproportionate number of Black lives. Police violence against Black people has not let up, touching off outpourings of anguish and months of nationwide protests.

“Every Black person I know is exhausted just from life right now.”

Since COVID-19 began infecting and killing Americans, our rituals for grieving have changed. Not everyone can attend funerals of loved ones. Time spent reminiscing and honoring the dead has to be spent farther apart or over video chat. The process of grieving itself can be more isolating now. At risk of understatement, Boseman’s death was shocking — the reactions on social media were swift in their immediate disbelief and despair. The official statement from the actor’s family revealed that he had been living with a colon cancer diagnosis for the past four years. The actor who had spent his career embodying towering Black figures in history — Jackie Robinson, James Brown, Thurgood Marshall — hadn’t been vocal about his diagnosis.

“It’s a lot to take on at one time,” said Monnica Williams, a clinical psychologist and associate professor at University of Ottawa’s School of Psychology.

“Every Black person I know is exhausted just from life right now,” she said.

Lovett, heartbroken, began to see the pictures posted by parents of children memorializing Boseman — a figure who had embodied Black lives in America and Africa. There were many Wakanda salutes, many makeshift memorials for Black Panther with superhero toys paying their respects.

With those images in mind, Lovett created a 10-panel comic that not only paid tribute to the 43-year-old actor, whose work and storytelling she admired, but to also leave a message of hope for the children who looked up to Boseman or his most famous character, King T’Challa, as an idol.

In Lovett’s comic, a black panther appears to the boy, who’s in bed grieving. The panther comforts the boy and then leads him to Boseman who delivers a message from the afterlife: The child, too, is a king.

Lovett said she wanted to end her comic by telling children that, “You are so great. You can still do these things, even though you feel that your hero is gone, we still have heroes here. You are a hero.”

To watch Boseman’s work is to see an actor respect history and the people who made it. In his 2018 commencement speech at Howard University — his alma mater — Boseman spoke of how time seemed to slow down when he briefly encountered Muhammad Ali on campus years ago. Ali, one of Boseman’s personal heroes whose poster was on his wall growing up, was walking by when the champion jokingly challenged the college student. Ali raised his fists, Boseman recalled, and said he was willing to play along, “to act as if I was a worthy opponent.”

“What an honor to be challenged by the GOAT — the greatest of all time — for a brief moment,” Boseman said of Ali. “His movements were flashes of a past greater than I could imagine.”

Years later, Boseman would leave his own thumbprint on American culture with his portrayal of T’Challa. When the king of Wakanda, a fictional, Afrofuturistic country, brandished his vibranium claws on screen four years ago, the rest was history. “Black Panther” became a box office smash and the only Marvel superhero film to receive a best picture Oscar nomination.

But those accolades don’t compare to how the film’s many fans responded brightly to its Black hero — or the scores of other strong, nuanced Black characters — that pushed back against Hollywood’s historical lack of imagination on how to tell and support Black stories.

Jasmine Pearson said in an email that Boseman was a superhero to her two children. Her son Kaleb, 4, was watching another movie with T’Challa, “Avengers: Endgame” — a nightly routine — when she first heard news of the actor’s death. When she told her son about Boseman, she said her son responded, “He’s not dead, Mama, he’s still helping save the world.”

Pearson’s son and daughter, Khloe, 5, also held a pretend funeral for Boseman. Captain Marvel, the Hulk and several different versions of Spider-Man were among the plastic attendees who paid their respects. 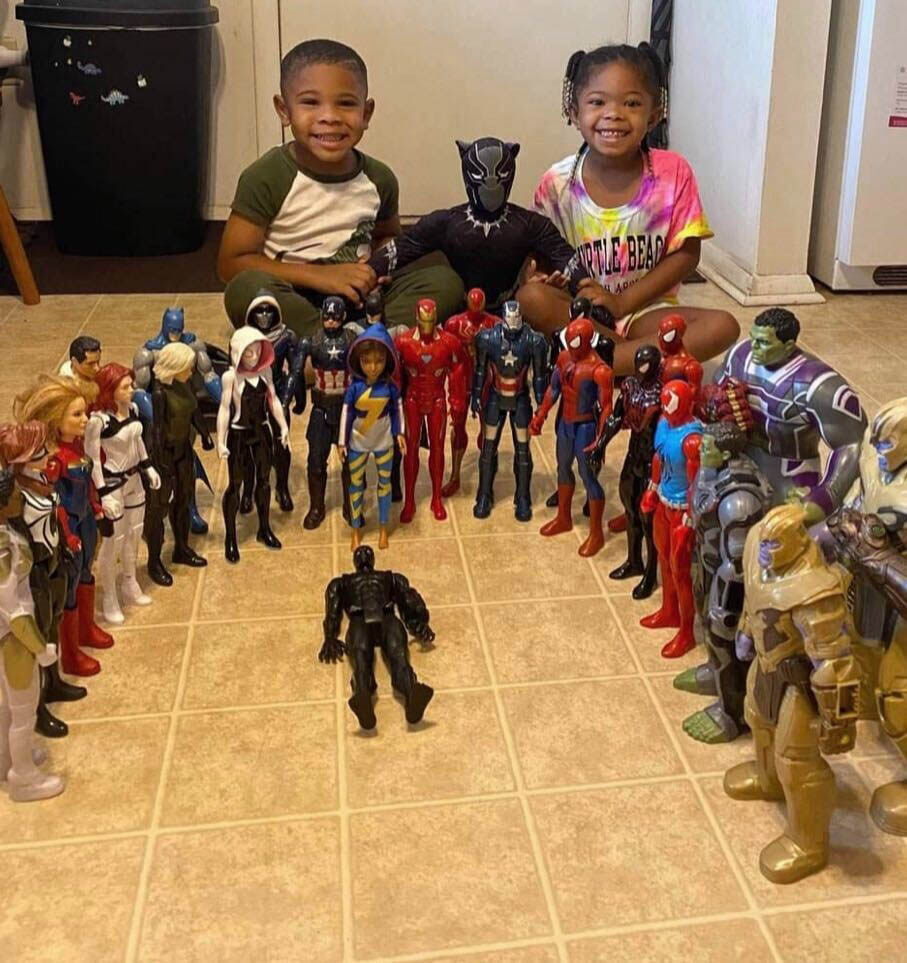 Pearson also drove about an hour with her kids to Anderson, South Carolina, for the community memorial service held last week in honor of Boseman, the city’s hometown hero. Kaleb wore his Black Panther mask and Khloe clutched her Black Panther plush toy. Thursday’s tribute ended with a social-distanced screening of “Black Panther.” (Boseman’s family has said that the actor will be laid to rest in a private funeral service in Anderson.)

Deanna Brown-Thomas, James Brown’s daughter, told the crowd that Boseman was the “epitome of Black excellence,” adding that she loved that he “wasn’t Hollywood.”

“He was just Chadwick, from Anderson, South Carolina. I looked at him as a younger brother though he played my father” in the biopic “Get On Up,” Brown-Thomas said.

Boseman took on roles that “embodied the true essence of who we are as African Americans,” Pearson wrote in an email. And, she said, it was important that Boseman portrayed a superhero who shared the same skin color as her children.

At the memorial, Pearson took pictures of her kids standing in front of black-and-white artwork by local artist Nat Morris, who showed Boseman in the various roles from “Get on Up,” “42” and “Marshall.” 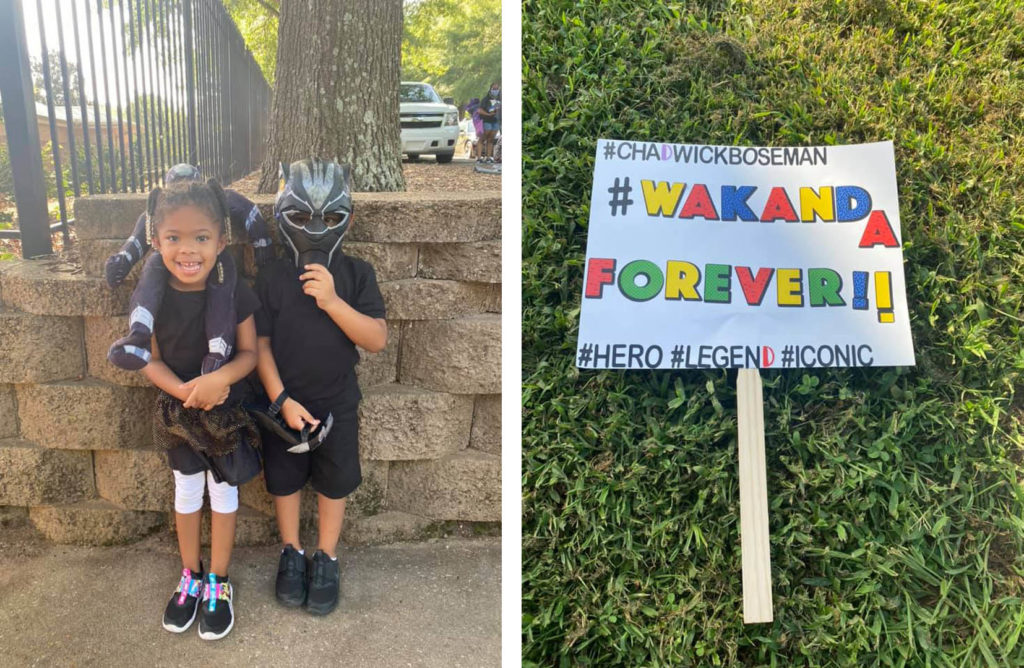 Jasmine Pearson took this photo of her two children at the Anderson memorial for Chadwick Boseman. The children helped make the “Wakanda Forever” sign the night before the event. Photos courtesy of Jasmine Pearson

Stepping into the shoes of legends, Boseman “showed my children you can be anything you want to be in this world, and no matter what color your skin is, you can achieve great goals in life,” she wrote.

Pearson was already grieving before the Anderson memorial. A co-worker of hers was killed after being hit by a car. A family member of Pearson’s also died recently from colon cancer, similar to Boseman. And the coronavirus pandemic claimed the life of her aunt earlier this year.

“This year in all has been a hard one on the economy, workforce, families — and then to have to lose loved ones from the pandemic, natural cause or the hands of police, from the police injustice is all too unfair,” she wrote. “It just makes you look at life and know anything can change at the blink of an eye.”

Williams has argued that when facing all of these anxieties, including the human toll from the pandemic, it’s best to not turn away from the grief. It’s the same for children as well.

“We’re so hardwired to deny death that it even interferes with having a good death.”

“We hide [death] from our kids. We sugarcoat it,” Williams said, adding that there’s an opportunity to have conversations with kids about mortality. “People are born. We have them for a while. We treasure them while we have them, and then they’re gone. All these relationships are temporary.”

Some experts have wondered why there isn’t a greater, collective mourning for the nearly 200,000 lives lost to COVID-19 so far. That massive loss of life — and our country’s lack of reaction to it — have complicated the grieving process.

She said there’s also an additional layer to the grieving everyone is feeling — a sense that the Trump administration has not taken a cautious or serious enough approach to public health amid the pandemic, and the most vulnerable communities are getting fewer resources to combat the virus.

READ MORE: Why chronic stress and COVID-19 are a ‘perfect storm’ for the health of Black Americans

“Knowing that the country isn’t doing everything it can to fight the disease” and especially for communities of color, “that makes it so much harder to cope when somebody’s passed.” Williams said that in this country, we’re really afraid of dying. She pushed back on the idea that this is a universal fear.

“Not every culture feels this way,” she said. “Of course, nobody wants to die, but it’s not a given that we all have to have this horrible, existential fear of death. That’s not a given. That’s something that we learn.”

From a behaviorist’s perspective, Williams said, if you avoid something, your fear around that thing continues to grow.

A better approach to grieving would be to honor the person and their memory, along with reminders of how you and others are enriched by that person, how they were, how they changed society, how they changed the community, Williams said.

Courtney Lovett said she received comments and direct messages from people thanking her for her comic. Several said it helped them to grieve. Lovett said some parents told her they hesitated in telling their children about Boseman’s death, fearing that such news would make them feel defeated. But Lovett’s comic provided a doorway to a conversation around the loss of their hero.

Lovett said the outpouring after Boseman’s death felt like a “collective release.” Grieving for Boseman and his family was, in a way, also grieving for everything that has happened this year.

Left: The boy in Courtney Lovett's comic is mourning the loss of his hero Black Panther, a role made famous by the late Chadwick Boseman. Illustration courtesy of Courtney Lovett