Emmy night is always a chaotic mix of the humorous, the emotional and the inspirational, mixed with some major sequins and glitter. And on this Emmy night, all those elements came together in one glorious moment: Billy Porter’s win as best actor in a drama for “Pose,” the first openly gay actor to win the award.

But Porter’s speech wasn’t the only knock-your-socks-off moment. Michelle Williams gave the audience an eloquent and impassioned lesson on the importance of equal pay for women, especially women of color.

If you didn’t know Phoebe Waller-Bridge before, well, you certainly do now.

First, the British writer-actress of “Fleabag” won for writing on a comedy series, telling the crowd that she found writing “really hard and painful” — but that she did it for the awards. She got to repeat the joke when she won best actress in a comedy, a huge upset over prohibitive favorite Julia Louis-Dreyfus for the last season of “Veep.” 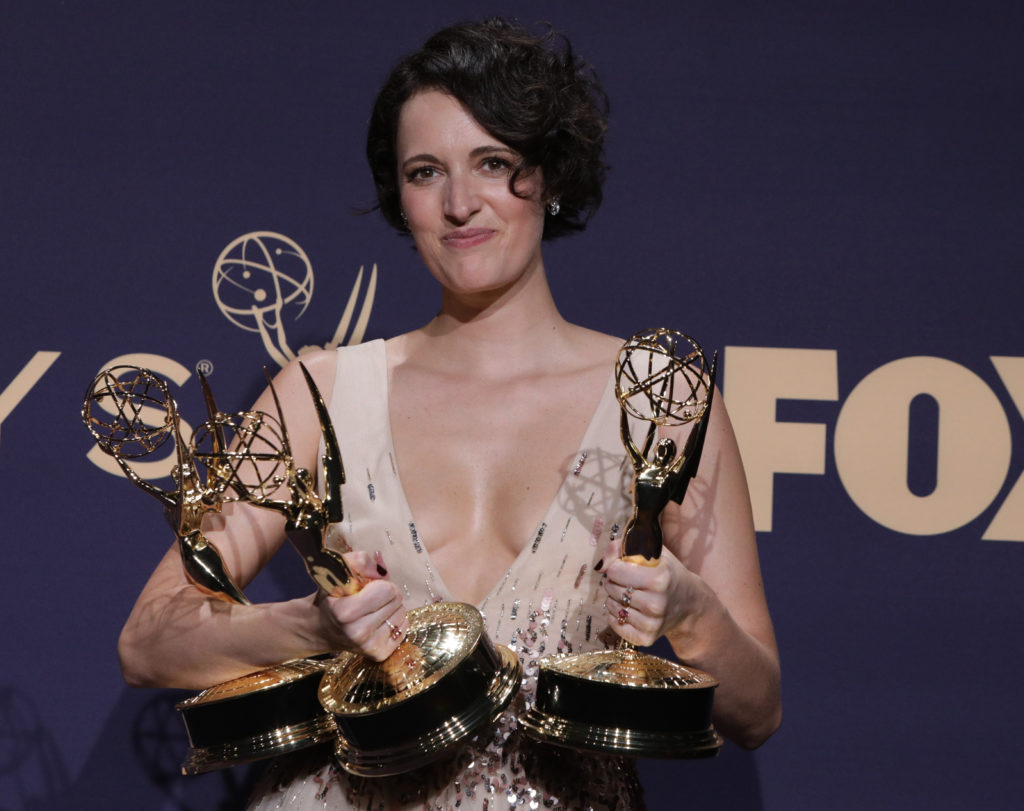 And then Waller-Bridge, 34, made it up to the stage yet again when her show won for outstanding comedy series, again besting “Veep.”

“This is getting ridiculous!” she exulted. In true Britspeak, she called her show’s journey to success “absolutely mental.” She was pretty entertaining when she presented an award with funnyman Bill Hader, too — all in all, a massive night, as the Brits would say.

A memory both powerful and empowering

Then she made a dramatic pivot to a poignant and harrowing memory about her grandmother, a Holocaust survivor, who during the war had been in line “to be shot into a pit.”

She said her grandmother had asked a guard, “What happens if I step out of line?” and the guard had replied that he didn’t have the heart to shoot her, “but somebody will.”

“So step out of line, ladies!” she told the crowd, to cheers.

Far from the Bronx

When Jharrel Jerome won his Emmy for “When They See Us,” he said he felt like he “should just be back home in the Bronx right now chilling, waiting for my mom’s cooking or something.” But, said the 21-year-old, “I’m here in front of my inspirations.” 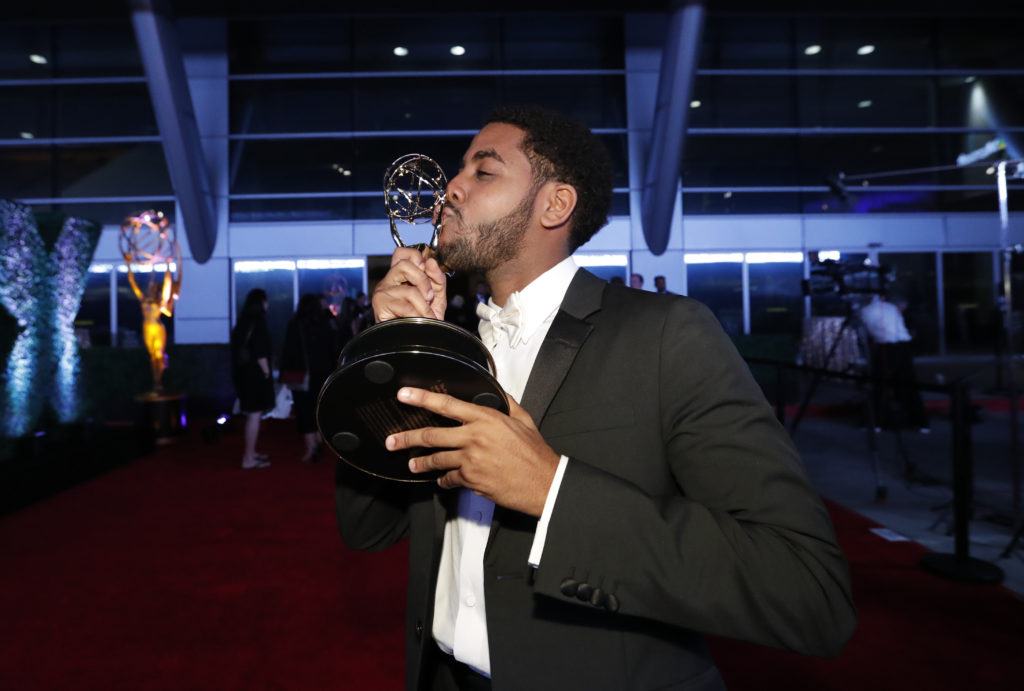 Jharrel Jerome kisses his Emmy for Outstanding Lead Actor in a Limited Series or Movie for “When They See Us” while outside the Governors Ball. Photo by Mario Anzuoni/Reuters

He thanked, of course, director Ava DuVernay, and his “beautiful mother,” who actively cheered him on from the audience. But he saved his most important thanks “for the men we know as the Exonerated Five.” And all five stood up and cheered from their seats: Antron McCray, Kevin Richardson, Yusef Salaam, Raymond Santana, and Korey Wise, the man Jerome played onscreen.

The four-part Netflix series tells story of the Central Park Five, black and Latino teenagers from Harlem who were coerced into confessing to a rape they didn’t commit.

When Patricia Arquette won an Oscar in 2015, she made a plea for pay equality. On this Emmy night, rights for transgender people was on her mind, and for a very personal reason.

Accepting her award for “The Act,” Arquette said she was still in mourning over the death of her sister, Alexis Arquette, who died at age of 47 in 2016.

“I’m so sad that I lost my sister Alexis, and that trans people are still being persecuted.”

Alexis, who was transgender, died from a heart attack and battled HIV for 29 years, according to her death certificate.

“I’m so sad that I lost my sister Alexis, and that trans people are still being persecuted,” she said. “Let’s get rid of this bias that we have everywhere. They’re human beings and let’s give them jobs.”

In the audience, transgender actress and activist Laverne Cox stood and cheered. Cox was carrying a purse that bore a message: “Oct. 8, Title VII, Supreme Court,” it said, referring to an upcoming court decision on workplace discrimination and LGBTQ rights.

It was actress Michelle Williams who raised the flag for equal pay, with an eloquent speech that was one of the most effective of the night.

Accepting the award for “Fosse/Verdon,” she called the honor “an acknowledgment of what is possible when a woman is trusted to discern her own needs, feel safe enough to voice them, and respected enough that they’ll be heard.”

She explained that when she’d needed anything to help her better play dancer Gwen Verdon — more dance classes, more voice lessons, a different wig — she heard “yes,” not “no,” even though they cost money. 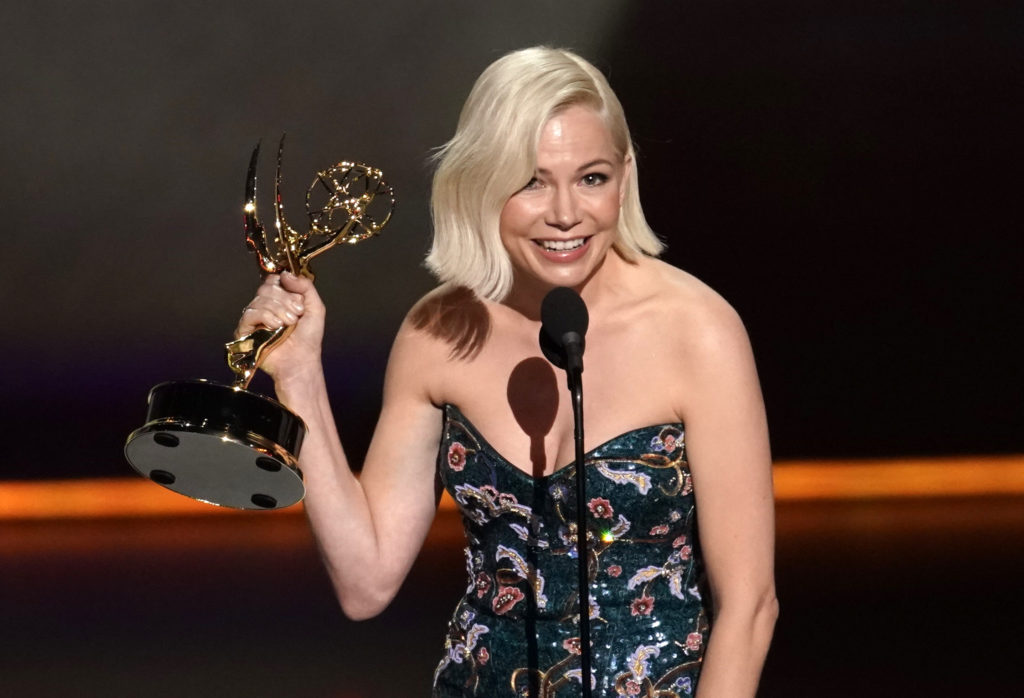 Michelle Williams accepts the award for Outstanding Lead Actress in a Limited Series or Movie for “Fosse/Verdon.” Photo by Mike Blake/Reuters

She also thanked the FX network and Fox 21 studios “for paying me equally, because they understood that when you put value into a person it empowers that person to get in touch with their own inherent value.”

“And then where do they put that value? They put it into their work,” she continued, pointing out that a woman of color makes 52 cents on the dollar compared to her white, male counterpart.

So when that woman “tells you what she needs in order to do her job, listen to her, believe her,” Williams said. “Because one day she might stand in front of you and say thank you for allowing her to succeed because of her workplace environment and not in spite of it.”

The remarks won cheers not only in the room, but on social media. “Michelle Williams just took us to the church of women’s equality,” wrote actress Kerry Washington on Twitter.

It was obvious that it was Billy Porter’s night the moment he sauntered into the Emmy Awards in a huge, lopsided black cowboy hat, a sparkling striped black-and-silver suit, and platform shoes.

Porter has emerged as a huge red carpet star of late. But this time, the “Pose” actor matched his carpet prowess with a huge Emmy victory, becoming the first openly gay actor to win best actor in a drama.

“We as artists are the people that get to change the molecular structure of the hearts and minds of the people who live on this planet.”

“The category is love, y’all!” he crowed to the audience upon arriving onstage.

He then met the historical moment by quoting James Baldwin. “It took many years of vomiting up the filth I was taught about myself and halfway believed before I could walk around this Earth like I had a right to be here,” went the powerful quote. “I have the right. You have the right. We all have the right!”

As he did years ago when his won his Tony, Porter paid tribute to his mother, Clorinda, saying “there’s no stronger, more resilient woman who has graced this earth.”

He also thanked his show’s co-creator, Ryan Murphy: “Ryan Murphy, you saw me! You believed in us.”

He added that “We as artists are the people that get to change the molecular structure of the hearts and minds of the people who live on this planet. Please don’t ever stop doing that.”

Left: Billy Porter poses backstage with his Outstanding Lead Actor in a Drama Series for "Pose". Photo by Monica Almeida/Reuters

How ‘Downton Abbey’ film brings beloved characters back together