‘Everybody wants to be seen’ — exhibit showcases LGBTQ artists in prison

At the age of six, more than 20 years before she was incarcerated for the first time, Jennifer Mayo received her first easel.

It was too tall for her, so her father shortened its legs. She wasn’t the only artist in her family — her mother painted ceramics, but she wanted to do her own work, she told the NewsHour. “I remember begging for canvas and watercolor paper,” she recalled to the NewsHour.

In 2005, after forging checks and invoices for her financial gain, Mayo entered a Texas state prison, where she would remain for two years. Eighteen months after her release, she was incarcerated again, this time for six years and two months. During that time, she continued to produce work in the confines of prison, drawing pictures and creating crafts for other prisoners with No. 2 pencils, colored pencils and a children’s watercolor set.

Today, Mayo’s work is on display at “On the Inside,” an exhibition at the Abrons Art Center in New York City that showcases work produced by LGBTQ prisoners. The exhibition is the culmination of a four-year project by writer and director Tatiana von Furstenberg, who collected thousands of submissions by mail after placing an ad in Black and Pink, a magazine distributed to LGBTQ prisoners across the country.

At the “On the Inside” exhibition, a small box in the center of the room demonstrated the size of a typical solitary confinement cell. Photo by Christopher Watkins

Von Furstenberg said at the exhibition’s opening on Nov. 4 that she was struck by a shared style between many of the folks who submitted. 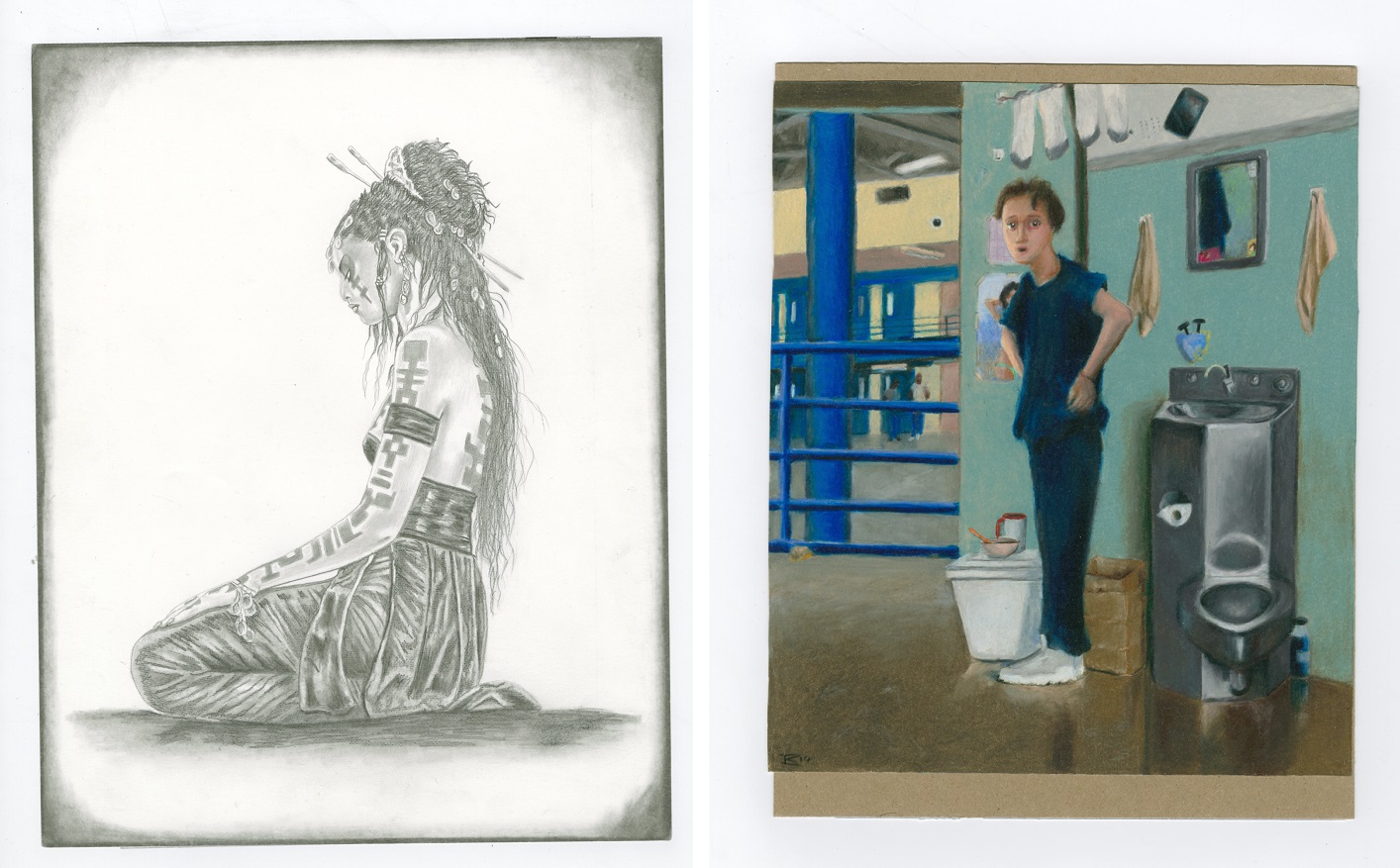 It is difficult to estimate how many LGBTQ adults are currently incarcerated in the U.S. But a 2011 survey by the National Center for Transgender Equality of more than 11,000 trans adults reported that 16 percent of respondents had been incarcerated at least once. These numbers were higher for transgender women (21 percent) and black transgender people (47 percent) — and trans people make up only a portion of the LGBTQ community.

At the exhibition’s opening on Nov. 4, several panelists — including von Furstenberg, Black and Pink Director Rev. Jason Lyndon, and Janetta Johnson, executive director of the TGI Justice Project, a group that advocates for transgender prisoners — spoke about the elevated risks that LGBTQ prisoners face of assault, harassment and solitary confinement. Black and Pink’s 2015 survey of 1,100 LGBTQ prisoners found that respondents were six times as likely to be sexually assaulted as average prisoners. Data suggest that these numbers are even higher for transgender people — a survey that the Bureau of Justice Statistics collected from 2011-12 showed that transgender people are 10 times more likely to be sexually assaulted than the general prison population. 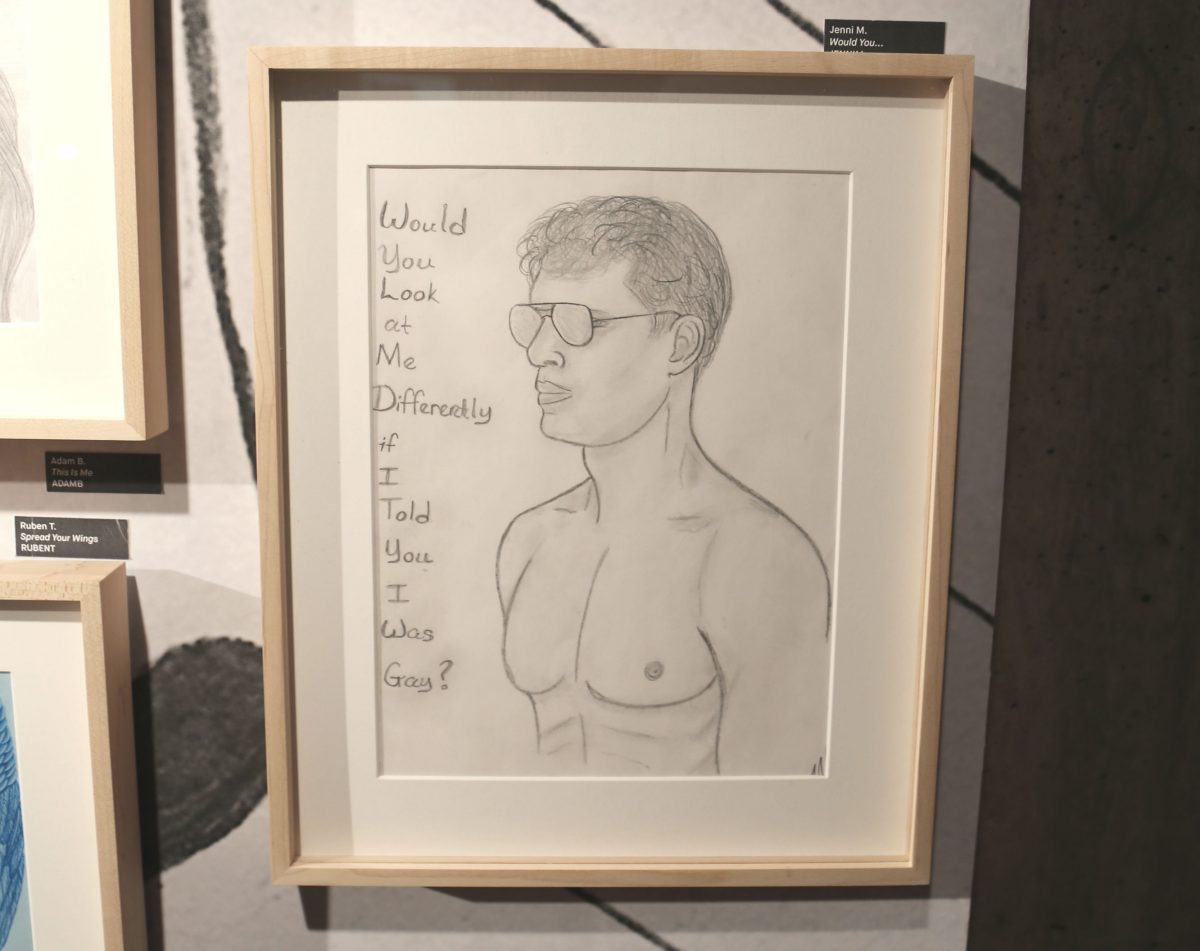 A drawing by Jennifer Mayo appears at “On the Inside” at the Abrons Art Gallery in New York City. Photo by Corinne Segal

While in prison, Mayo’s role as an artist defined her time there and provided an outlet for her energy, she said. “That was my identity there. I was the artist. I was the one you went to when you needed something,” she said.

Her chief source of income was drawing portraits, cartoon characters and other pieces for fellow prisoners, some of whom would send her work home to their families. “I often would try to remind myself that that is the only thing these women can do for their children,” she said.

Mayo submitted nine paintings to the project, and seven were accepted, one of which is now on view at the exhibit. Prisoners received a $50 donation for each accepted piece. 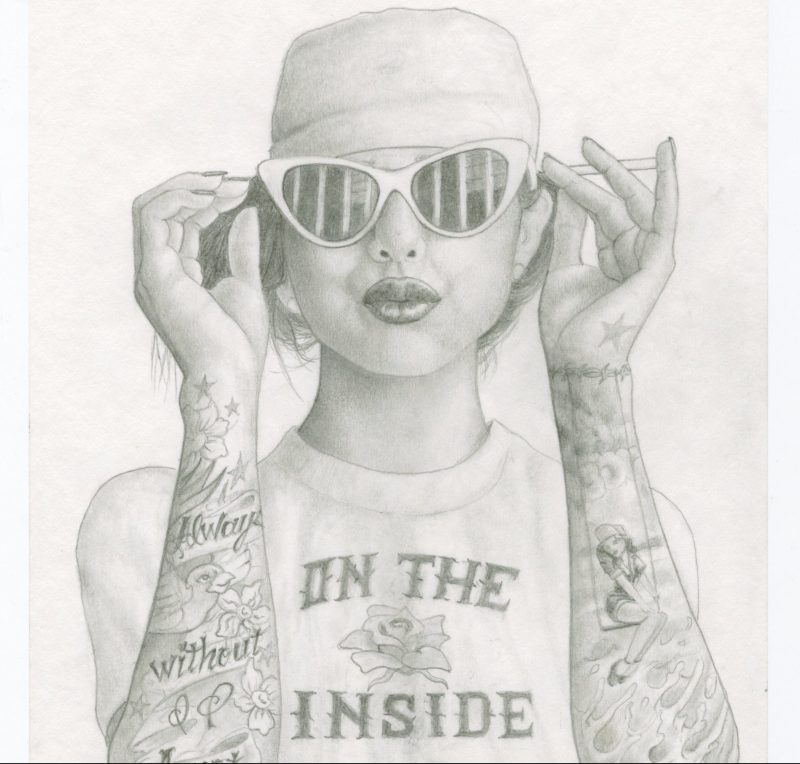 Lyndon of Black and Pink told the NewsHour that creative and artistic outlets in prison empower prisoners through self-expression.

“Prisoner art is an opportunity for the artist to have a moment when they can escape. That while they’re not physically getting out of their cells … it is an opportunity [for] creation, that they’re part of something bigger than just themselves,” Lyndon said.

Now out of prison for more than a year, employed and living in south Texas, Mayo said the project and exhibit helped her move past it.

“To know that somebody valued my art that much was amazing,” she said. “I’m overwhelmed. I’m very overwhelmed and grateful.”

See below for more photos of the exhibition. 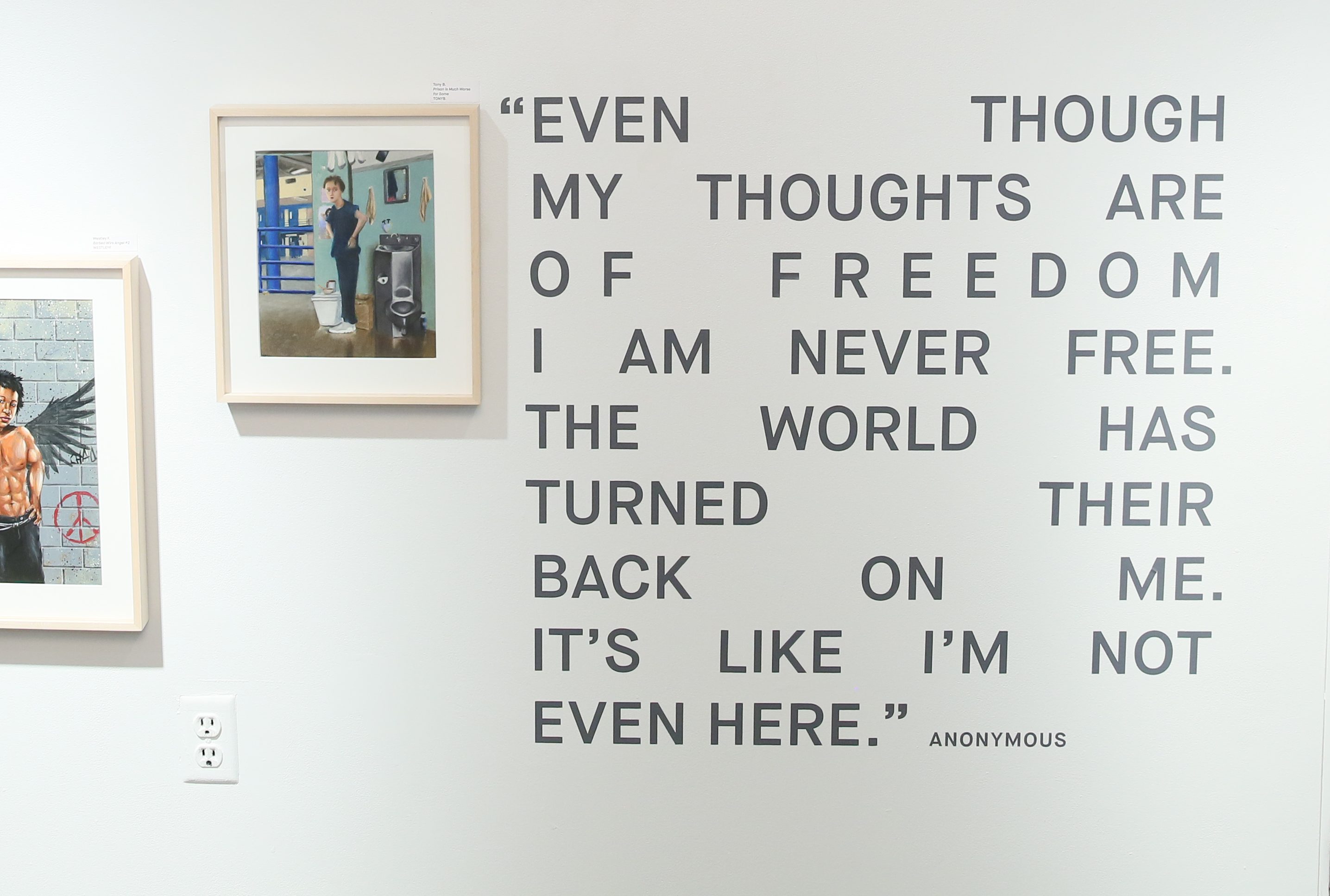 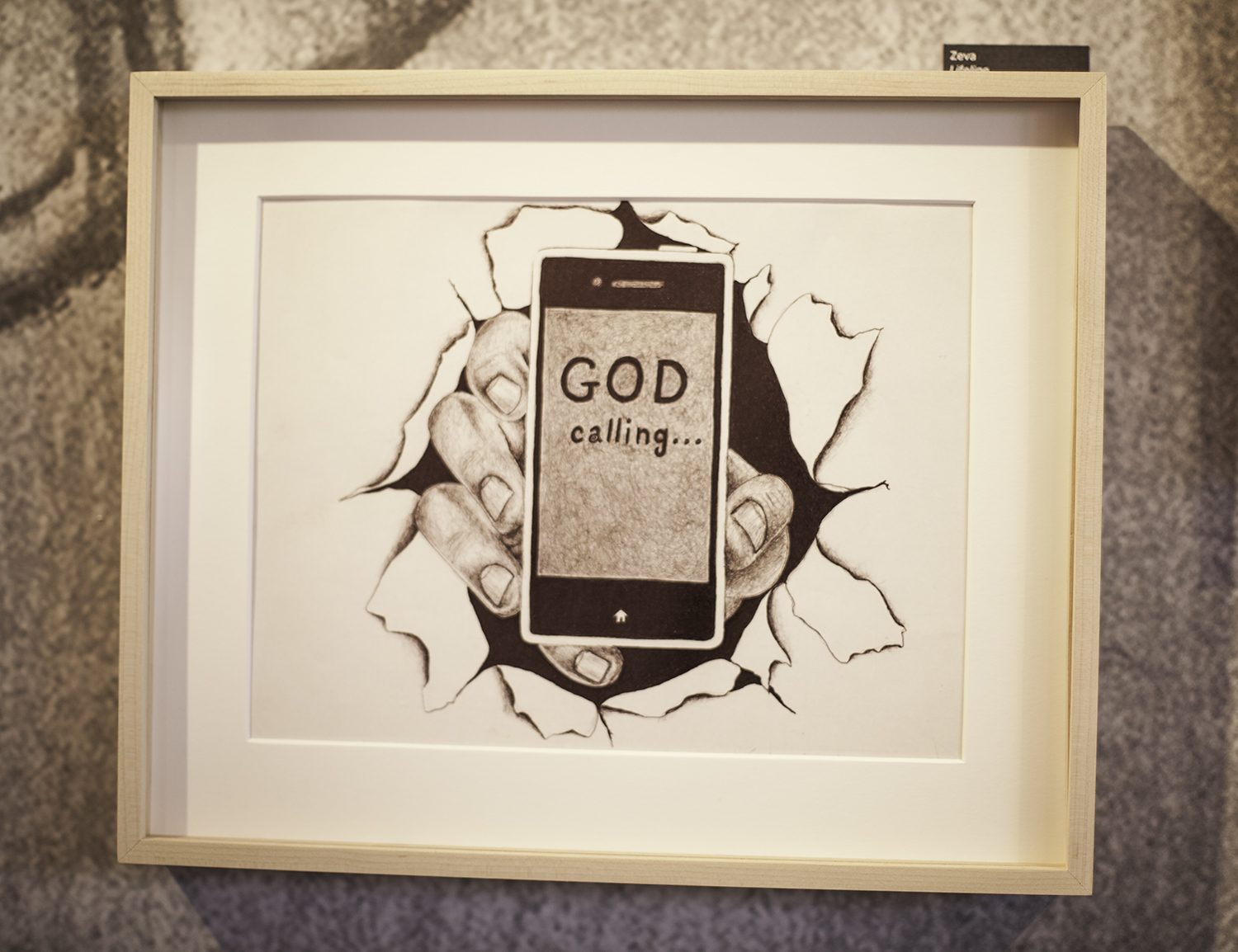 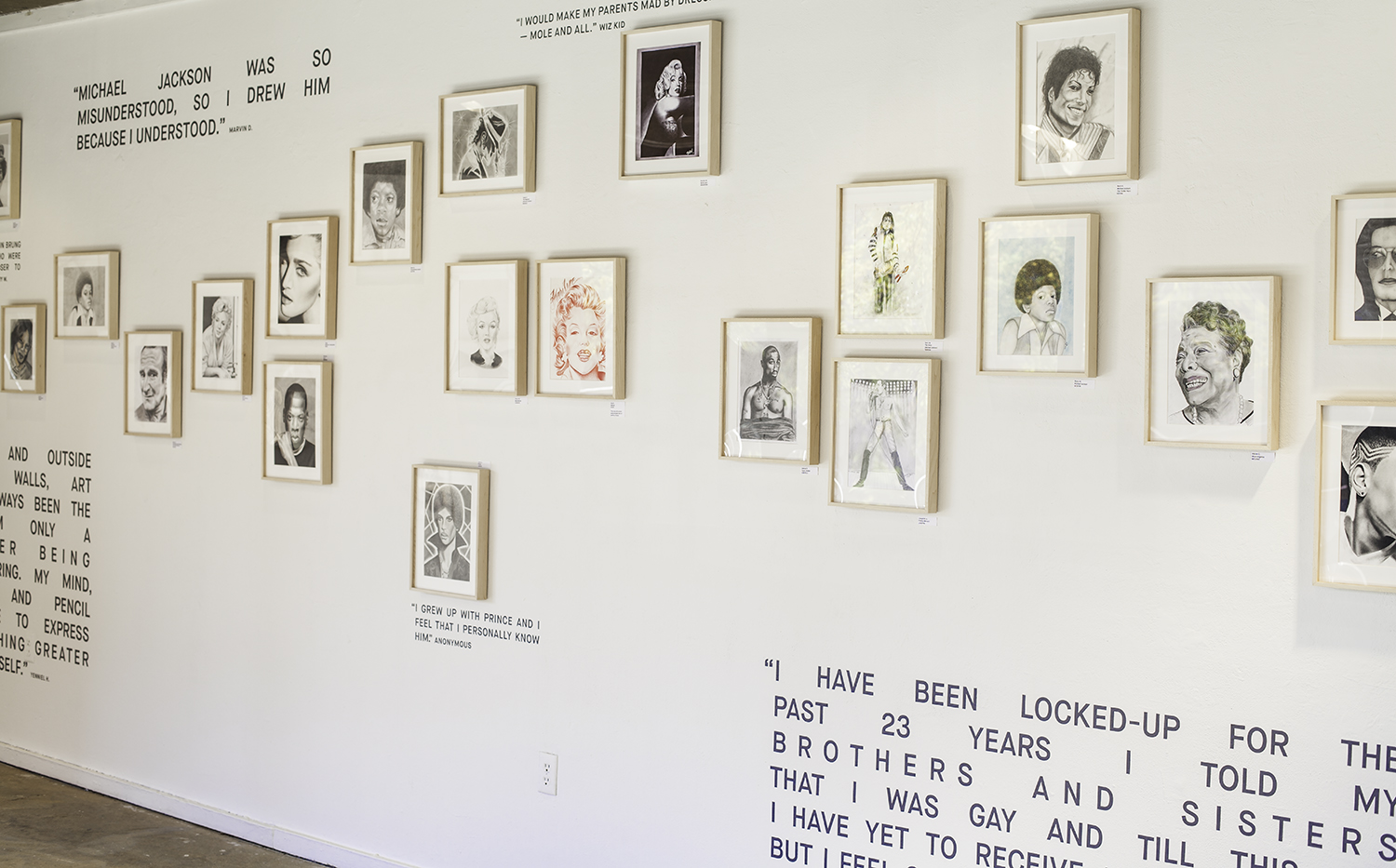 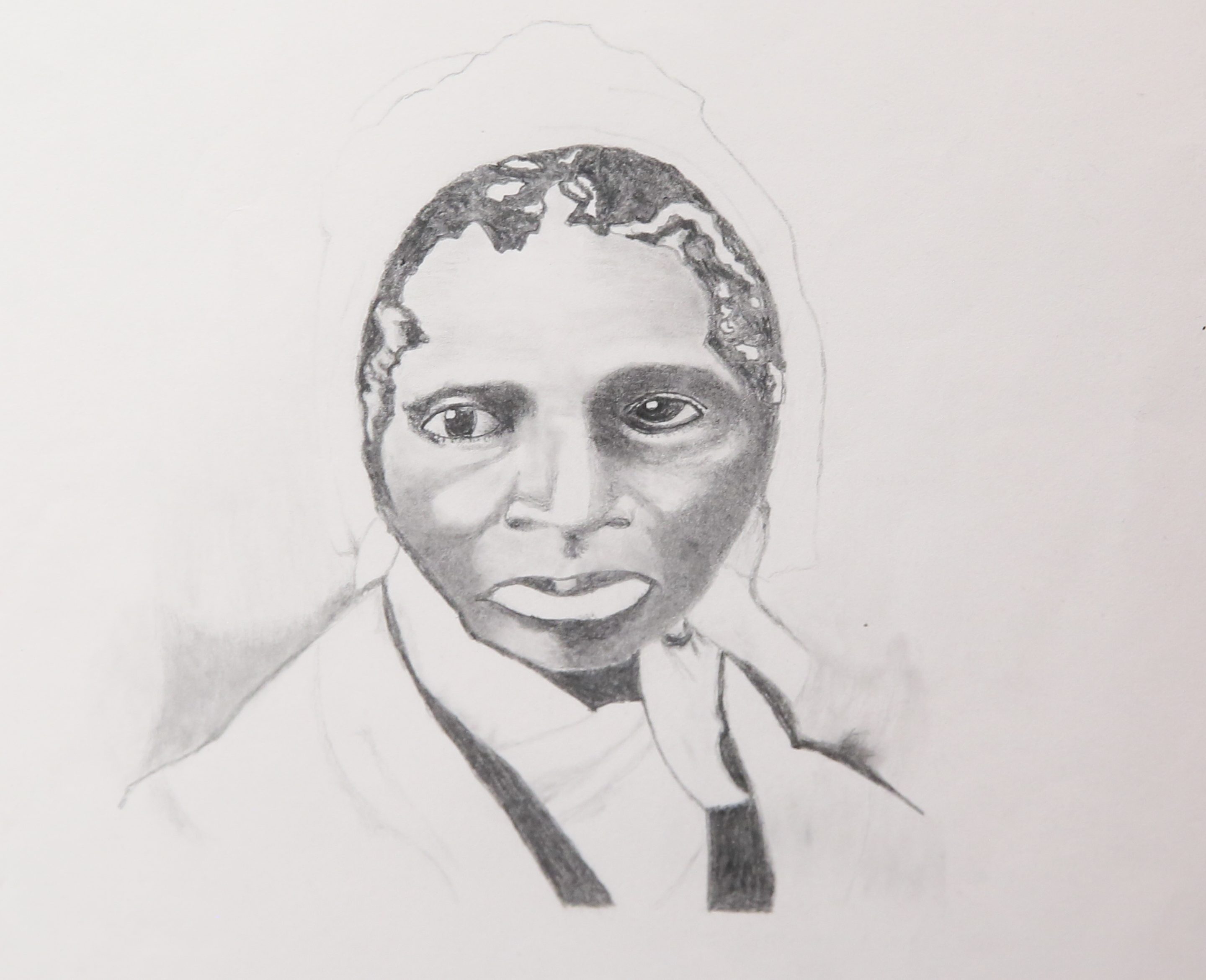 A drawing of Sojourner Truth appears at the “On the Inside” exhibit. Photo by Angela Pham/BFA.com

“On the Inside” is on view at the Abrons Art Center at 466 Grand St in New York City through Dec. 18.

Left: "On the Inside," an exhibit at the Abrons Art Center in New York City, shows a glimpse of artistic creation inside prison. Photo by Christopher Watkins