The production allows students to attend the popular Broadway show and combines the lessons of the Founding Father Alexander Hamilton into their classroom studies. Some students also perform short skits on stage prior to the viewings.

On April 13, the first group of 1,300 hundreds students attended “Hamilton” through the program at the Richard Rodgers Theatre. Before the show several cast members met on stage to field questions from the students.

Here is some of that exchange.

Editor’s note: This transcript has been condensed and editor for clarity. Thomas Kail, the director of “Hamilton,” reads questions submitted by students in the program.

THOMAS KAIL, DIRECTOR: There’s a question from Odyssey who asks, “What were your initial thoughts when you first read or heard the show?”

ANTHONY RAMOS: When I first heard the music, I went bananas. I was like, ‘wow, this is not a musical.’ I heard the demos. I just went crazy and I was like, this is something that’s about to change the game.

THOMAS KAIL: Jasmine asks, “When you were in high school, did you know you would want to end up acting and/or writing? And how did you develop your skills?”

LIN-MANUEL MIRANDA: I started writing musicals at the same time you guys were writing these pieces for us today. I wrote my first musical in 11th grade. It was called “Nightmare in D major.” It was about a fetal pig in AP bio coming back for revenge.

The kids dissected the pig and I’ll never forget — the song was like ‘Pig, I am just a fetal pig / I am not very big / so why did you cut me up in bio class / is getting a good grade worth me getting slayed?’

I always knew I wanted to do this. I was really lucky that I went to a school where there was a lot of student-written stuff and student-directed stuff. So we were empowered to do these things. And it seems like that is happening in your schools, as well. So I’m really excited about that.

VOLTAIRE WADE-GREENE: I kind of stumbled upon this by accident. I grew up training to be a ballet dancer. And as a ballet dancer, you just kind of have like this hustle work ethic. So when I came to New York for the second time — this is my second time back to the city — one of my friends was like, ‘you’ve got to meet this choreographer.’ And the rest is all history. 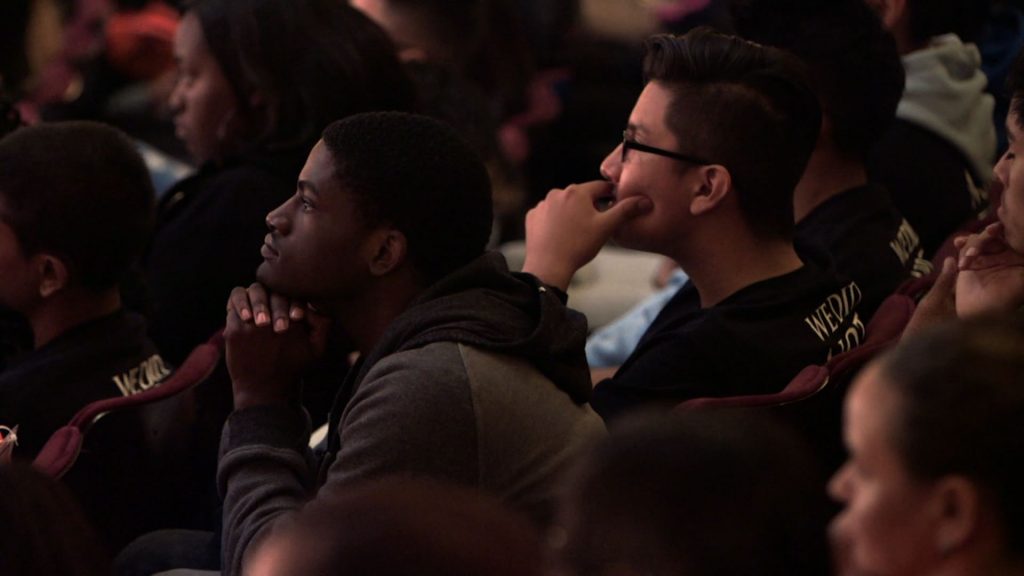 THOMAS KAIL: Miriam asked this: “How has the ‘Hamilton’ experience changed your perspective on history and the foundation of both the American identity and your own cultural identity?”

America is at its best when it’s moving, when it’s growing and evolving. I think “Hamilton” is constantly evolving and changing and reshaping the way that I view myself as a citizen, as a neighbor and as a human being.

THOMAS KAIL: How would you suggest people handle obstacles and how did you early on in your career try to navigate those obstacles?

RORY O’MALLEY: It’s scary to walk on this big hit show stage. The thing is is that when you find something that you love, when you find your passion, you have to realize that that is so special and unique, that some people go through their entire lives wanting to know what that passion is. So if you have that, you cannot deny yourself pursuing it. It has to be when you wake up, your first thought, how can I have that?

I think that if you want something and you pursue it — you never know what the end result of that is going to be. If you want to be an actor, you may not end up on Broadway, but your pursuit of that, if it’s what you love, will make your life so wonderful and beautiful. It’s shows and art like this that make me feel like life is worth living. So why not surround yourself in that community?

So whether it’s writing, being an artist, or if it’s law, if it is something that you are passionate about, go for it, don’t ever give up. 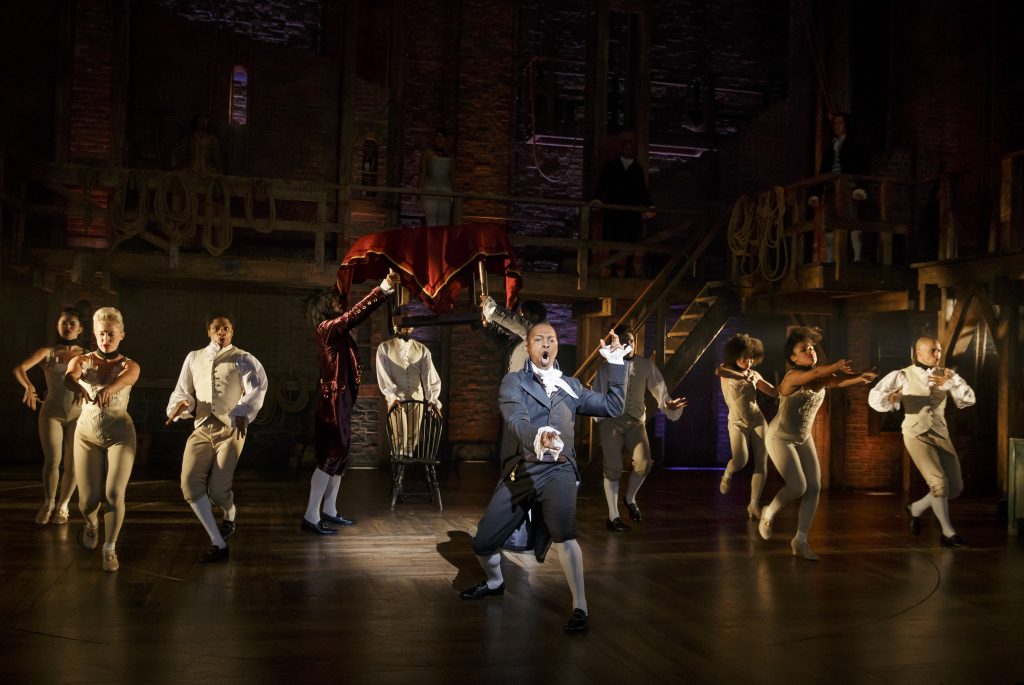 THOMAS KAIL: I have a question here from Kayla. “Is it difficult to manage your personal life while working on ‘Hamilton’ or being in a show in general?”

RENÉE ELISE GOLDSBERRY: I have a 3-year-old and a 6-year-old. I have little children. And, so it is a balance to figure out. Today I dropped my kids off at school and I’ll come home around midnight and my kids ask me every single day, ‘who’s putting me in bed today, mommy?’ And most of the time the answer is not me, OK?

One thing that I learned is that I don’t really pull any of this off by myself. When I’m here, I pull this off with the strength and the support of all the people on the stage with me. And the way I pull my family off is because I have an amazing partner and husband who helps me do it. 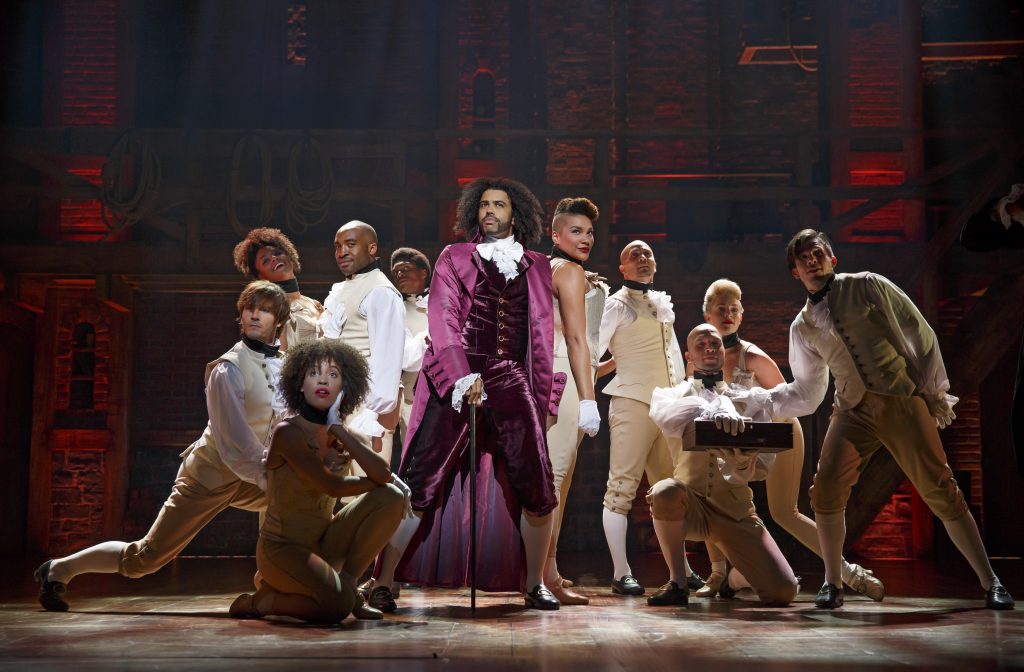 “Hamilton” cast members including Daveed Diggs (center), answered questions from some of the 1,300 students in attendance at the theater before later performing on stage. Photo by Joan Marcus

LIN-MANUEL MIRANDA: My son is as old as this show. He was born two weeks before we started rehearsal off-Broadway.

So he’s 17 months old. And to mark his first steps with our opening on Broadway, it has been such a remarkable thing. I probably get less sleep than anyone you’ve ever met in your life. But at the same time it’s kept me sane.

The success of “Hamilton” and the success of what’s going on has been so crazy that I go home and I change diapers and I go home and I watch the “Chuggingtons” and I talk about trains with my son. One can’t happen without the other. I can’t come here and greet you as joyfully if I don’t get a hug and a ‘Da-da’ before I leave. They feed each other.

You’ve got to have something to keep you sane so that you can enter this very surreal life knowing who you are.