Oh my God, it’s an homage! A writer imagines the story behind Beastie Boys’ ‘Sabotage’ video

When it came out in 1994, the music video for the Beastie Boys’ single “Sabotage” offered a kind of joke for the initiated. The Brooklyn trio who had implored Gen X to fight for the right to party and called out adult hypocrisy were now dressed up as the (literal) authorities. Directed by Spike Jonze, the music video is a mustachioed riff on 1970s cop show genre, complete with loud ties, aviator glasses, squad car chase scenes around Los Angeles, and a donut break.

The 3-minute video, cut to look like a credit sequence for a made-up show called “Sabotage,” makes good use of the hip-hop group’s love for a cheesy costume and career-long goal of trying to make each other laugh.

But could there be more to the story than just style and spoof? For the video’s 25th anniversary, fan and author Jeff Gomez wrote a five-act novel that seeks to fill in the gaps around why three detectives were in dramatic pursuit of “Sir Stewart Wallace” (played by Adam “MCA” Yauch, who died in 2012 from cancer).

Gomez told the PBS NewsHour that it took longer to research than to write. The Oakland, California-based writer said he spent about three months reading cop novels and watching heist movies, researching the Los Angeles Police Department and learning cop lingo. He studied the “Sabotage” video at least another hundred times, keeping track of every action in the video in a comprehensive spreadsheet. 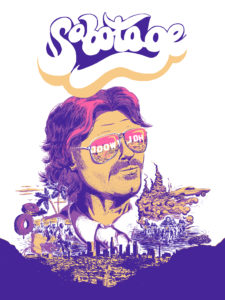 “They created a really great universe, and I just wanted to play around in it for a little bit,” Gomez said, adding that his work is a “total act of love.” Fans can read it on his website, or download a PDF for free.

Gomez’s novel joins other “Sabotage” homages created by Beastie Boys fans over the years. A comic book was designed around the song’s lyrics. “Sesame Street” even did a version with Big Bird on the lam.

The novel also weaves in some lyrics and song titles and bits of the group’s history throughout the story, a touch meant to appeal to hardcore Beastie Boys fans. At one point, a character named the Chief says, “Paul’s Boutique. The best in men’s clothing.”

The PBS NewsHour spoke with Gomez on the difficulties of expanding on the “Sabotage” video, the Beastie Boys’ time in L.A., and what a “station queen” is in cop lingo. The interview has been edited for clarity and length.

What prompted you to do this particular homage to “Sabotage”?

Mainly just as a thought experiment. I had the idea of like, what if I’m watching a trailer through a movie instead of the opening credits to a TV show. It got to be like, “I want to see that movie.” It was just too tempting not to try to see it through to its conclusion.

But why this song from the Beastie Boys?

What did the Beastie Boys mean to you?

I’ve known them for most of my adult life and I’m 48 years old. So, “License to Ill” came out when I was in high school, and that is a great record to experience when you’re in high school. And I just sort of came of age I think when they did.

They’re rightly considered a New York band. They got their start in New York, and they returned to New York, and have a lot of New York in their music. I lived in L.A. when they did, when they were in Atwater Village, and they were making what I consider to be their masterpieces, which are “Check Your Head” and “Ill Communication.” So I always consider them kind of like an L.A. band, and they were almost like my band, and I know a lot of people in L.A. felt that way as well. These guys were effortless tastemakers in an era that was supposed to be all about slackers.

Was there any particular part that was difficult to write about?

There were a few big things in looking at the video that really made it tough to tell the story. The video shows these three guys driving around L.A. They’re obviously detectives, and in every detective story or cop story you ever hear about or see, it’s two people, right? It’s a guy and a partner. The good guys sit in the front and the bad guys sit in the back. And so the first hurdle I had to leap was, why are there three and not two? And not four? But then that also set me on my path for the story. Maybe it was one set of partners and a guy missing his partner. Maybe the three of them were going around searching for their lost partner. So that really gave me actually the first kernel of the idea for the story.

Any specific part of the novel you’re proud of?

I like that I really did try to make it in an L.A. novel. I tried to make a historically accurate and factual. I also really liked that I slightly worked the band in the book because the novel takes place in 1978. Obviously the band didn’t exist until ‘82-3. And yet, they had a hardcore punk alter ego known as Quasar. And so, one of the hardcore songs they actually sang, too, was “Time for Livin,’” which is based on a Sly Stone song from the early ‘70s. And so the club in the novel called “Sabotage” is actually based on a real L.A. club called The Masque, which a lot of the first wave of L.A. punk played in. In fact, a lot of the graffiti that’s in the scenes, the flyers was for bands that played in that era at The Masque. So I thought, “Well, let me put Quasar singing Sly Stone lyrics,” which then wouldn’t sort of break the time-space continuum, if you will, and that’s my way of paying homage to the band and sort of sneaking an ‘80s band into a ‘70s book.

My dad was a highway patrol officer for a lot of years. It was fun to work with him on the book in terms of the slang, what kind of cars they were driving and even some of the Spanish. There’s a lot of things in there, like a “station queen,” “narc ark,” a lot of lingo that I sort of got from ‘70s cop shows.

Did you say “station queen”?

Yeah, that’s someone new. That’s a police officer who’s really not good in the field, that really manages to hang around the station like a “desk jockey.”

Do you plan on running another novel based off another Beastie Boys song?

The A.V. Club covered this when it came out, and they suggested, “Maybe do something on ‘Intergalactic.’” Yeah, sci-fi, this big robot comes down … I’m not sure if I’ll be the person to do it, but I certainly see someone making “Intergalactic the Movie.”