Once a neglected house, ‘Rainbow Embassy’ is a beacon of rebirth in Arkansas

There’s a house exploding with color at an otherwise unassuming intersection in Fort Smith, Arkansas.

No one lives inside; the post office doesn’t deliver any mail. Once notable for its peeling white paint, the abandoned house now stands out in a different way: The exterior brims with geometric shapes and colors.

Multicolored stripes collide with a row of triangles that descend in rainbow hues. There are stars, neon colors and a wall that mimics the design of a backgammon board. Simple shapes form two faces that resemble either the snout of a dog, or beak of a bird. 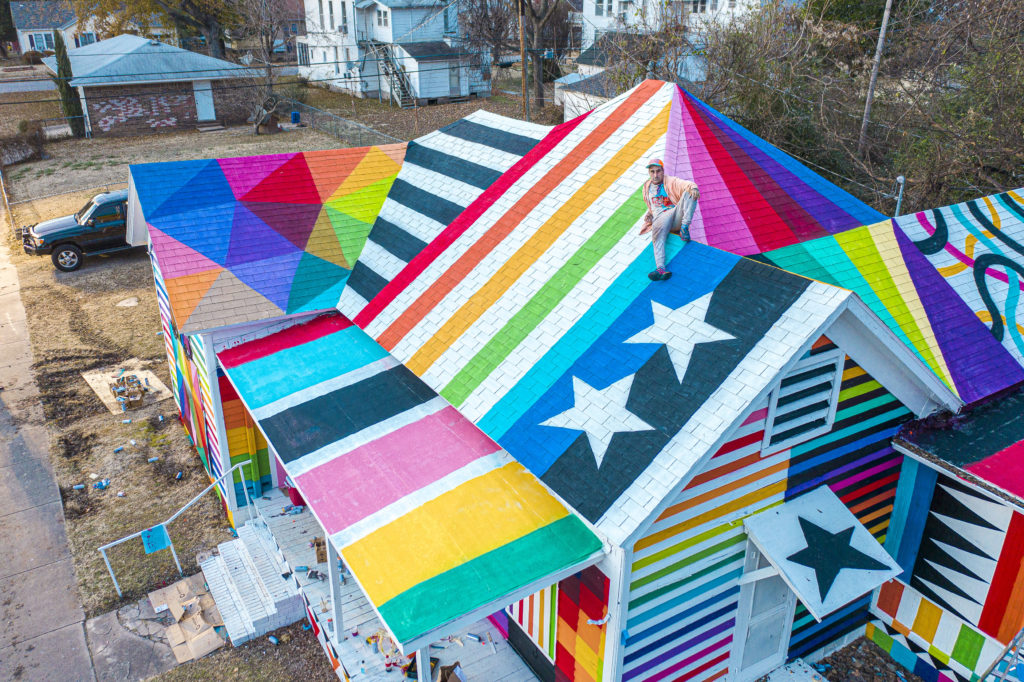 An overhead view of “Rainbow Embassy.” Photo courtesy of Ink and Movement

The playful installation is called “Rainbow Embassy,” and it’s the work of Madrid-based street artist Okuda San Miguel, who transformed the previously dilapidated home into a public art project. Along with an assistant, San Miguel spent four days painting the house and its accompanying shed into a visual spectacle for the families who live in that Arkansas neighborhood.

There’s no welcome mat at the “Rainbow Embassy,” but San Miguel said that the house, taken as a whole, is meant to be welcoming “to everyone around the globe,” regardless of age, gender, race, or any other background. His multicolored creations reflect his desire to reflect a multicultural world. And if buildings, like churches, are shaped by ideologies held by the people who create them, then the embassy’s viewpoint is that there are many viewpoints. 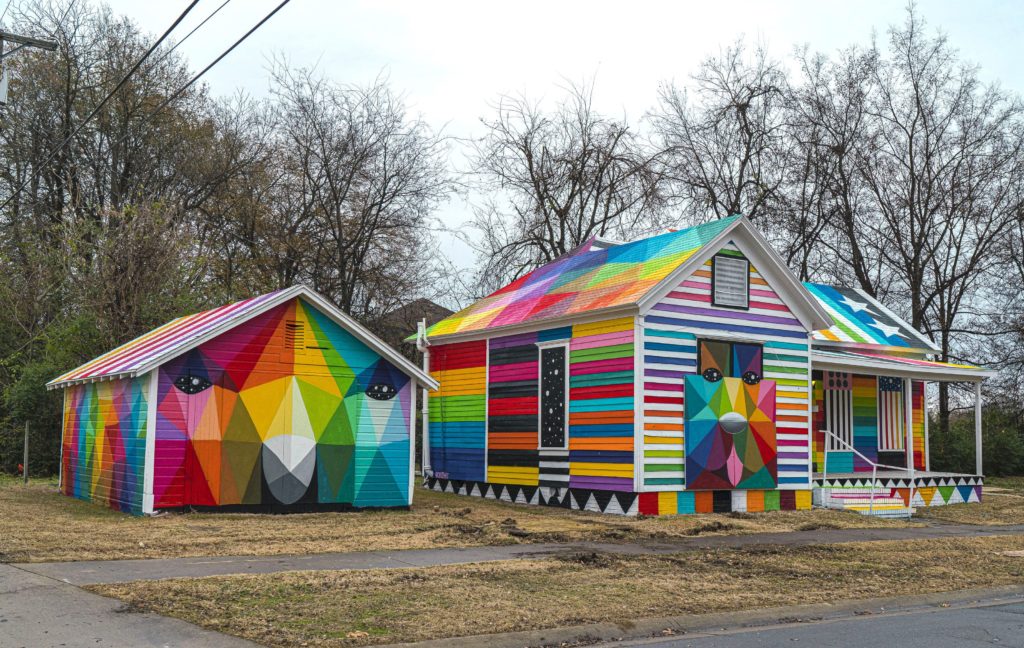 A closer view of shed in “Rainbow Embassy.” Photo courtesy of Justkids

San Miguel creates work in social spaces where communities converge. That includes his ceiling mural at Denver’s International Church of Cannabis — a place of worship devoted to ritual use of pot — where the artist reimagined a Michelangelo fresco through a pop surrealist lens. The street artist has also adorned buildings and other public structures in Germany, Russia, Morocco, China and Taiwan.

San Miguel said these often large-scale pieces, including the “Rainbow Embassy” in Fort Smith, demonstrate his desire to transform architecture, including spaces not typically associated with a street artist.

When San Miguel travels to a new location, he’s inspired by the people who live there. He said in an email that he’s driven by “a real sense of the transformative power of art and how it can improve surroundings.”

A “spark” for Fort Smith’s downtown

San Miguel has left his mark on Fort Smith before.

In 2016, San Miguel refashioned a different abandoned building downtown into his “Universal Chapel.” Like his recent “Embassy,” the chapel was a burst of color among the more muted buildings that surround it. A historic Catholic Church across the street may have been taller, but it didn’t use every color in the crayon box. 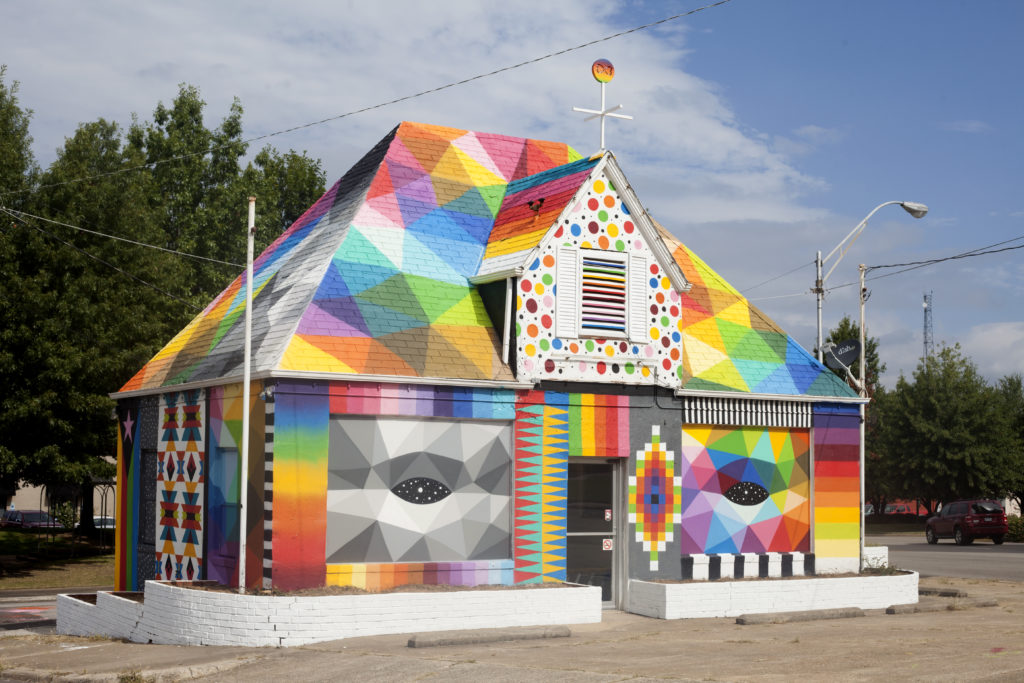 Justkids, a curating firm that specializes in public art,, and local nonprofit 64.6 Downtown, commissioned him to take over the space in an effort to help revitalize the area. On each block in Fort Smith’s downtown corridor, there is likely to be an empty storefront, said 64.6 Downtown director Claire Kolberg. The hope was to “spark” economic development through art and culture, by bringing international artists to Fort Smith, said director Claire Kolberg.

As such, the “Universal Chapel” was eventually replaced by a park and plaza. “It did exactly what it was supposed to do,” Kolberg said in an email, saying it brought an underutilized corner of downtown Fort Smith back into focus and lead to an opportunity for development.

San Miguel’s “Embassy” could face a similar fate, Kolberg said, adding while 64.6 Downtown is mindful of an artwork’s longevity in an urban space, “this kind of artwork is ephemeral.”

“In some sense, it does have a shelf life,” she said, but that the goal for the artwork is for it to live as long as it can for the neighborhood to enjoy. 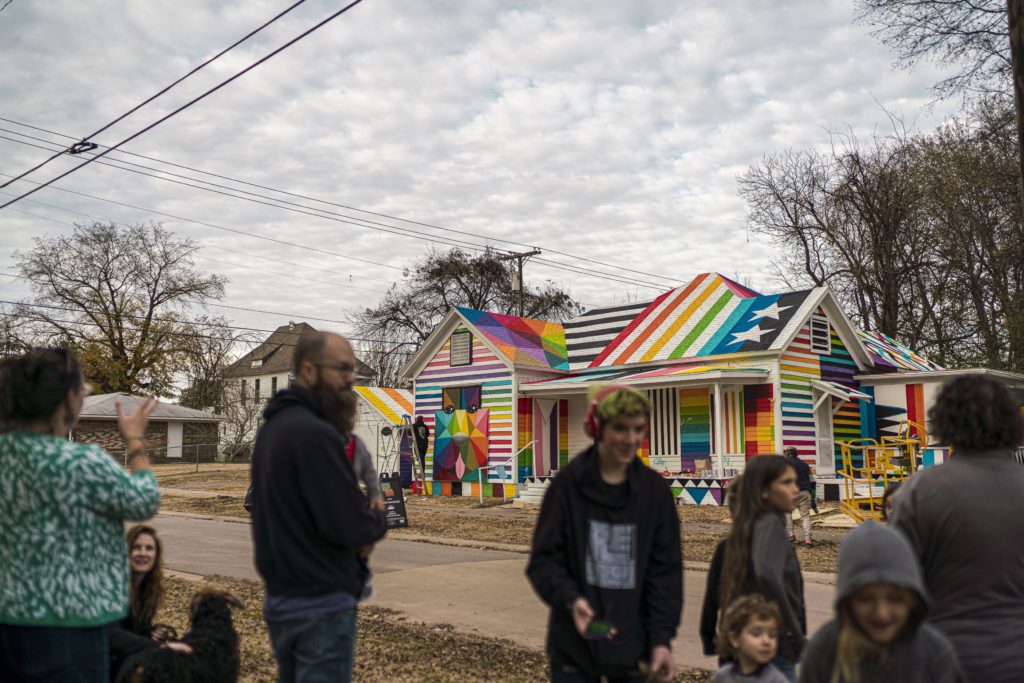 San Miguel’s technicolor chapel and embassy were created during separate years of The Unexpected — an annual arts festival that began in 2015. It grants artists like San Miguel and others the chance to use Fort Smith’s downtown as their canvas.

Kolberg, who co-founded The Unexpected, said the effort has pulled people to a city that has “suffered greatly economically.” Fort Smith is Arkansas’ second-largest city, and a manufacturing center in the region. However, its growth in some crucial measures — population, jobs — has stagnated.

Public art can reflect a city’s image or history, and Fort Smith residents get to “export who we are.”

Beyond increasing foot traffic to Fort Smith’s main downtown corridor and engaging the community, Kolberg said artwork like Rainbow Embassy “allows us an opportunity to challenge perceptions, not just that people have about themselves living within Fort Smith, Arkansas, but that outsiders have of Arkansans.”

Public art can reflect a city’s image or history, and Kolberg said Fort Smith residents get to “export who we are” when participating artists share their artwork. “We now have all of those thousands of eyes looking at Fort Smith as an artist-friendly community.”

In Fort Smith, San Miguel’s work isn’t exactly a traditional reflection of the city with a long manufacturing history. Yet Kolberg said the art is “very much inspired by the social element and the climate of the community.” In his first piece created for Fort Smith, San Miguel blended his street-art style with Native American symbols associated with the city.

So far, more than 50 art projects — murals, performances, exhibits — have been curated through The Unexpected festival, Justkids founder and curator Charlotte Dutoit said in an email.

“It has been very inspiring for the community, especially for the young people, encouraging them to participate in the city’s ecosystem and create their own projects and initiatives,” she said. 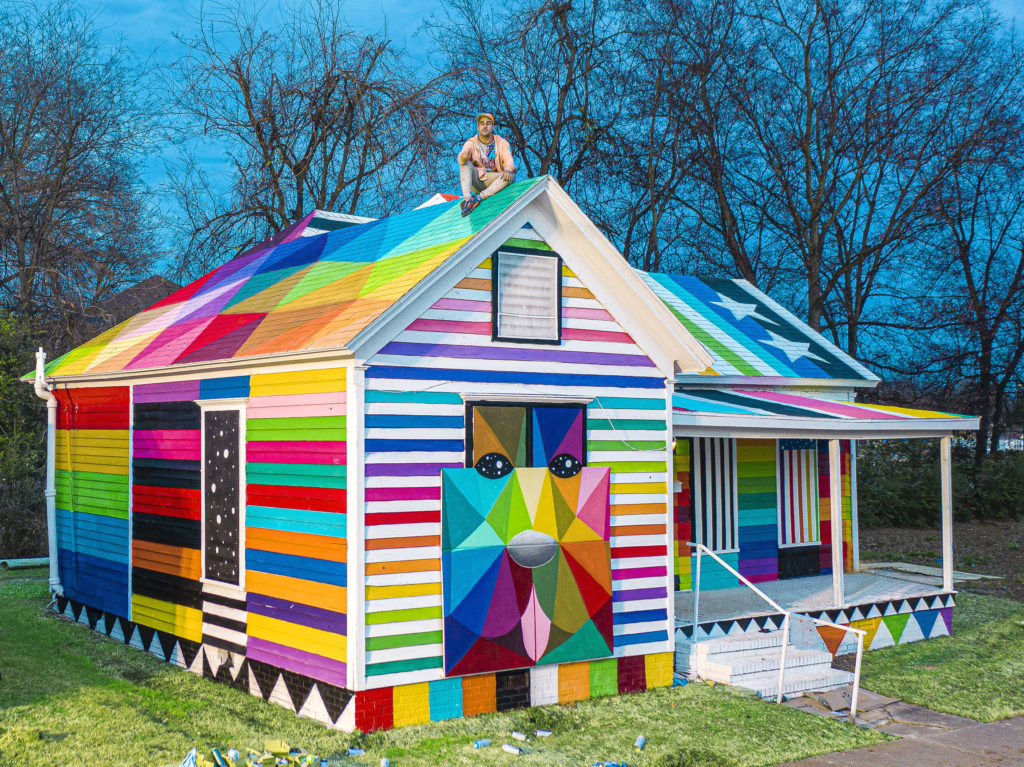 San Miguel’s “Rainbow Embassy” is adjacent to a middle school, and the artist’s collaborators all said it was important that children would have the opportunity to see it on a daily basis.

For San Miguel, the artwork is meant to inspire a message of hope, especially for the younger generation in the neighborhood who may pass in front of the house.

If you allow your imagination to look beyond the painted surface, one window on the “embassy” looks like a portal to outer space, an entryway that wasn’t there before.