One of the things that poetry is really good at, says U.S. Poet Laureate Tracy K. Smith, is reminding us “that, beneath all of the large groups that we belong to, we’re individuals. We are able to empathize with their experience even if it, on the surface, seems quite different from our own.”

As the nation prepares for the midterm elections, when millions of Americans will come together to make their individual voices heard through voting, a new collection, “American Journal: Fifty Poems For Our Time,” invites readers to explore the diversity of American experiences in a different light.

Poetry is an invitation to submit to another person’s reality, and discover how it enriches your own.

Culled from the works of living American poets, Smith chose the pieces in this collection to “collapse the distance” between readers and the varied realities of their fellow citizens across the nation.

According to Smith’s introduction, the book takes its name from the work of the first African-American Poet Laureate Robert Hayden. In Hayden’s poem “[American Journal],” an alien makes a study of the Earth, a “nation in progress” that is still reckoning “with the implications of its history,” Smith wrote.

With works representing a range of geographic locations and poetic styles, Smith’s goal was to gather a core group of voices that could challenge both the poetry novice and aficionado to reexamine their own perspectives. 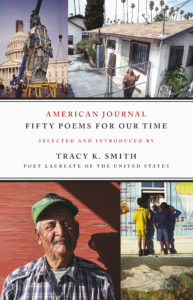 The collection also cuts across a wide spectrum of styles and subject matters, exploring themes like addiction, indigenous rights, and small-town living. Included in its pages is Danez Smith’s “summer, somewhere,” a fantasy where “boys brown/as rye play the dozens & ball” without “language/for officer or law, no color to call white.”

In Jehanne Dubrow’s “The Long Deployment,” a grieving military spouse sleeps alone, breathing a lost love’s “body in the sheet/until he starts to fade, made incomplete/a body almost empty in its case.”

The poems, Smith said, are a reminder that our individual realities do not take precedence over someone else’s. They are an invitation to think about our own capacities for empathy, and may, perhaps, “lead us into a more attentive and more generous or compassionate sense of who the people in the world with us are.”

In Ross Gay’s “becoming a horse,” empathy is a central theme — something Smith said is useful to think about with elections around the corner.

In the piece, a man tending a horse realizes what it means to step into another being’s reality.

becoming a horse
BY ROSS GAY

It was dragging my hands along its belly,
loosing the bit and wiping the spit
from its mouth that made me
a snatch of grass in the thing’s maw,
a fly tasting its ear. It was
touching my nose to his that made me know
the clover’s bloom, my wet eye to his that
made me know the long field’s secrets.
But it was putting my heart to the horse’s that made me know
the sorrow of horses. Made me
forsake my thumbs for the sheen of unshod hooves.
And in this way drop my torches.
And in this way drop my knives.
Feel the small song in my chest
swell and my coat glisten and twitch.
And my face grow long.
And these words cast off, at last,
for the slow honest tongue of horses.

“becoming a horse” from Catalog of Unabashed Gratitude by Ross Gay copyright © 2015. Reprinted by permission of the University of Pittsburgh Press.

Ross Gay is the author of three books: “Against Which”, “Bringing the Shovel Down”, and “Catalog of Unabashed Gratitude”, winner of the 2015 National Book Critics Circle Award and the 2016 Kingsley Tufts Poetry Award. “Catalog of Unabashed Gratitude” was also a finalist for the 2015 National Book Award in Poetry and nominated for an NAACP Image Award. He is a founding editor, with Karissa Chen and Patrick Rosal, of the online sports magazine Some Call it Ballin, in addition to being an editor with the chapbook presses Q Avenue and Ledge Mule Press. Ross is a founding board member of the Bloomington Community Orchard, a nonprofit, free-fruit-for-all food justice project. He has received fellowships from Cave Canem, the Bread Loaf Writer’s Conference, and the Guggenheim Foundation. Ross teaches at Indiana University.