When Adrian Matejka and his family moved to Indianapolis in the 1980s, he says he was not a very cool kid. He was near-sighted, unathletic, his biological father was gone — and he lived in the city’s Section 8 housing.

The 1980s was the era of the space shuttle, and, like many kids, he watched with fascination. But his interest also went further than most; he quickly became, he says, a full-blown sci-fi and comic book geek. In many ways, this served as a kind of diversion.

“You could be here or on another planet, and every place you go offers an opportunity to be a different person,” he said. “I saw on some basic level this opportunity for escape from who I was and where I was.”

In 2013, some 25 years after he left Indiana, Matejka – who had grown up to become an award-winning poet and a finalist for both the National Book Award and Pulitzer Prize — moved back to the state. It was a decision that came with an unexpected overload of memories: about Indiana, about escaping poverty, about his childhood fixation on space. To make sense of that, he began writing poems, which have been collected in a new book called “Map to the Stars.”

The book’s poetry, which is semi-autobiographical, is set between the years of 1981 and 1988. Within those years, it traverses the high-flying realms of astronauts, space shuttle launches, planets, and Star Trek, but also the earthly problems of growing up poor: powdered milk, shut-off electricity, thin walls, squabbling neighbors. At many moments, we see the poem’s narrator look to the stars for escape. 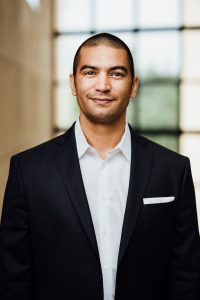 “We didn’t have any solar system models at PS113, so I had to get my own,” Matejka writes in the poem “Mail-Order Planets.” “I dove into dumpsters searching … dug through frozen dinner boxes; /apple cores … three months of collecting; I had enough money to order our system from the back of a Star Trek comic … but the solar system never came.”

Star Trek is a recurring motif in “Map to the Stars,” with titles to several of the poems even mimicking the show’s use of “stardates,” a fictional way of measuring time that was relayed as voice-over in the show’s “captain’s logs.”

In the poem, “Stardate 8809.22,” which is set in 1988, the narrator is old enough to realize that — because he grew up black, poor and near-sighted — perhaps he would not make it to space after all.

“By the time we get to this, the speaker has given up on all these far flung ideas of making it to outer space. I imagined this poem as the resolution of all that,” Matejka said. “The whole book is about systems, some economic, political, or interpersonal.”

“Map to the Stars” unpacks human systems like race, poverty and parenting. But it also examines larger ones — like the system of gravity and momentum. “The things,” Matejka says, “that make the universe spin.”

If there was ever a chance to go to outer space,
it wasn’t here; it wasn’t for me, as off balance
on this distant planet as a buster getting a mouthful
of knuckles. If there was a possibility of making it
out of this heliosphere, there never really was here.
Four eyes giggling at me like a laugh track. Black
skin, you can’t win in the space race no matter
what Sun Ra says. Everyone except him agreeing
on these facts like a laugh track. Looking up through
the round circumstance of a basketball hoop from
a suburb of amateur astronauts. Looking up from this
corner of black constriction; wind knocked out
of words. This cricket‑ticking suburb of fanciful
neighbors & their distant, but unrelenting chatter.

Adrian Matejka is the author of four collections of poems, including “The Devil’s Garden” (Alice James, 2003); “Mixology” (Penguin, 2009), a winner of the 2008 National Poetry Series; and “The Big Smoke” (Penguin, 2013) which was awarded the Anisfield-Wolf Book Award and was a finalist for the National Book Award and Pulitzer Prize. His new book, “Map to the Stars,” was published by Penguin in March 2017. Among his other honors are a Guggenheim Fellowship, a Lannan Literary Fellowship and a Simon Fellowship from United States Artists. He is the Ruth Lilly Professor/Poet-in-Residence at Indiana University in Bloomington.

Left: The Milky Way is seen in the night sky around telescopes in May 2015. Credit: REUTERS/Amr Abdallah Dalsh