Poet and veteran teacher Stanley Plumly continues his exploration of personal memories, juxtaposing his childhood with 74 years worth of knowledge and perspective on the world, in his latest collection, “Orphan Hours: Poems.” 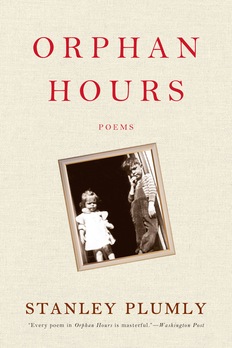 In addition to his writing, Plumly has been a professor of poetry for more than 50 years, teaching several generations of students at more than a dozen universities. He currently is the director of the creative writing program at University of Maryland, College Park.

Plumly’s poems explore the natural world, familial relationships, politics, history. All are autobiographical. “Why not say what happened,” Plumly said in an interview with the PBS NewsHour.

The phrase for the title of his latest collection came from poet Percy Bysshe Shelley’s “Posthumous Poems”:

Orphan Hours, the Year is dead,
Come and sigh, come and weep!
Merry Hours, smile instead,
For the Year is but asleep.
See, it smiles as it is sleeping,
Mocking your untimely weeping.

In his poems, Plumly captures short moments in time with grandeur. On his birthday and wedding anniversary, he was enjoying the view of the Atlantic Ocean from the outer banks of Maryland when he saw a bluejay fly past, which became the image that inspired his poem “The Jay.”

In white Adirondack chairs, on the wave-crest of a dune,
looking out over the gray-green-to-cobalt-colder-blue
of the Atlantic, drinking decadence in large Barolo
portions, taking in, like sea-air, the view and ocean
silence, it’s difficult to imagine not being here,
or, worse, never being here again, or, worse, never
having been here. My mother never saw an ocean,
and Wallace Stevens never traveled except by Pullman
to Key West and all the stops between. He speaks,
in “Madame La Fleurie,” of his mother as the raven
“waiting parent,” thought mother also means the earth,
welcoming the child back to the beginning and end.

Naturally the sun is falling, which had risen in first
light only this morning, burning its stunning star-path
perfect to this place of witness. Now that it’s a rose
disintegrating, in all the colors of the spectrum
all at once, we can look at it the way it is, on fire.
The way, too, the big male of a blue jay on the snow fence
to the right, watching with us, waits for the dark
and the second the sun is gone he’s gone just over us,
a few feet at the most, likely into the safety of a hedge.
We’d been imagining the need to recognize the moment’s
moment before it disappears, as if you could know

a thing before it happens, life in the future tense,
when, in fact, like sunlight on the water here and there,
we live in one time but think in another. We were,
if not exactly, close to drunk, so we lifted to the light
our full glasses. The jay was beautiful. Especially
in the air, blue on blue, his white wing-spots and white
touch on the tail shining in that instant of the sun
slipping under. Not once, in his happiness or reverence
or indifference, did he sing, complain, or say anything.
He flew on a line drawn in time from now to then.
I can still see him, though finally he was nothing
but a blur inside the death of everything that happens.