Chef Jamie DeRosa is no stranger to cooking in foreign places. He’s braised, seared and blanched everywhere from the U.S. to Canada, the U.K. and Beijing. But last month he was able to add a country with more personal significance to that list — Cuba.

“Living in Miami, it’s a hot topic,” DeRosa said. “I work with Cuban Americans, my grandfather was from Cuba. I have that connection to what has happened over the last 50 years, but it’s just different, you don’t ever get to see the other side. I didn’t have any idea what Cuba would be like and I think the same holds true for the people, I didn’t have an idea what their side was. It was interesting to hear from the other side.”

DeRosa led a six-day tour exploring Cuba’s culinary culture. As part of that tour the group visited tobacco houses, distilleries, markets, farms and restaurants. What most impressed DeRosa was the almost completely organic and largely local style of farming he saw on the island, which resonated with his own food philosophy, which is to use simple, seasonal foods to create quality dishes.

“It was good to know that they stayed true to their roots in a time when the way of life was very difficult to them,” he said. “They are very proud to be part of a similar movement of farm-to-table in the U.S.”

At the end of the tour, DeRosa teamed up with Cuban chef Alain Rivas to present a four-course meal to the group. The first course featured a lobster ceviche with pickled guavas and guava sorbet. For DeRosa, the meal was a special one.

“I chose that menu because at the restaurant we cooked at, the owner had his own fishing boat, which is pretty rare in Cuba. So I had scheduled to do a ceviche dish and I figured we’d fill it in with whatever fish they caught, and when we went out to the docks they had all this great local lobster. … The guavas were local, something I picked out from the farm, and back to me being the purist, I thought of using that ingredient in the fresh simple manner. I wanted to show the chef that you could take a few simple ingredients and create a great dish from it.” 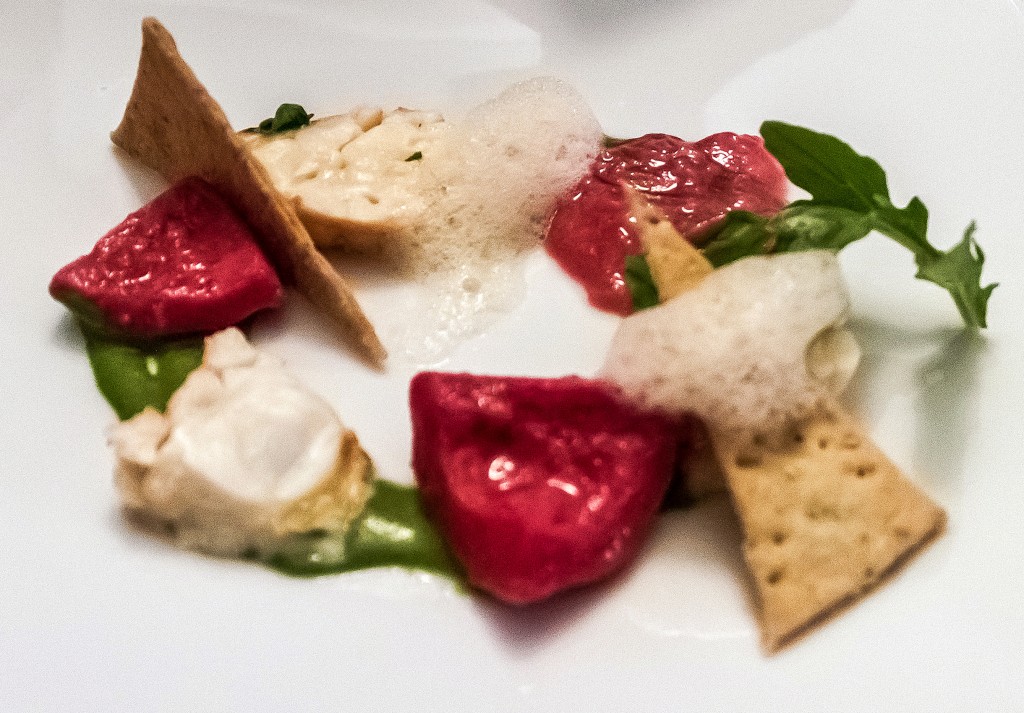 Bring liquid and vegetable mixture to a boil for 15 minutes, chill and pour over lobster tails. Marinate overnight. Strain liquid and reserve.

Add 25 grams of soy lecithin to poaching liquid and use hand blender to foam.

* 1 kilogram guava, peeled and sliced in half
* 250 milliliters of white vinegar
* 50 grams of sugar

Pickle guava with vinegar and sugar and let sit for two hours.

Use fresh guava and cut in half for plating.

Blend these ingredients until smooth.

Add pickle liquid to dress arugula, plus salt and pepper.

Draw a circle on the plate with chimichurri. Slice medallions of lobster and set along the circle. Add fresh and pickled guayaba (2 pieces of each). Add some of the dressed arugula on the lobster and pour coconut marinade foam over the lobster.