She is the descendant of slaves in Alabama. He was an immigrant, who fled war in his homeland of Eritrea. Together they shared a quintessential American love story.

Poet Elizabeth Alexander met artist Ficre Ghebreyesus in New Haven, Connecticut, 19 years ago. After a whirlwind courtship, they married, had two sons and settled into a life filled with books, art, food and their sons’ sporting events. Then, four days after a surprise 50th birthday party, Ghebreyesus died of a heart attack as he was exercising on a treadmill in their home.

After his death, Alexander felt the urge to write — every day — to try to preserve the moments they shared. Those writings have now been published in a memoir titled “The Light of the World.”

“Writing was actually my feet on the Earth,” she said. “I wouldn’t say it was cathartic or helped move through my grief. It was actually more profoundly about processing the world through art and writing.”

Alexander is professor at Yale University who came to national prominence when she read her poem “Praise Song for the Day” at President Obama’s 2009 inauguration. For many months after Ghebreyesus’ death, Alexander said she couldn’t write any poetry, just the short essays that appear in the book. “It came word by word, always with attention to music. They’re not prose poems, but they’re short. They’re condensed. They have the economy of poetry because that’s how I’m wired.”

When Alexander finally did write a poem, she says it was more therapeutic than poetic. She calls it “Family in Three Quarter Time” and it begins “We are now a three-legged table. A family of three, once a family of four. We bring ourselves into new balance. The table wobbles but it does not fall.”

Alexander says she hopes her memoir will be helpful for others who experience loss, although she says it is not a how-to. “Grief is so singular even as it is universal. We’ve all been through it or we will all come to it. That is the truth. I wouldn’t presume to say ‘I did it this way so you should too.'”

One of the passions that Alexander shared with her husband was food. In addition to being a painter, he was a chef and co-owned an Eritrean restaurant in New Haven. For Alexander, cooking dishes that he loved to prepare for his family is a way to have him back at her table. Here are two of her favorites. 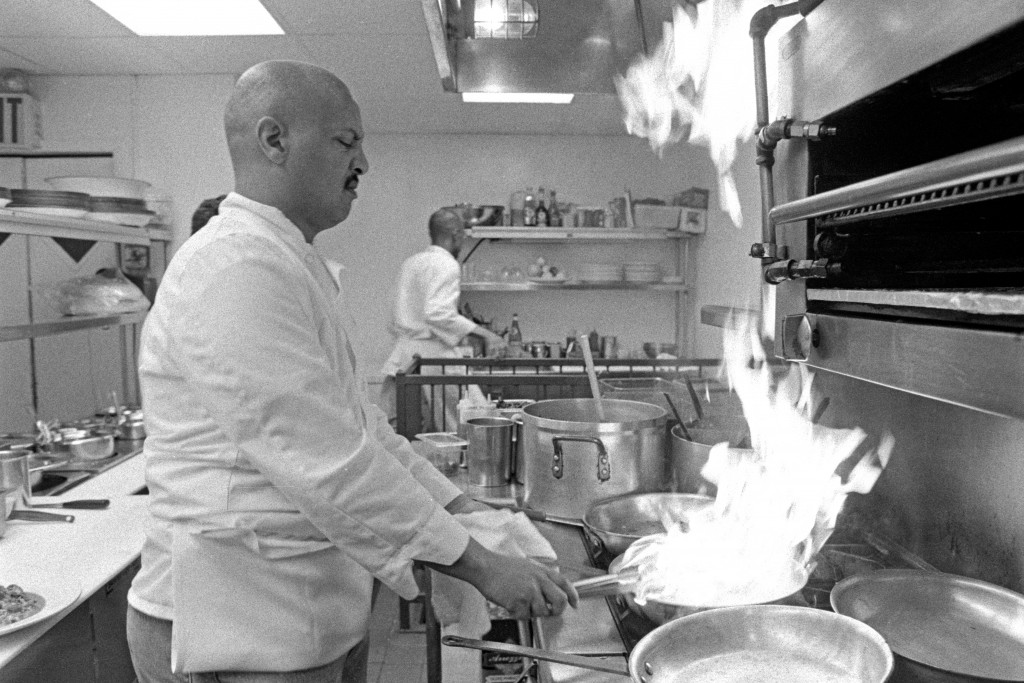 Ficre Ghebreyesus cooks at his restaurant Caffe Adulis in New Haven, Connecticut. Ghebreyesus died unexpectedly in 2012. Below are two of his favorite dishes that he prepared for his family. Photo by Hiroyuki Ito/Getty Images

1. In a large heavy pot combine the first 6 ingredients and enough water to cover the vegetables by about a half inch. Allow stock to simmer for 4 hours.

2. After the stock has been simmering for about an hour, you’ll want to start making the tomato curry sauce. Combine the tomato passata, 2 chopped carrots, 3 cloves chopped garlic, and the spices in another large heavy pot and allow to simmer 3 hours.

3. Add lentils to tomato curry sauce and let simmer 20-30 minutes more, adding stock as needed to thin it out (about 2-3 cups). The mixture should be thick and creamy, not soupy or dry.

4. Stir in fresh cilantro and remove from heat. Season with salt to taste. Serve lentils with basmati rice.

*Tomato Passata is similar to tomato sauce and can be found at many specialty food stores. If you can’t find passata, you may substitute tomato sauce or crushed tomatoes.

Spaghetti with a Hundred Onions (not really!)

1. Cut pancetta into ¼-inch dice — you should have 1 cup — and put them in a large saute pan with 3 tablespoons of olive oil. Cook gently until the pancetta beings to brown.

2. Meanwhile slice onions thinly — but not too thinly. When the pancetta has begun to brown, add the onions to the pan, salt and pepper them, and turn them several times in the oil. Put a lid on the pan, turn the heat as low as it will go and cook for 40 minutes or so.

3. While the onions are cooking, bring a big pot of water to a boil, add salt (2 teaspoons). When your sauce is almost done, add your spaghetti to the water and cook al dente. (Really al dente. You want it to bite back. It’ll cook more in the sauce). Drain the pasta and add to the sauce with whatever water is clinging to it. Add more pasta-pot water to the pasta and sauce if need be.

4. At the last minute, add chopped parsley and grated Parmesan cheese to the pasta and toss. Serve in a heated bowl and pass more cheese at the table. This is the best dish!! It’ll make you want to throw rocks at other pasta dishes.