The question everybody has about the novel ‘The Power’

Our March pick for the PBS NewsHour-New York Times book club, “Now Read This” is Naomi Alderman’s sci-fi novel “The Power.” Become a member of the book club by joining our Facebook group, or by signing up to our newsletter. Learn more about the book club here. 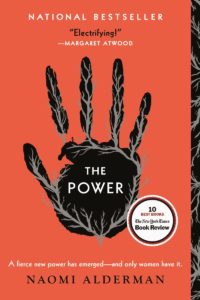 In “The Power,” British writer Naomi Alderman explores what happens if women all across the world suddenly developed a superpower that could be used for good or ill. After getting the power, many women change. In the case of Allie Montgomery-Taylor, she transforms from a vulnerable and abused girl into a powerful and influential religious figure called Mother Eve. Throughout the book, Allie is guided by an inner voice that Alderman doesn’t ever explain.

Below, Alderman addresses the burning question that many of our book club members have had, and that many readers have asked her: What’s the deal with the voice? In her words:

A few instructions for becoming the Messiah

One of the questions I most frequently get from readers of “The Power” is the following: “What’s the deal with Allie and The Voice anyway? Is that voice God, or is it some response to trauma?” To which I reply: Yes, that’s a great question.

I don’t propose to answer it. Being Jewish, I’m less interested in straight belief than I am in what and how people do the things they do. I don’t know how actual messiahs end up that way, and I think it’d be presumptuous of me to suggest that they definitely are, or definitely aren’t, what people say they are. What people say about you is – as we’re discovering through social media – often more significant than whatever “the truth” ever was.

Having said that, if you did want to be the Messiah and you happened to be a young woman who could electrocute people at will, here are a few things to bear in mind:

Is a fairly well-documented effect where, let’s say two people in the middle of a traumatic event where they still need to think logically to survive believe that there was a third person with them helping and giving advice… who then turns out not to have been there at all. It could just be one person, escaping from a burning building, who hears the voice of a “firefighter” guiding them to safety but it turns out there was no firefighter anywhere near them. Or two people caught in a shipwreck who are helped by a third man who reminds them that there will be a bubble of air trapped under that overturned rowboat and if they dive down they’ll be able to breathe.

I can’t say I’m much interested in hectoring to one group or another about what they ought to make of that phenomenon.

Placebo is weirder than you think. It’s not just that a comforting word will make you feel better so you care about your pain less. No, placebo can sometimes be used as medicine. It measurably affects very tangible things such as wound-healing time. It works better the more dramatic the intervention – so injecting someone with plain water four times a day works better than giving them a sugar pill once a week, even though both of those treatments have literally no active ingredient. Not only that, placebo works even if you know that what you’re being given has no effect. [But note, as far as anyone knows, placebos cannot treat many serious conditions, for example, cancer.]

The mind and the body are not completely separate organisms. The one affects the other. If you believe you’re going to get better, if something very dramatic has happened to you like being given an electric treatment by a supposed messiah live onstage, you might actually get better.

3. Muscles are controlled by electric impulses

This one is pretty specific to women with skeins (have you felt yours coming in yet? Is it humming? Place your hand to your collarbone… feel it?) but electric eels do a bunch of weird things that we haven’t fully understood yet. One is that they can send out a jolt of electricity through the water that will make a prey-fish’s muscles contract. Well of course, because nerves and muscles obey electrical signals. If we could control that electricity extremely accurately, if we could pinpoint precisely the right signal to send to a previously paralysed muscle… maybe we could actually heal someone. Who knows?