This band wants to take ‘rez metal’ beyond the Navajo Nation

Glam metal. Death metal. Doom metal. Space metal. Since heavy metal music emerged in the late ‘60s and early ‘70s, with its intense, massive sound, countless subgenres have sprung up, united only by their dissonance, edginess and creativity. “Rez metal,” the latest to gain mainstream traction, comes from the Navajo Nation in the American Southwest.

The community of rez metal bands is largely DIY, meaning they often play where they can — a parking lot, say — and with whatever equipment they can haul or rent. The musicians sometimes span multiple generations in a single band. Their influences are Metallica, Iron Maiden and each other. They perform on and around the Navajo reservation, high desert land that stretches across more than 17 million acres in Arizona, Utah and New Mexico.

Darius Yazzie, the 26-year-old frontman of the rez metal band Testify, said that on the reservation, the community deals with problems like isolation, lack of access to jobs and education, and addiction, “and we take it out on our instruments.” 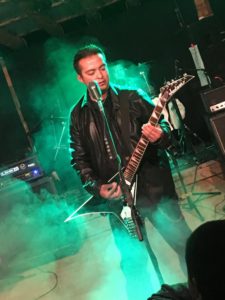 “The music is a positive way of releasing negative energy,” he said.

Testify is a four-man group (including Yazzie’s father) based in Thoreau, New Mexico, a small community on the eastern edge of the Navajo Nation.

For decades, bands like Testify had been largely underground, but their music has become more visible. More rez metal is popping up on streaming services, more bands are touring — and metalheads are paying attention.

The PBS NewsHour spoke to Yazzie about how he came to metal music, why the genre of rez metal is growing, and what the music means to his fans.

This conversation has been edited lightly for length and clarity.

How did you first get exposed to metal music?

I was introduced to it through my dad, who was already a full-time drummer for another band. I was only 10 years old at the time. Seeing him playing drums with this band he was in — to me it was really appealing and inspiring. I tried doing drums but didn’t get it down, so I moved to guitar. It became clear to — to just play. 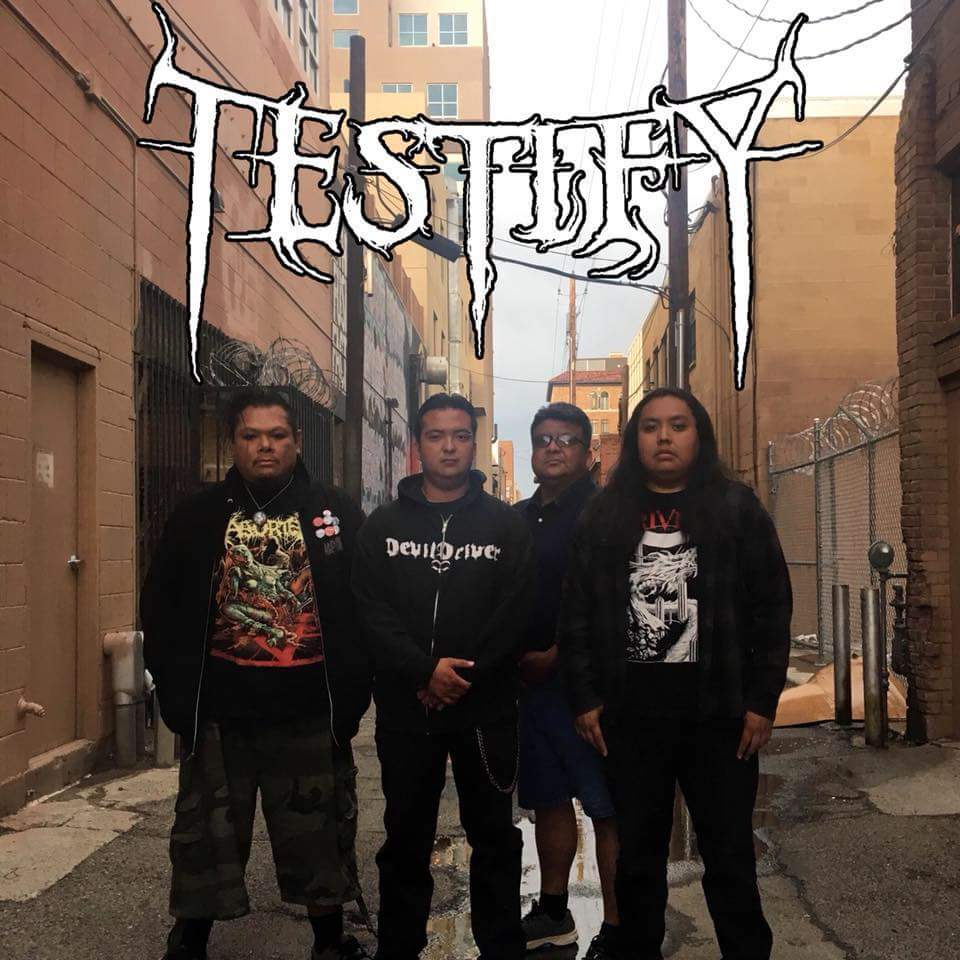 I started off playing cover songs: Metallica and Iron Maiden. As I got older, it was a challenge to write my own music, so that’s what I did. My dad was not playing for a band at the time, so I said, “Do you want to start playing with the music that I have?” His style is really different than mine. His is ‘80s metal. Mine is of the newer generation. So it’s really cool Testify’s music is two generations combined into one.

What is “rez metal”?

Rez metal is a one-of-a-kind sound that you don’t hear on the radio or much on YouTube or anywhere else but the rez. It’s very obvious, very loud — a very distinctive sound. Some bands use that powwow rhythm and traditional songs and mix that into their metal songs. I personally haven’t done that. Others write about our culture and heritage lyrically. The band Ethnic De Generation, in the song “Bloodland,” the singer talks Navajo during the bridge. And the band Testament, in their song “Native Blood.” The lead singer is Native, and in the video there is a tribal dance in the beginning. It’s really awesome when bands combine the culture into the music.

Can you talk about the DIY aspect of this music?

A few times we’ve done shows in a small storage place, with four or five bands on the bill, and I’m running sound for all the bands. Recently, we did a show where we rented out a venue but they didn’t have a sound system so we packed up the trailer, got the PA packed up, and another band helped out with the lights.

We deal with everyday problems, and we take it out on our instruments.

My dad has a humongous generator, and we’ve used that a few times. We do an annual summer show out in Window Rock, Arizona, out in front of a parking lot. And when a show happens around the rez, most of the time it’s only 30 minutes, so you’ve got to fit as much as you can in those 30 minutes. With Testify, we go out guns blazing, because we want people to remember and have a good time. We deal with everyday problems, and we take it out on our instruments.

What about metal music appeals to you, and appeals to the rez? What are some of the everyday problems that you’re working out through your music?

There’s not much community involvement here in the area. Jobs are scarce. Hard for some individuals to get into school. We’re in such an isolated area. But music brings people together.

We recently played at a middle school for their field day. I was nervous about what their reaction would be. But two or three songs into our set, they were going nuts. The teacher came up to us and said, for the first time, kids who were separated, because of bullying, were mixed in with the rest of them. It’s cool to know that the music brought everyone together. There’s also a lot of cases of domestics — drinking — around our area, because there’s not much to do. There’s been a few close family members of mine that got really hooked on it. They were at the top and now almost at rock bottom. I’d say drinking is like an insect on the area, one of those things you can’t get rid of. But at our shows I say no drugs, no alcohol during the show, to our band members. Because we’re here to play the music.

“The music is a positive way of releasing negative energy.”

I think the music is a positive way of releasing negative energy. Being there, at a live show, you’re there in it. You’re yelling, you’re singing along, some people are moshing. All that aggression you have, it’s a healthy way of releasing it. You’re interacting with the musicians on stage. For myself, being on stage, we want to feel that whatever our fan base, if someone’s having a bad day, we want them to feel better after our show. We really establish that connection with our fans, to let them know they’re not alone.

You guys started in 2011, out of a personal tragedy. Can you talk about that?

In our area, Theroux, there were several suicide victims and one was a good friend of mine and of [another band member] David’s. At the time, I was about 18 or 19 years old, and she took her own life. I was like, “Wow, someone has to do something.” We have a little local community center and we played a few suicide awareness shows. To say: “You’re not alone, you’re not by yourself.” Knock on wood, things have been pretty quiet so far recently. But we’re not going to stop telling kids, “We’re here.” With my wife, Candace, we work with the kids at the local church, and teenagers come in, and they’re raising kids at home because mom’s drinking, dad’s not in the picture. Really upsetting to note that. We just try to be there for that. The funny thing is, the majority of them connect through music. We want music to be a medicine for them to go to.

Testify’s message has been really positive from the start. Has your sound and subject matter changed over time?

David and I are the main songwriters of the band. Lyrically it’s more our past experiences, our life experiences. Our first record was dedicated to others. We wrote “Codes of Honor” for our veterans, which is about what it means to serve. We did a “hard” version and acoustic version, and we’ve had veterans come up to us and say how much it means.

There’s also a song called “Move On” based on: If you lose a loved one, this is how you get through. The second record was: This is what I’ve been through, this is how I’ve gotten through it. We’re working on a third album right now, and [it] is really aggressive. On the new album we have a song called “Here We Stand,” which is a political view on everything that’s been happening for the past few years. It’s heavy, punching, driving, excited for people to hear it. We’ve played it loud a few times. People said, “Wow, you took a turn in your songwriting, we didn’t expect to hear that from you guys.” We’re not scared to step out of our comfort zone.

Where can people find rez metal?

Arizona has the big bands of the metal scene. But New Mexico is coming up pretty fast. We also host a tour called “Reservation Slaughter,” where we hit up the small rural towns on the rez. We’ve done that three times, and looking at doing it again next year.

When you play a big city, like Phoenix or Albuquerque, New Mexico, it’s common for them, that there is a metal show happening. When it comes to playing on the rez, like Zuni or Crownpoint, a metal show doesn’t really happen there, so it’s fun because you don’t know what to expect. You could have a low turnout, or a big turnout, and have one of the best shows of the year. It’s kind of a gamble, going to these small towns. Majority of the time it’s a positive outcome. People don’t know us but they know each other, and it becomes a big gathering for everyone.

Who are some of your favorite rez metal bands?

For older stuff, I really like Ethnic De Generation, and their song “Bloodland.” For newer, Born of Winter, and Under Exile.

What else do you want people to know about you, and about rez metal?

I want people to know that we’re here and we’re always going to be here. Even if it’s not our full-time gig. I’m a bus driver in Theroux. I’m getting my degree in teaching. Our drummer, my dad, is an elected official for our community. He serves five chapters. David is out right now in Kansas City working a part-time job. The bass player is a head chef at Denny’s. I wish this could be full-time, but still, we’re here. We travel 200 miles for a 30-minute gig for no pay. Because it’s about the music.

And I want people to know that rez metal is coming up, that every month and every year we get closer, and these bands get closer, to getting with a major record label. Someday those people will say: “Let’s get some of these bands on to our label, let’s go scouting on the rez.” And that would be pretty awesome.