One year after the first travel ban, artists from affected countries share their stories

Ifrah Mansour was barely eight years old when her family fled war-torn Somalia in 1998 and arrived in the United States.

She vividly remembers walking till her feet hurt and hiding in the bushes, but said she was too young to grasp the severity of the situation, leaving her with a disconnect from her family’s most traumatic experience. Now, the Minneapolis-based elementary teacher and performance artist is reconstructing her childhood memories by learning and writing about the Somali refugee experience.

“It’s almost like completing a memory,” she said. “I am learning and relearning the strength of my family, my people, and refugees.”

Mansour’s work is now on display at “Before We Were Banned,” a group art show at the ArtHelix gallery in Brooklyn. It celebrates the work and experience of artists who trace their lineage to the seven Muslim-majority countries – Iran, Iraq, Libya, Somalia, Syria, Sudan and Yemen – whose citizens were temporarily banned from entering the United States in early 2017 under President Donald Trump’s original executive order, or as the show’s curators call it, “Muslim Ban 1.0.”

A year later, after a series of court challenges, the third version of the ban, signed last September, is currently in effect. Unlike its predecessors, the order indefinitely bans the entry of some nationals who are not permanent residents of the U.S. from six Muslim-majority countries — Chad, Iran, Libya, Somalia, Syria and Yemen — along with North Korea and select government officials from Venezuela. A Supreme Court ruling on the order is expected in June.

For immigrants from these countries and their descendants, the ban is an ongoing hurdle in building a home away from home. 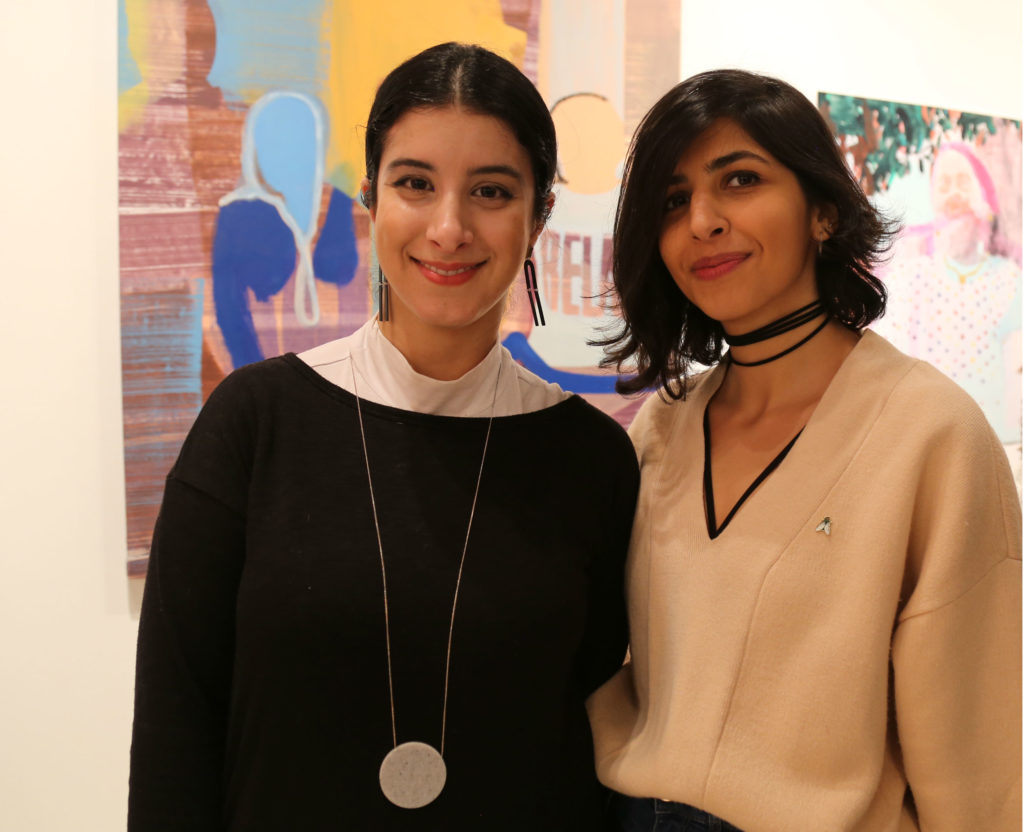 Kiana Pirouz and Mahya Soltani co-curated “Before We Were Banned” in Brooklyn, New York. Photo by Pavni Mittal

“What we wanted to do was build a community,” said Kiana Pirouz, who moved to the U.S. from Iran when she was three years old. A New York-based marketing executive and artist, she co-curated the show with Mahya Soltani, who she met on Instagram.

On Jan. 27, 2017, hours after Trump signed the executive order, Pirouz protested the first version of the ban at John F. Kennedy Airport, an experience that she says changed her life. “We wanted to honor that weekend and give people a better memory than a sad one of an anniversary,” she said.

For Pirouz and Soltani, the ban epitomized the long-standing Islamophobia and discrimination faced by many immigrant groups in the U.S. The duo started planning the show last summer and spread an open call for artists on social media. Participating artists were required to have a connection to the seven countries and current residency in the U.S.

“We didn’t want to advertise this as the art of banned countries. It’s not. It’s stories of individuals,” said Soltani, an MFA student at the School of Visual Arts, who moved to New York from Tehran barely four months before the first ban. “We are just giving people the platform to express themselves and tell their own narrative.”

Following the executive order, as thousands took to the streets across the U.S., UK and Germany to protest the ban, Mansour channeled her despair into “I am a Refugee,” a poem that she said stood in contrast to to the angry reactions around her. Last November she released a video of herself narrating the poem, intercut with images of immigrants from around the world to highlight the shared experience of displacement by refugees. 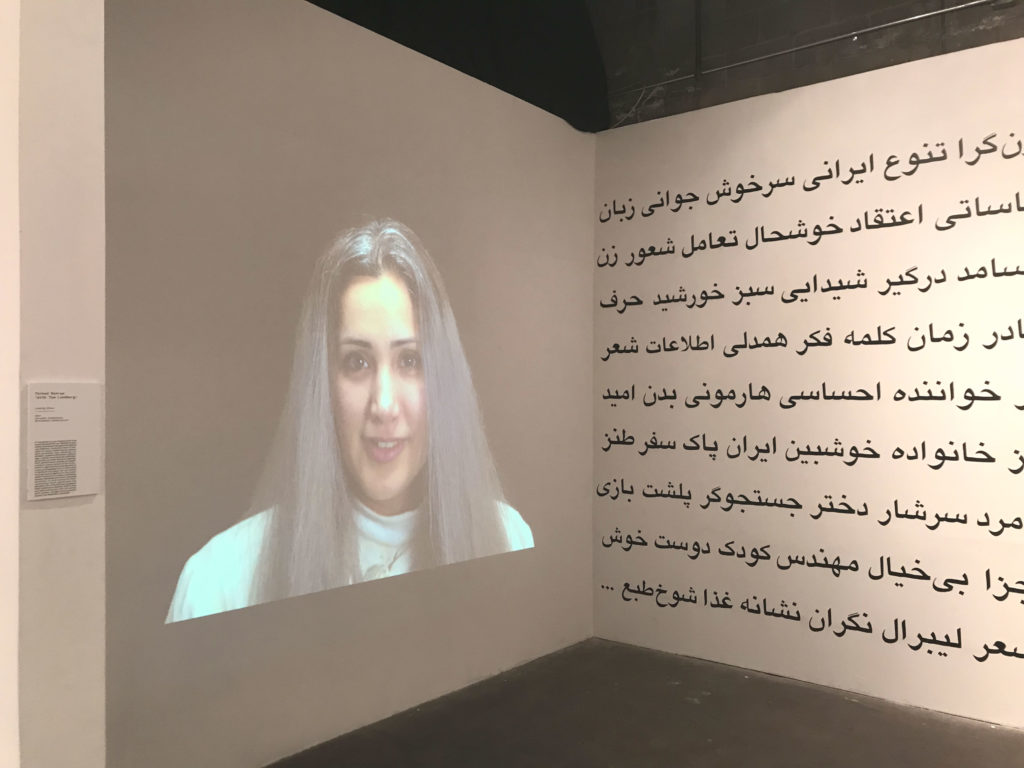 Artist Farhad Bahram created an installation for “Before We Were Banned,” an art show in Brooklyn, New York. Photo by Pavni Mittal

For Farhad Bahram, maintaining ties – cultural and otherwise – to his homeland has been his biggest challenge since he enrolled at San Francisco Art Institute in 2011 for an MFA in photography. A photojournalist from Tehran, he was arrested while covering the 2009 uprising and police confiscated his equipment. He currently resides with his wife in Eugene, Oregon, where he teaches art at the University of Oregon. 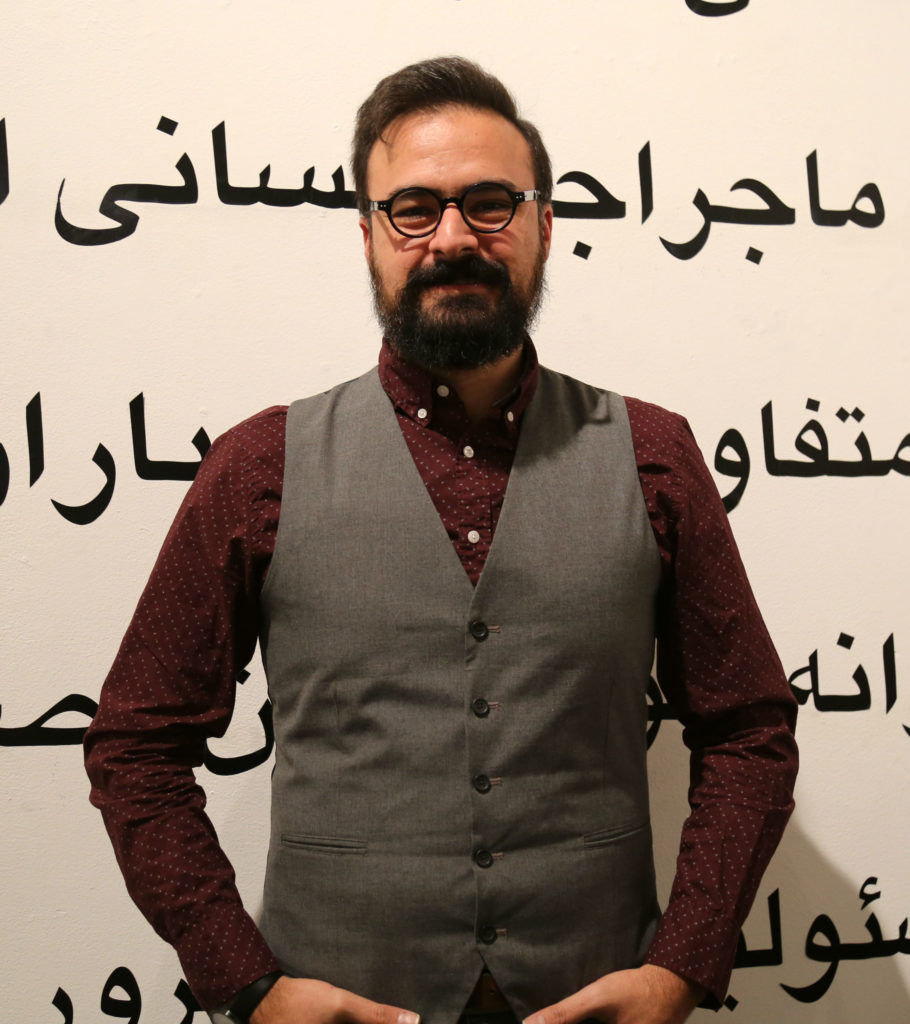 Artist Farhad Bahram appears at “Before We Were Banned,” an art show in Brooklyn, New York, on Jan. 26, 2018. Photo by Pavni Mittal

Bahram, who has visited Iran once in the past seven years, explores the complexity of social and political identity through his work, and in particular the effect of Iranian government surveillance and censorship on communication.

His installation at “Before We Were Banned” consists of two adjacent walls covered with incomplete phrases and words like “home” and “immigration” in Farsi, with a silent video projection on a third wall showing a series of faces with varied expressions and reactions to those words. The piece is an expression of broken language and disjointed communication, encouraging the viewer to connect with people they can’t completely understand and cannot reduce to a label, Bahram said.

The piece challenges the audience to “accept their presence and identity without knowing what they’re talking about,” he said. 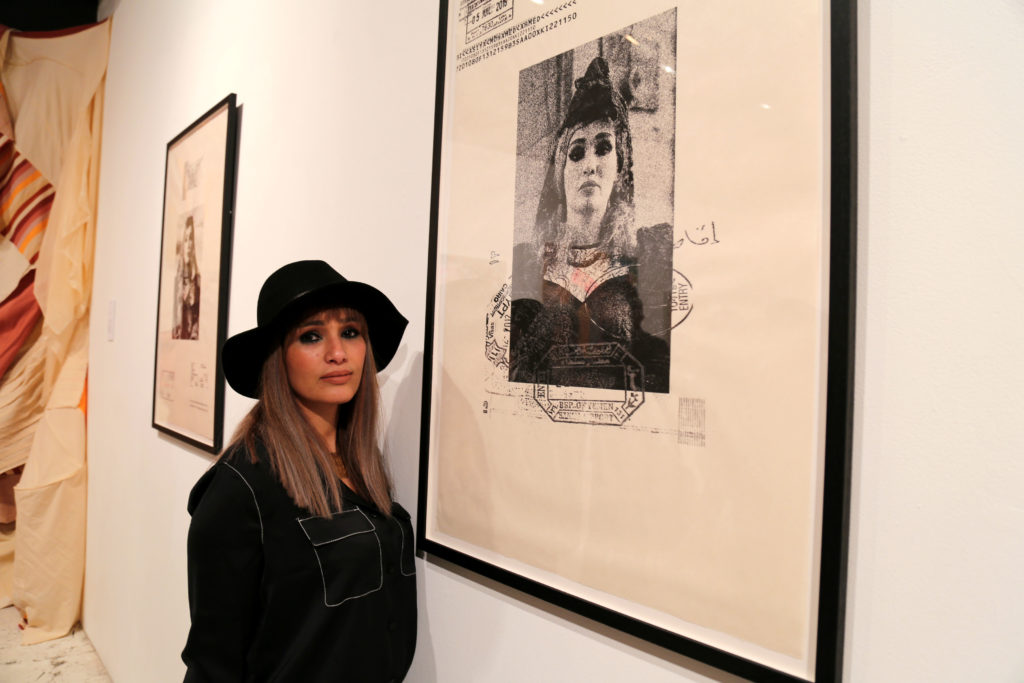 Artist Asiya al-Sharabi appears with her work displayed at “Before We Were Banned” in Brooklyn, New York, on Jan. 26, 2018. Photo by Pavni Mittal

At a young age, Asiya al-Sharabi harboured aspirations of becoming a famous artist, a dream she knew was nearly impossible to achieve in the conservative society of Sana’a, Yemen. Challenging social norms, she started taking photographs of women in her studio while camouflaging their identities, since taking pictures of women is a taboo in her home country.

In 2011, the Arab Spring engulfed the region and al-Sharabi soon fled to Egypt. In 2013, she arrived in the U.S. with her husband and two children for a visit and decided to stay amid a military coup in Egypt.

After hearing Trump promise to ban Muslim immigration to the U.S. during his presidential campaign in 2016, she did something she once considered unthinkable: she took a self-portrait, wearing clothes and accessories she brought from Yemen that mostly belonged to her mother. It was the first of a series of nine self-portraits called “Trumperie,” which documents the experience of being an immigrant living in fear of deportation. After her passport was stamped with “Denied” when she tried to take a flight to Canada last year to attend a show where she was exhibiting, she added those airport stamps to her portraits. Three of her self-portraits were displayed at the exhibit.

As the war in Yemen — which the United Nations has called the worst humanitarian crisis in the world — continues, al-Sharabi says her family doesn’t feel accepted anywhere, and going home is not an option.

“I feel like we are living in a big prison. You keep thinking about the future. What will it look like in ten years?” she asked.

Left: Ifrah Mansour appears in a video for her poem, "I am a Refugee."