Our January pick for Now Read This, the PBS NewsHour’s book club with The New York Times, is Jia Tolentino’s “Trick Mirror: Reflections on Self-Delusion,” a collection of nine essays examining American life under late capitalism. 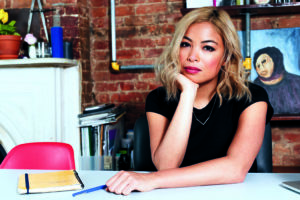 Tolentino, who is a staff writer at The New Yorker, has been called a “millennial Susan Sontag.” Her cultural criticism draws heavily on the internet and the myriad ways it shapes our lives; in “Trick Mirror,” she considers not only how the rise of social media has affected our identities, but also how it has ramped up the pressure women feel to present “ideal” versions of themselves on these platforms. She also writes about religion, scammer culture and feminism in the post-#MeToo era.

Woven through many of Tolentino’s essays is a recognition of just how hard it is to opt out of capitalism now that it is easier than ever to participate in it. “I have felt so many times that the choice of this era is to be destroyed or to morally compromise ourselves in order to be functional — to be wrecked, or to be functional for reasons that contribute to the wreck,” Tolentino writes in one essay.

The New York Times Book Review called “Trick Mirror” a “a cri de coeur from a writer who has been forced to revise her youthful belief in American institutions.” Tolentino “writes with an inimitable mix of force, lyricism and internet-honed humor,” reviewer Maggie Doherty wrote. “She is the only writer I’ve read who can incorporate meme-speak into her prose without losing face.”

“Trick Mirror” was a 2020 finalist for the PEN/Diamonstein-Spielvogel Award for the Art of the Essay and was named a notable book by The New York Times in 2018. Tolentino will answer reader questions about her essays at the end of the month. We hope you’ll read along.