When the first case of COVID-19 was confirmed in Carroll County, Tennessee, the local library shut its doors within a half-hour of the announcement.

Jennifer Thornton, director of the Carroll County Library, initially saw the closure as a silver lining for her tiny staff of three. There would be more time now to do some much-needed inventory of their materials.

But just because Carroll County Library has been closed to foot traffic since March, it doesn’t mean the librarians aren’t still engaging and supporting the public.

Like so many other services, libraries around the country have had to quickly adapt to the shutdowns and distancing measures put in place as a result of the coronavirus pandemic, but also to figure out how to reach the most vulnerable members of their communities under the new restrictions.

In Carroll Country, people are using the new curbside book pickup, set up by Thornton’s staff in response to the virus. Community members can also still access critical digital services, like WiFi, in light of the economic downturn.

When one regular was suddenly laid off from her job, she turned to the library and its staff for help applying for unemployment benefits online. She only had a mobile device, and she was having trouble completing her application on the state’s website. “She was truly worried. And you could tell. There was a legitimate fear there,” Thornton said.

Thornton and her staff put on gloves and masks and helped the woman troubleshoot the process on her phone with her, all the while remaining 6 feet apart from one another. They helped her figure out her password and where to find answers to her questions about applying for benefits, and the woman was able to submit her application.

“We were able to perfectly remain socially distant, and she is currently receiving her unemployment now,” Thornton said.

But like businesses affected by the pandemic, librarians also have to worry about their bottom line, and some fear that funding cuts this year could affect their ability to serve these patrons in the future.

Some 21 million people in the U.S. live without a broadband internet connection, 30 percent of whom are in rural areas. Many librarians working in rural counties say that the “digital divide” — the disparity in internet access among individuals of different demographics and socioeconomic status — has been even more apparent in their communities since the coronavirus outbreak began.

“The digital divide hits very hard for vulnerable communities” that live paycheck to paycheck “and may not have the resources to pay for high speed internet in their homes or for a computer,” said Ramiro Salazar, director of the San Antonio Public Library and president of the Public Library Association. Salazar said he recently received a request from San Antonio city leadership to reopen their facilities with social distancing measures in place so members of the community can use WiFi and public computers, in light of the digital divide there.

In Story City, Iowa, many of the Bertha Bartlett Public Library’s patrons have typically relied on the space for a variety of resources, from filing their taxes to getting set up with their new digital devices. Director Kolleen Taylor joked that her library is a sort of “free Best Buy” for the community. She said that they have set up an extra WiFi channel that’s not password protected and has a range that extends 30 to 50 feet away from the building. Taylor said people will sit in their cars or on a bench outside the library for hours to use it.

“We know we’re more than books, but I think a lot of times people really don’t truly understand all the facets that a library plays in a community.”

After the Story City library shut its doors for social distancing measures, they set up an emergency computer station in a separate building right next door, in case patrons need WiFi to address economic concerns, such as checking on tax refunds or applying for benefits.

Amid nationwide shutdown orders, patrons across the country are unable to check out physical books from the library. So many libraries have scrambled to ramp up their digital offerings in recent weeks.

While patrons of the William B. Harlan Memorial Library in Tompkinsville, Kentucky, can use curbside pickup to check out physical books, director Monica Edwards said they’ve also made a more concerted effort to train staff on using social media. The point is to get the word out about the services they continue to offer. They started a social media challenge asking senior high school students to share videos describing how they’re feeling about missing out on the rituals that most teens typically get to experience.

Edwards said many graduating seniors in her library’s small town have submitted poignant videos about being unable to participate in the Senior Walk, where they visit their former elementary schools and say goodbye to their teachers.

Edwards added that her library plans to archive all the material they’ve gotten from the seniors in their genealogy room. “In our little county, this is making history,” she said.

The Tompkinsville librarian acknowledged that there is, broadly, an inherent contradiction in efforts to ramp up digital outreach to communities while a stark digital divide remains for people of lower incomes in both urban and rural areas. Without WiFi, many patrons can’t access a public library’s online services. That’s why Edwards’ library is currently working to purchase modems to drive out to remote areas — either with their mobile library or another form of transportation — so that patrons in the vicinity have a signal to access their services.

“You have to create ways that people can access the internet,” Edwards said. “It is a contradiction, but it’s what our world is right now.”

At the same time, increasing digital access isn’t a substitute for all the ways librarians help people when they’re allowed to gather. Kolleen Taylor said that when patrons are “forced” to go online for all the services the library usually provides, “we’re leaving out a big portion of our communities all across the country. Not everybody is going to be a computer nerd. Not everybody’s keeping up with technology.”

She said her staff has spent a considerable amount of time with older people teaching them how to download and use e-books, and she still worries that without ongoing connections at the library, elderly patrons aren’t getting a lot of opportunity to stimulate their minds outside of the ongoing crisis.

In some bigger cities, librarians are being deployed to aid in coronavirus response efforts. San Francisco librarians, for example, are currently being trained to help with the city’s contact tracing effort. A number of libraries with 3D printers have started making face shields and other personal protective equipment for health workers. And in San Antonio, libraries are working with the housing department to provide support for their coronavirus response, according to Salazar.

Many of the 173 staff members from the Rochester Public Library in Minnesota have taken on new roles since the space closed under the state’s stay-at-home order. Library director Audrey Betcher now serves as a section chief of Health and Human Services, running a day center for the city’s homeless population that was set up in response to the coronavirus.

Betcher’s staff also manages a COVID-19 hotline, directing calls to various county workers who field questions from the public about the virus. 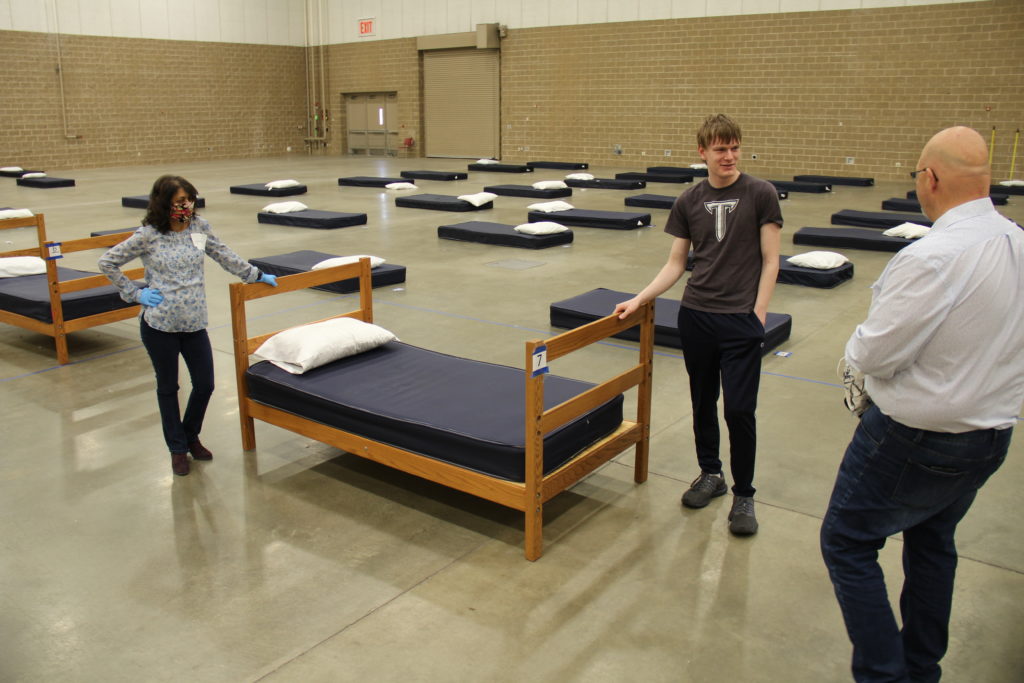 “I joke that that’s one thing I didn’t learn in library school,” Betcher said. Nonetheless, she said her staff knows a lot of people who have come through the day center for the homeless. Betcher said they were prepared to take on the work.

“I love that the library has really led the way on this. We need to serve our most vulnerable,” she added.

Many libraries have continued to offer emergency meals to patrons, even with their facilities closed. Carroll County Library partnered with Second Harvest Food Bank of Middle Tennessee to serve as a pickup site for food.

“We know we’re more than books, but I think a lot of times people really don’t truly understand all the facets that a library plays in a community,” said Carroll County director Jennifer Thornton. “It’s truly the last safe haven — you don’t get that a lot.”

Librarians know that once their facilities do re-open, they will have to adapt to a different reality, working in and with communities whose needs are different than they were at the beginning of this year.

When it comes to coronavirus-related anxieties, many librarians said funding was at the top of their list.

With the economy taking a significant hit during the pandemic, many city and county governments will be bringing in less tax revenue this year than they did in previous years. Ramiro Salazar said that San Antonio is projecting an $80 million shortfall. That means the library will likely have to rethink its budget. 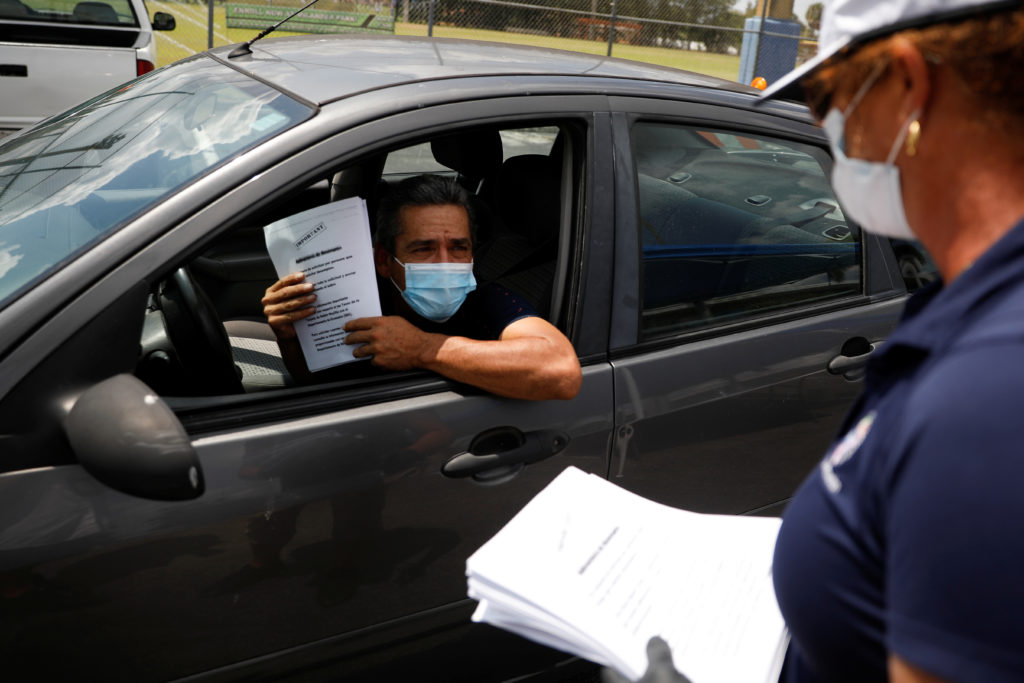 A man speaks with a library worker after receiving an unemployment form in Hialeah, Florida, on April 8, 2020. Photo by REUTERS/ Marco Bello

“Unfortunately, in spite of the great value of what libraries provide to the community, we’re concerned they will be one of the first services to be impacted by any reduction in services by city or county governments,” Salazar said. “So we’re very, very fearful for the future.”

Even as libraries feel pressure to invest in converting more of their services to digital, they worry about being able to keep their staff employed full-time next year. Most said they’ll cut other services before they lay off employees. “Since this all started, nobody’s been getting any sleep. You worry about your staff and morale,” said Monica Edwards, director of the library in Tomkinsville, Kentucky.

Already, libraries have had to lay off or furlough their staff due to the COVID-19 outbreak. Callan Bignoli, who directs the library at the Franklin W. Olin College of Engineering in Boston, has been tracking these developments and tweeting about the issue using the hashtag #ProtectLibraryWorkers. She estimates that about 150 libraries in the U.S. and Canada have laid off or furloughed staff thus far, affecting thousands of library workers.

While many librarians are expecting to have to readjust their services due to funding cuts next year, some say that for now they’re just trying to get used to working in a space where no one is reading or checking out books like they used to.

“It’s sad. If you work in the library field, the books sitting on the shelf are like your babies,” said Story City librarian Kolleen Taylor.

“It’s so quiet, it’s abnormal,” she said of her library, which would have seen about 100 visitors a day. Now, she’s processing returned books when there are no other staff members — or members of the community — present. They sit unused on the shelves or in a decontamination area where they’ve been cleaned with clorox wipes and lysol fumes.

It’s a picture that would’ve been unimaginable at the end of last year, but became the new normal for libraries following the coronavirus outbreak. Taylor and others hope it’s temporary, but in the meantime, there are plenty of ways to lend guidance and hope.