Jacinda Martinez makes clothes that aren’t built to last. In the spring of 2009, she swapped out stilettos and sewing shears for garden boots and loppers. Martinez, now a gardener by day, haute couture designer by night, crafts intricate dresses out of what she grows in her garden, to try to send a message about the fleeting nature of food and fashion.

She knots and weaves vines together to make a top, drapes wilted lettuce and radicchio at the waist to form a skirt, finds vibrant color in broccoli, garlic, cabbage. All of her creations eventually return to the earth. The only evidence that remains is a fine art photograph that is sold or displayed in art shows. 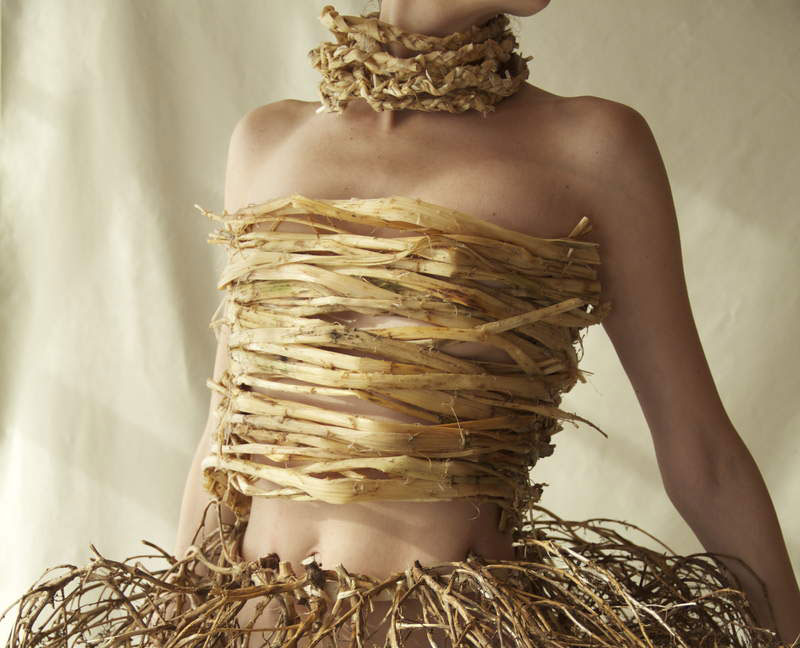 The idea for her fashion line, “Fashion in the Raw,” was first seeded while apprenticing under a Lise Bech, a Danish basket weaver. As she worked on the farm during the day and sat for hours each night, weaving intricate baskets out of willows collected from the farm, Martinez saw the complete life cycle of each item she made.

“You just harvest it, process it, and make it. And then there’s no chemicals involved, so once it is over it will go back to the earth,” she said. That led to Martinez’s current work. Rooted in the tradition of textiles where people were more connected to the garment from harvest to attire, she constructs high-fashion dresses entirely out of vegetable matter.

It started as an exploration in building by hand, though, later evolved into a commentary on the fresh today, expired tomorrow mindset. She hopes her work sends a message about the ephemerality of fashion and how, like vegetables, designs are seasonal and not meant to last. For the apparel industry, that means selling more clothes. For the planet, Martinez’s concern is that that means waste and unsustainability.

Art curator Anna Abaldo, who showed Martinez’s work at the Maine Farmland Trust Gallery in 2016, sees the connection to the trend of “fast fashion.” 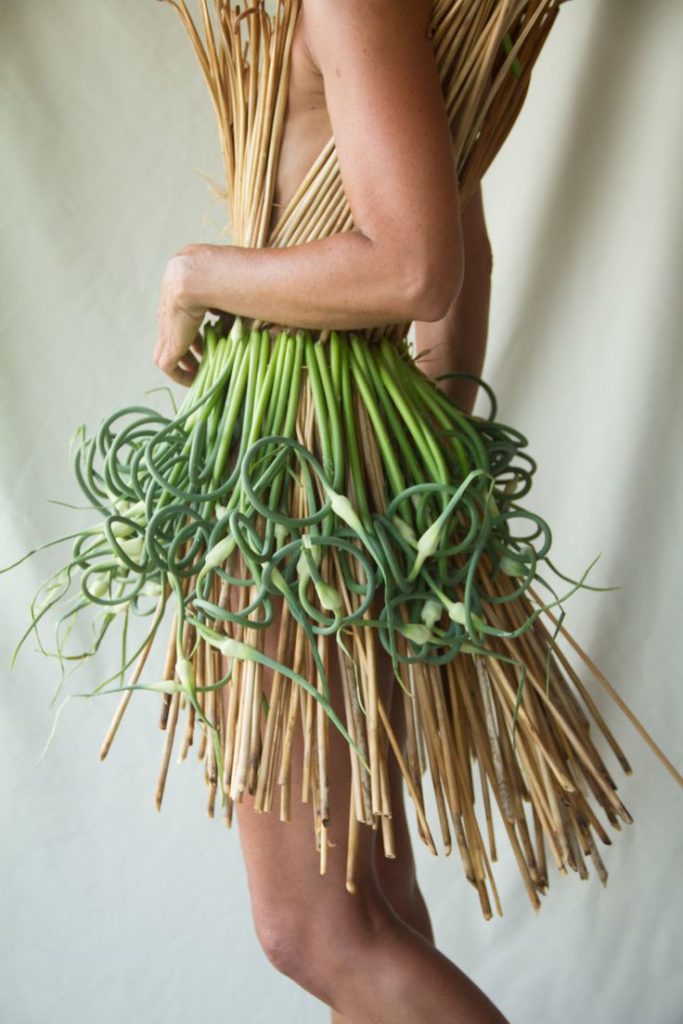 Just a few generations ago, a single item of clothing was worn for decades. Now, with affordable fashion brands like H&M and Forever21, people can cycle through clothing more quickly, keeping up with trends that become obsolete in less than a year.

According to the U.K.-based Waste and Resources Action Program, the clothing industry is the fourth largest polluter, following transportation, housing and food. And the Council for Textile Recycling reports that the average American throws away 70 pounds of clothing and textiles each year.

Martinez says she has become a more sustainably minded consumer over the years because of her work.

“I [felt] a lot of tension between being practical but also indulging in beauty,” she said. Today, she said, she educates herself on the impact of clothing and tries to purchase only sustainably made attire.

Martinez, whose father works in New York City’s garment district and mother owns a fabric store, isn’t the first artist to combine fashion and plant matter. Catherine Latson, a theater scenic painter-turned-studio artist, creates dresses and accessories out of plants, shells and bits of wood. On Project Runway, a reality show where rising fashion designers compete, one unconventional challenge asked participants to make a dress entirely out of flowers. And illustrator Gretchen Roehrs’ fashion sketches, which have drawn more than 80 thousand Instagram fans, use just a few lines and a lot of fruits and vegetables.

But Abaldo said Martinez is different from other designers who have tried this before.

“She is not just some artist from New York who thought it may be a cool idea to create something with vegetables, but she also grew those herself. She isn’t removed from the process,” Abaldo said. 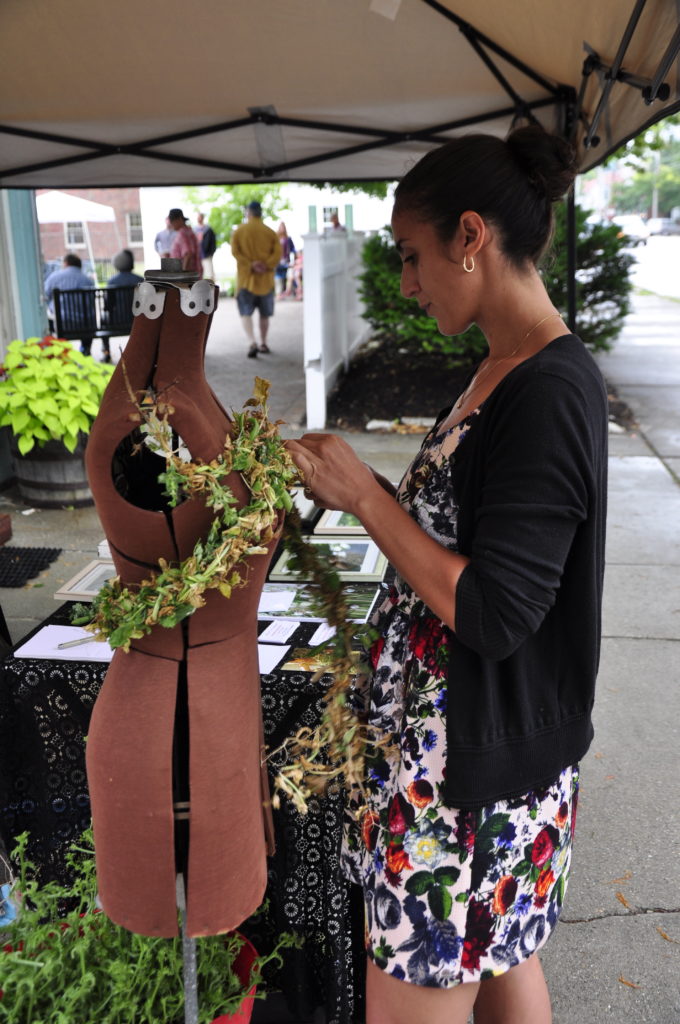 Martinez weaves a sash out of plant material. Photo by Carl Costanzi

Martinez said that without growing food, which she first started doing in a series of farm apprenticeships, she wouldn’t have had the inspiration to create the dresses.

“From seed to cultivating to harvesting, I have this connection with the plants and that’s where I feel like the art and expression really comes out,” Martinez said.

It was a sweet potato bumper crop that inspired her to use vegetables in fashion.

“It almost felt like a sci-fi movie,” she said. “There were all these crazy, crazy long sweet potato tendrils, almost like an octopus.” Martinez says she saw a dress in them.

She spent 30 hours harvesting and then constructing and sewing the heavy dress, her first “Fashion in the Raw” creation.

Martinez has since made over 40 dresses, cultivated from a decade of growing seasons, and learned a few tricks you won’t find in a ‘how-to’ book — like, how long to leave carrots or potatoes in the sun to make them pliable, which she said is “something you only learn when you are trying to sew vegetables.”

Martinez’s ideas for sustainable fashion continue to grow. She is now toying with the idea of bringing consciously harvested nettles, a flowering plant, into the fashion world as a sustainable textile — maybe even making their way into her fashion line.