What do people knead in time of crisis? Bakers remake artworks from a Texas museum

Stuck in their New York apartment during the coronavirus pandemic, roommates Kiara Cobb and Brittany Richmond wanted an time-intensive project, one that combined their loves for art and food.

Cobb thought back to the “meditative experience” she had while in Austin, Texas, inside a chapel-like architectural marvel outside the Blanton Museum of Art. Created by Ellsworth Kelly, the building’s glass windows are designed to let sunlight flood the interior with splashes of color, hitting different areas of wall and floor depending on the time of day.

The two friends agreed to honor the artwork, which is dubbed “Austin,” through baking, turning sweet and savory carrot cake into a mini, edible, building replica. The graphic qualities of Kelly’s monumental artwork — white exterior and colorful glass windows — became buttercream frosting walls and sugar glass geometric shapes. It took about five days to complete, longer to figure out the measurements of converting a 2,715-square-foot building to a 9-inch-by-13-inch pan. 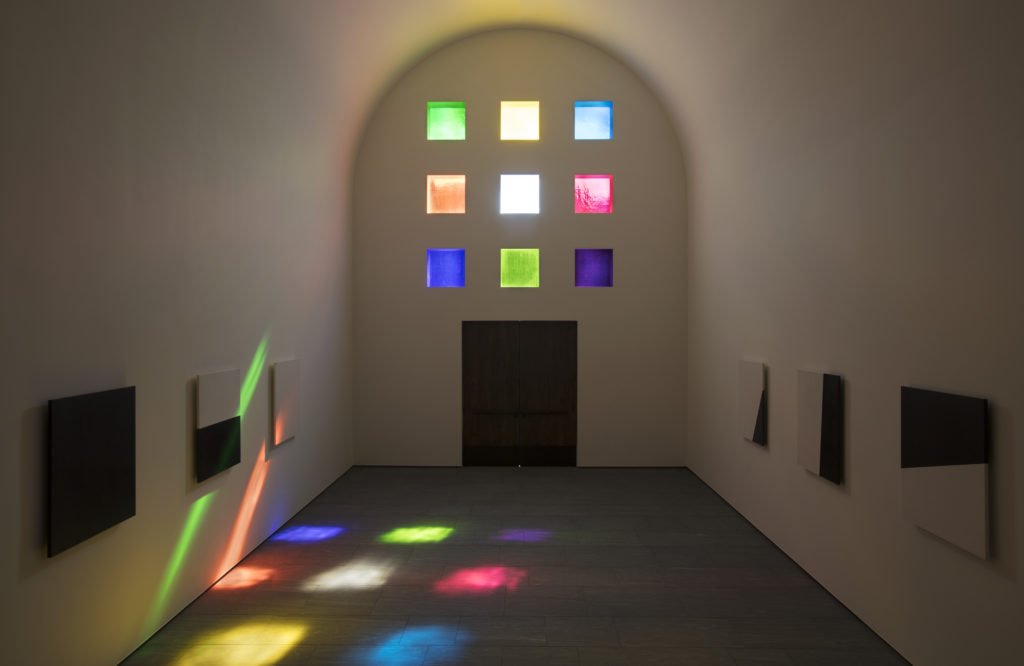 Inside Kelly’s “Austin.” Photo courtesy of Blanton Museum of Art, The University of Texas at Austin and Ellsworth Kelly Foundation.

Thanks in part to the friends’ sweet recreation, the Blanton Museum was inspired to hold a bake-off challenge, calling on people in Austin and beyond to bake something inspired by its art collection. That includes the “Kelly building,” as it’s sometimes known by locals, a signature piece for the city, along with the thousands of Baroque paintings, detailed drawings and Latin American artworks in the museum’s permanent collection.

Did you bake a recreation of an artwork? Share a photo of your tasty art to the NewsHour’s Canvas arts Facebook group here.

Besides Cobb and Richmond’s cake, another participant remade “Austin” into a cookie. There was an angel food cake mimicking Teresita Fernández’s “Stacked Waters,” the blue and white stripes of cast acrylic that adorn the entrance of the museum. A local bakery shaped vanilla sheet cake into “Ñ,” in honor of writer and visual artist Leandro Katz’s examination of the letter.

Cobb, who works in digital advertising, took snapshots of her “Austin” cake as it was being made and when it was cut — a lot of cake for two people alone to eat. 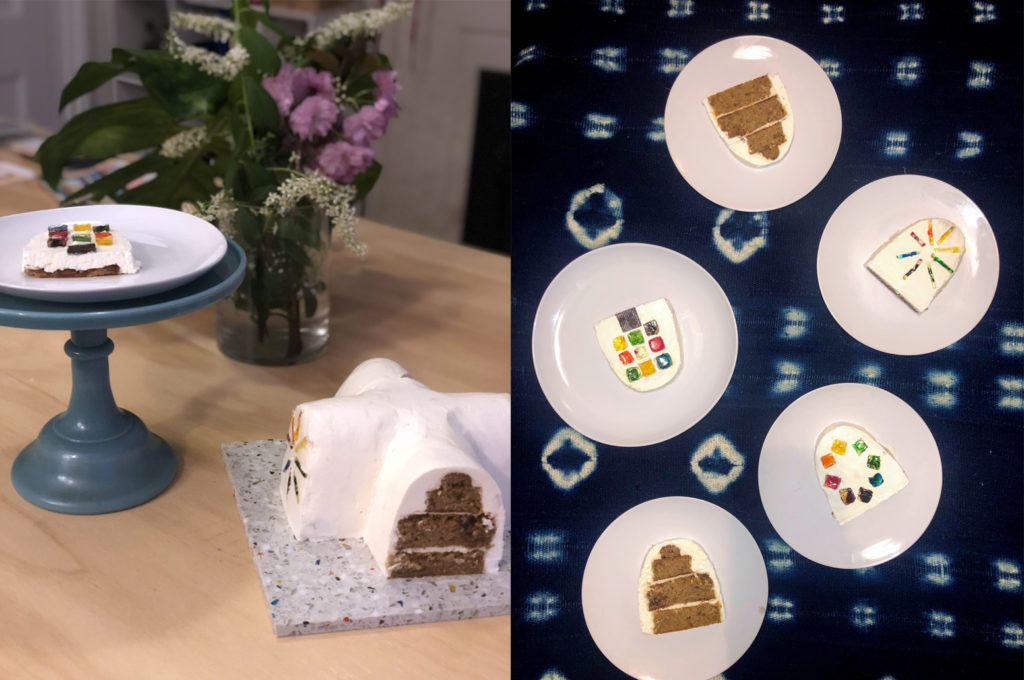 The “Austin” cake recreation sliced up. Photos by Kiara Cobb.

“It was a bummer that we weren’t able to share it with people,” said Richmond, who works at Performa, a nonprofit performance arts organization. She also makes art cookies and gingerbread houses based on architecturally distinct buildings like the Solomon R. Guggenheim Museum in Manhattan. To her, part of the joy of baking is having people taste the finished product.

Instead, the bake-off challenge gave them a chance to share their work with — and be appreciated by — a larger community online.

The bake-off is the latest in a series of at-home projects championed by museums closed during the pandemic that give people something to do while social distancing. It’s also a demonstration of the balm of art during a crisis.

For instance, there’s the museum challenge to recreate artworks from items found inside your home. Toilet paper, disinfectant wipes, and canned goods appeared in many restagings, a marker of the pandemic era and a point of levity.

The #BlantonBakeoff shows how art “gives us a moment to reflect and take time,” said Lizabel Stella, the museum’s social media and digital content manager, adding that it’s the same with baking.

“There’s a slowness to the process that when you really take the time to appreciate what goes into it and how it’s formed, you really come away with something that lasts for a lifetime,” Stella said. However, baked goods do have an expiration date.

On the left is Byron Kim’s “Synecdoche,” 1998. On the right is Abby Gamble’s recreation of the artwork’s 20 panels. Photo courtesy of Blanton Museum of Art, The University of Texas at Austin and the Michener Acquisitions Fund.

Austin resident Abby Gamble spent close to nine hours toasting and broiling pieces of homemade bread to emulate 20 panels of Byron Kim’s “Synecdoche.” The artist’s abstract portrait incorporates a range of skin tones of strangers and friends alike. The artwork, whose title refers to a part of something that represents the whole, is a commentary on race and identity, and echoes another Kelly work.

“Everyone is turning to creativity, whether it’s painting or learning a new instrument or baking or making new music.”

“It’s so beautiful and complex, but it’s so simple,” Gamble said of Kim’s artwork. That simplicity allowed Gamble, who has always turned to baking as a form of therapy, to try to make bread from scratch — a seemingly popular hobby during this period.

“Everyone is turning to creativity, whether it’s painting or learning a new instrument or baking or making new music,” Gamble said.

Not wanting the bread to go to waste, Gamble and her husband ate her creation for dinner one night.

For Cobb, making the cake brought back a flood of memories of when she visited the Kelly building last year around Easter. She remembered it was a sunny day, and noted how the light and colors inside Kelly’s artwork were “shifting like a sundial.” Cobb likened the moving light to a nostalgia hit, a sense memory of the kind of light she saw growing up in Southern California, the same way a scent reminds you of a person.

Richmond hadn’t been inside the building before. But she was familiar with Kelly, an abstract artist known for his experimentation with bold shapes and colors. He died in 2015 at age 92. “Austin,” his first and last architectural work, was completed after his death.

Richmond, who studied art history, said “your brain explodes with references,” like adobe houses seen in Mexico, when looking at the Kelly building. 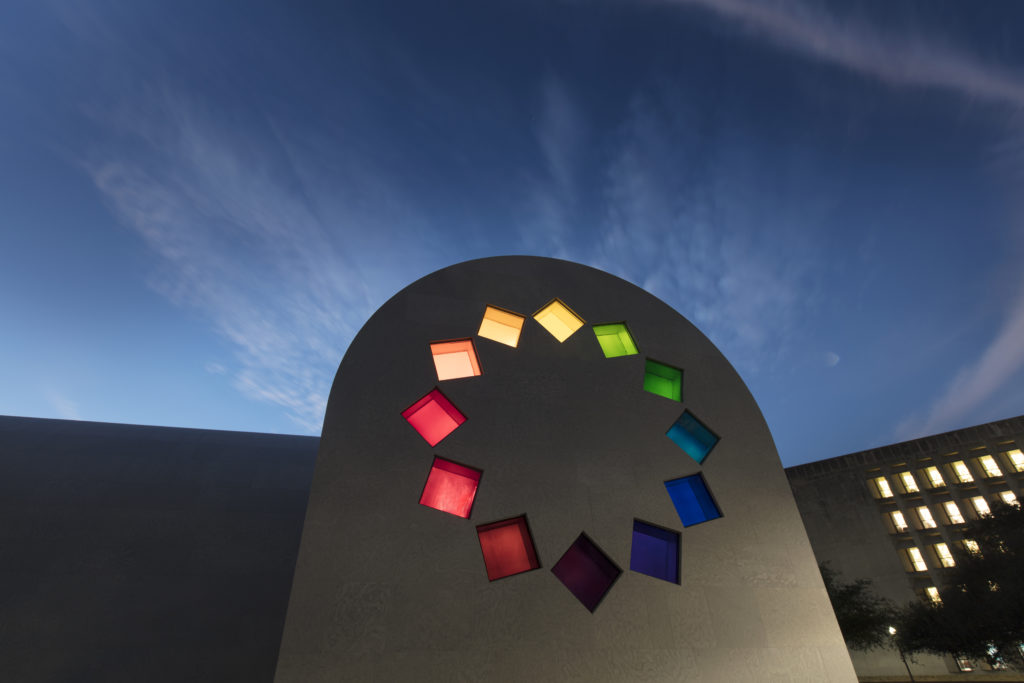 “Austin” at night. Photo courtesy of Blanton Museum of Art, The University of Texas at Austin

The challenge deepens “appreciation for works of art and public spaces — museums and chapels — that are places of congregation for large amounts of people,” Richmond said. “And when we’re not able to be there right now, but you can find them in your own way.”

Cobb said she found it interesting how the Kelly building “takes this concept of religion and faith, and turns it into an experience that’s very much internal.”

The Kelly building is a chapel in spirit. It doesn’t contain specific religion iconography — Jesus Christ doesn’t appear on a cross, for example — but there’s a series of abstract, black-and-white paintings that were inspired by the “Stations of the Cross.” Kelly’s minimalist approach to the building, and its emphasis on light, still creates a calm sanctuary.

In a follow-up conversation, Cobb said there’s a “heightened awareness of ourselves” during the pandemic. When looking at Kelly’s “Austin,” maybe during a more normal time, she said, you may focus on what it has to say about religiosity. Now, you might be thinking about a moment of solace, and see things through a “lens of interiority.”

And “by the way, the interiority is delicious,” Richmond said.

MORE: Famous paintings come to life in these quarantine works of art

Left: A southwest view (L) of Ellsworth Kelly's "Austin," 2015. Two New York roommates made a cake replica of the chapel-like artwork while self-isolating in their apartment. Photo courtesy of Blanton Museum of Art, The University of Texas at Austin and Ellsworth Kelly Foundation. Photo of replica by Kiara Cobb

In this quarantine art challenge, creativity begins at home