Famous paintings come to life in these quarantine works of art

Visiting museums to experience art in person is not an option in the era of social distancing. But that hasn’t stopped people from engaging with — and using their own bodies to recreate — works by Old Masters and contemporary artists alike.

With the encouragement of museums, people have been repurposing the everyday items they have in isolation — toilet paper, cleaning products, canned goods, all materials that have come to signify the crisis — to sub in for the fancy lace collars, exquisite parasols and exotic pets that adorn the history of art.

The call for homemade art appears to have started with a Dutch Instagram account, Tussen Kunst & Quarantaine (or Between Art and Quarantine.) It gained greater traction after the J. Paul Getty Museum in Los Angeles, which is closed as the city follows stay-at-home orders, amplified the challenge with some simple instructions: Choose a work of art, and find three items around your house to recreate it.

During a period when art lovers can’t simply visit a museum or gallery, a new social media phenomenon has arisen as a creative outlet. Participants isolating at home amid the pandemic are encouraged to recreate a prominent work of art using everyday objects. Video by PBS NewsHour

Annelisa Stephan, the museum’s assistant director of digital content, told the PBS NewsHour that there have been, to date, about 30,000 submissions to the challenge. The entries are lessons in art history made flesh, sometimes prodding participants into learning more about a particular artist, period or work of art. For families, it’s a way of turning challenging times into inspiration, and even an outlet for self-expression.

“People are connecting with the shared experience that we’re all having around the world at this very unusual time,” she said. “I think art has a role to play in helping us make sense of this strange time and picking out our favorite art works — and recreating them — has been very powerful.”

Did you recreate an artwork from household items? Share a photo of your recreation to the NewsHour’s Canvas arts Facebook group here.

In that spirit, I reached out to several of the people stuck at home who made old artworks their own, starting with an homage to Frida Kahlo: a self-portrait with different pets — or in this case, many different cleaning products.

Alana Archer, an interior designer in Kelowna, British Columbia, was inspired by the 1941 Kahlo painting “Me and My Parrots,” which shows four colorful parrots perched on the artist’s shoulders and in her lap. The parrots almost act like guard dogs for the Mexican artist, who suffered through years of chronic pain. For her variation on the self-portrait, Archer swapped parrots for a spray bottle and detergent, all of which happened to be green. 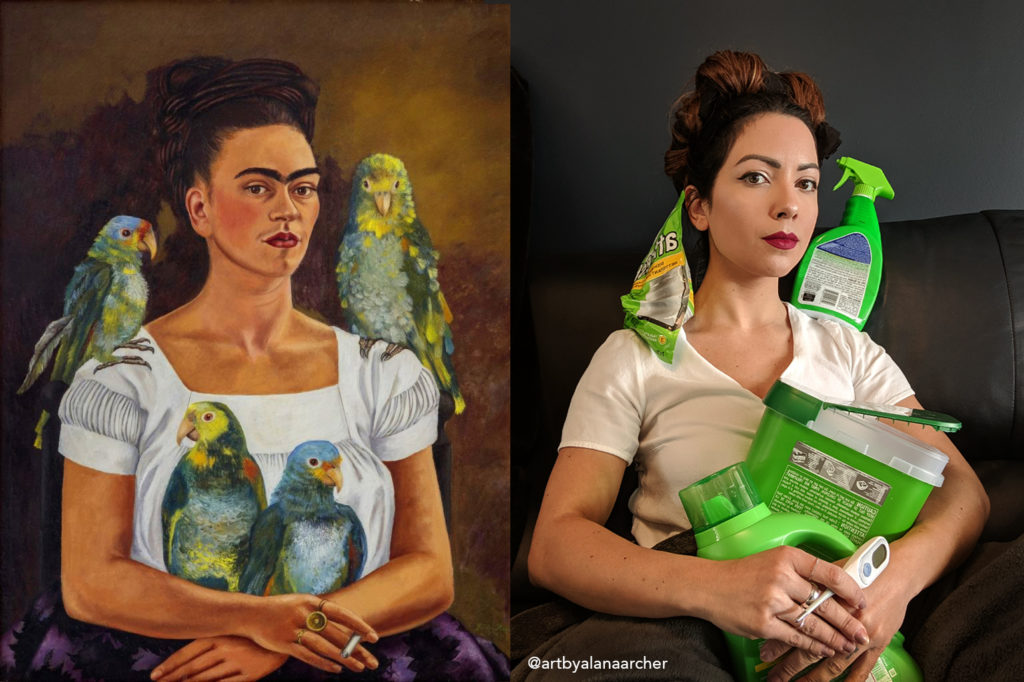 In Frida Kahlo’s 1941 self-portrait “Yo y Mis Pericos,” four parrots are perched on the artist’s shoulders and lap. In Alana Archer’s recreation, cleaning products stand in for the parrots. Painting belongs to Harold H. Stream Collection in New Orleans. Photo by Archer

Archer said she didn’t know much about Kahlo while looking for a portrait for the challenge, but she said she was drawn to this particular painting because of the artist’s posture and expression of her face, which “evoked a sense of calm resilience.”

After more research into Kahlo’s background and style, Archer said she understood more about Kahlo’s life story. “She went through a lot of challenges, and she was extremely strong. She persevered, and actually used art as a way to get herself through things,” Archer said.

There was, however, one iconic thing missing from Archer’s recreation: Kahlo’s unibrow. She said she didn’t initially want to emulate everything about the painting — after all, it was made in about 10 minutes. But Archer has since added her own spin to more works by Kahlo, and incorporated the artist’s most recognizable feature.

Archer, who is currently living with her brother and sister-in-law, said she has turned to art as a coping mechanism. She said the art challenge itself has encouraged people to “express emotions that you don’t necessarily recognize or that are a little bit overwhelming.”

“Being able to express all of these new feelings and frustrations and sadness and [to] embody it in artwork is a very handy tool right now,” she said.

Of the vast number of submissions to the challenge, Archer said that one of her favorites was a recreation of Nicolaes Pickenoy’s 1632 painting “Portrait Of A Young Woman.” In that painting, the woman dons a satin outfit with intricate detailing, including a large pleated collar around her neck. 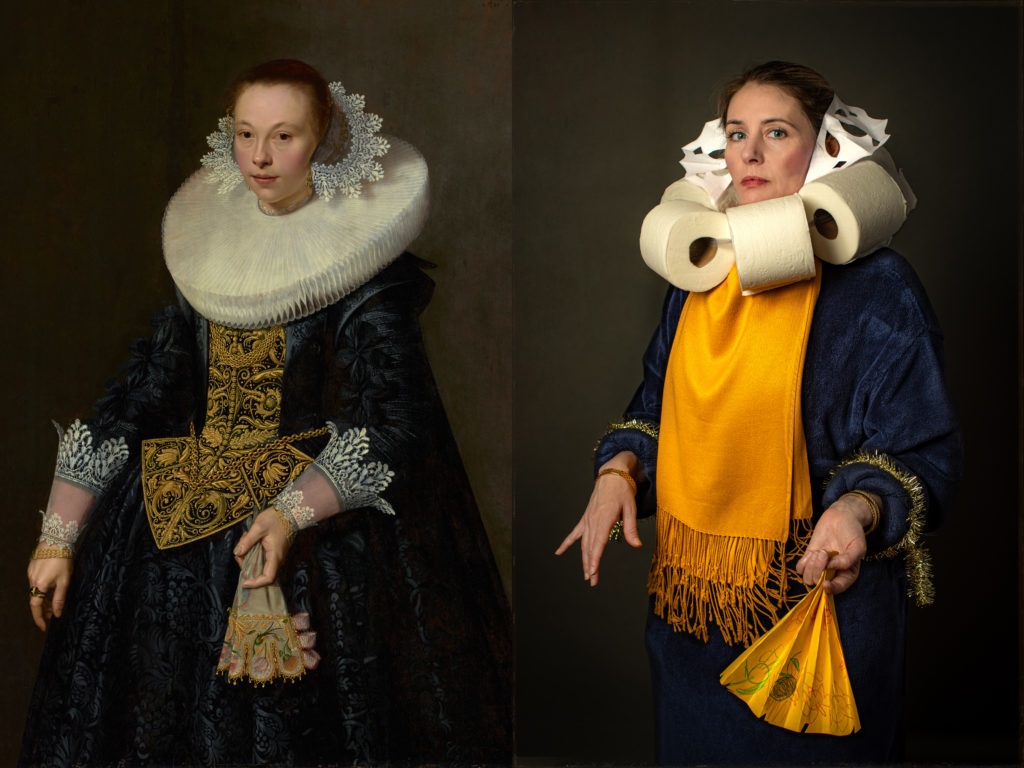 On the left, Nicolaes Pickenoy’s “Portrait Of A Young Woman.” On the right, a recreation of the 1632 painting, with a toilet paper collar. Painting courtesy of J. Paul Getty Museum. Photo recreation by Bryan Beasley

In Bryan Beasley’s rework, his wife, Coco, wears a collar made of toilet paper rolls. To emulate the 17th century costume, Coco wore her husband’s robe backward; a gold scarf stands in for the intricate detailing in the front, with gold tinsel for the cuffs. For the additional accoutrements, Coco holds a paper fan made by her 5-year-old daughter, Layla, who drew on flowers with crayons. Paper cut-outs form the head dress.

Beasley, a professional photographer, has seen his job opportunities dissipate amid stay-at-home orders in Los Angeles. While Coco is working during the day, Beasley is homeschooling Layla, the older of their two daughters. Beasley said the first week that classrooms had to shift online was difficult.

“I definitely had a freak-out the first week,” he said. “[My daughter] doesn’t look at me in the same way that she looks at her teacher, like ‘Oh, this is that person’s job to tell me this.’”

The art challenge gave Beasley a creative outlet to share with his family.

The project “took my mind off everything — not working, not having to be a teacher,” he said.

Layla has also posed for a recreation of Édouard Manet’s “Jeanne (Spring),” utilizing a pastel, knitted blanket draped on an umbrella to mimic the couture look in the painting. Beasley said he plans on working on another recreation that incorporates the whole family.

Beasley said the submission that inspired him to do his own was a rework of Keith Haring’s cover art for a 1992 remix record, which helped raise money and awareness in the fight against HIV/AIDS. The cover had all of Haring’s trademark images: a colorful pop art figure, lines indicating movement, and a big red heart. 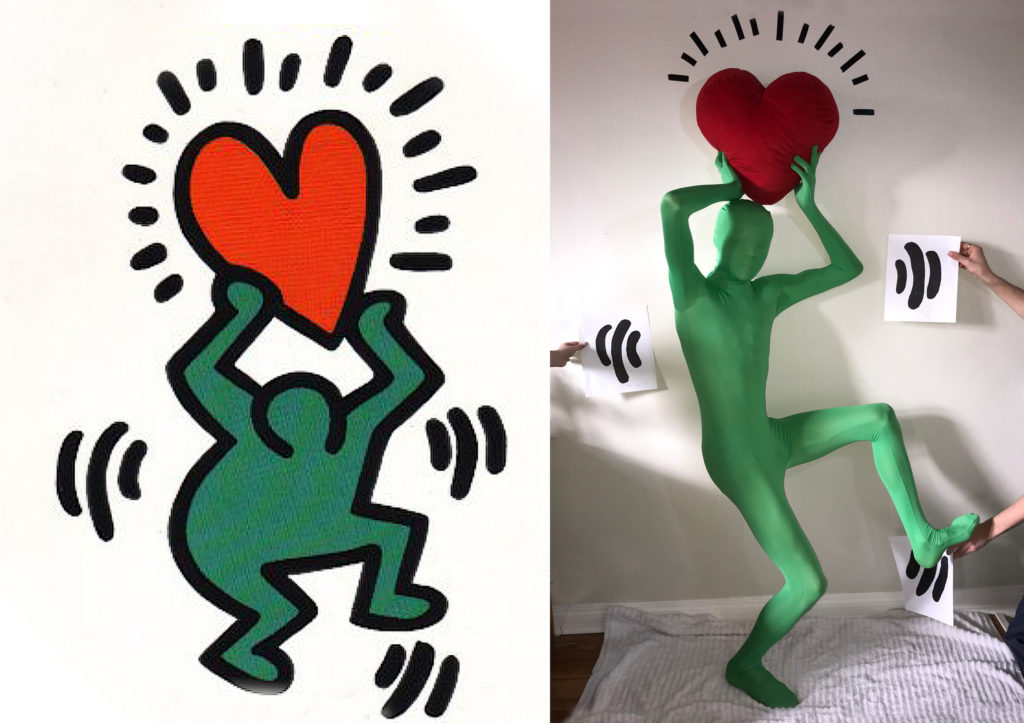 On the left is a Keith Haring cover art image for a 1992 benefit record. On the right is a recreation of the iconic Haring imagery by a family in Vancouver. Haring image belongs to The Keith Haring Estate. Photo by Marian De Gier

In this restaging, someone wears a green bodysuit and holds a red pillow overhead. Hands belonging to people standing out of the frame hold up sheets of paper with the bold, black lines indicating movement as seen in Haring’s image. Beasley wondered if this rework was done by a group of roommates cooped up during the pandemic.

Turns out, the image was a family affair.

Marian De Gier said that she and her husband took an abrupt economic hit as job opportunities dried up.

“The creative industry seems to get hit really quick because part of it is that we’re used to kind of living more month-to-month than other people maybe,” she said. “It’s also the first thing to go. We have a lot of friends who are actors, and they, of course, lost all their employment as well.”

So an art challenge became a perfect outlet for a family of five creatives. De Gier said they recreated several artworks — each of them tailored to one family member’s personality. One son emulated a Kahlo self-portrait that also incorporated animals. The daughter became a reading girl in a Jean-Honoré Fragonard painting. The father became the bushy bearded postman in a Vincent van Gogh. And De Gier herself mimicked the head tilt of a long-necked woman in an Amedeo Modigliani painting. “Always love those languid Modigliani types. Can’t quite stretch my neck to match,” she wrote in her Instagram caption.

MORE: Want something to do? The Dr. Seuss museum has an idea or two

But it was her 15-year-old son, Lukas, who embodied the energy of a Haring artwork. He already owned a green suit and has gone to circus school before. (He’s even ridden a unicycle down the street wearing that green suit.)

“He is a full-on, energetic person that jumps around,” she said. “He’s been trying to plan escape routes out of the house. We make jokes about duct taping him to the wall.”

Lukas’ Haring recreation involved the whole family. The father added the black duct tape on the wall. The other two children are each side of the suited-up Lukas, holding up the movement marks, and De Gier took the picture.

And despite all the uncertainty and anxiety around the pandemic, De Gier said a good counterweight to all of that has been being creative and enjoying each other’s company.

“I really think that those are huge positive parts of this very strange time,” she said.

One submission that caught De Gier’s eye was a humorous take on John William Waterhouse’s 1911 painting “The Charmer.” In the original masterwork, the woman in the painting charms the fish in the water, at her feet, with a lyre. In the recreation, a mustachioed man is charming five shampoo bottles at his feet. 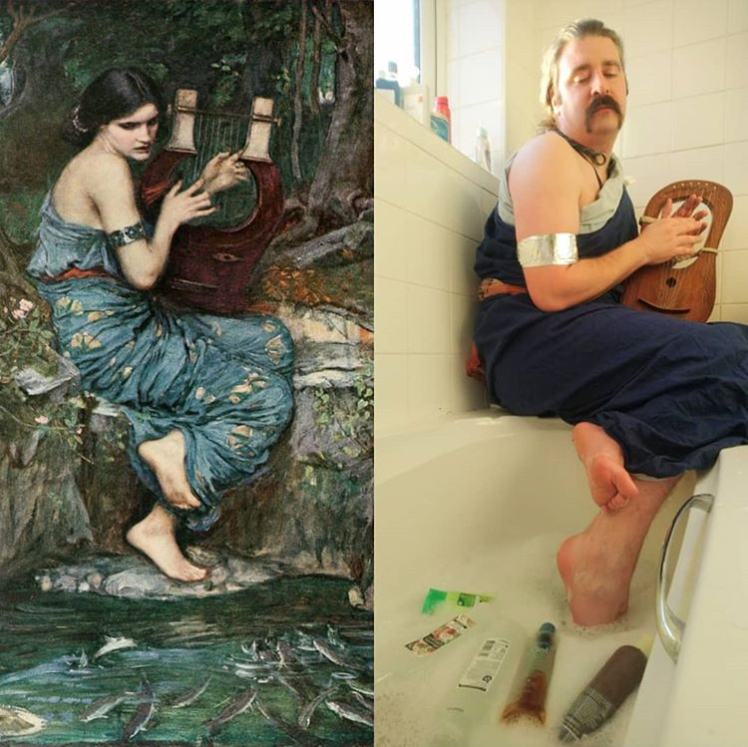 Musician Drustan Durman, who owns a lyre, poses for a recreation (R) of John William Waterhouse’s 1911 painting “The Charmer.” Photo by Nicole Stanfield

The lyre in the recreation isn’t made from reused cardboard from some Amazon order. It’s an actual lyre that belongs to singer and musician Drustan Durman, who’s been staying with his girlfriend, Nicole Stanfield, in Taunton, England.

Durman has a copy of “The Charmer” on his wall. And a few months back, Durman said he was playing the lyre underneath that picture and had his foot tucked in the same position as the woman in the painting.

“I had my laptop open with the painting and I’m like, “Look like her face! Look down. Look charming.”

So when the couple were thinking of which artwork to bring to life, that memory came back. With a bed sheet and some foil for the arm cuff, Stanfield, who took the photo, said it didn’t take too long to make.

“I had my laptop open with the painting, and I’m like, “Look like her face! Look down. Look charming,” Stanfield said, laughing.

Stanfield is a second-year nursing student, and she’s signed up to work in the field through a voluntary registry. She’s now waiting to be called up to possibly assist front-line staff.

Durman said he’s unable to work from home because he works for a company that provides support to ambulances. Though there are a few other people in the building, he said he doesn’t see anyone face-to-face.

“We’re trying to stay sane, really,” Stanfield said. “I’ve done more social media interaction in the past few weeks than I have in my entire life.”

“I think the normal has just flown out the window,” she added.

MORE: 19 immersive museum exhibits you can visit from your couch

Accentuating the positive with #SongsOfComfort