Affordable fashion brand Forever 21’s decision to file for bankruptcy and shutter hundreds of its stores has resurrected the notion that online retailing is killing old-fashioned brick-and-mortar retailing.

Some are suggesting the strong growth of e-commerce – coupled with slow sales at physical stores – portends the doom of traditional retailing. No more mom and pop hardware stores, no more independent bookstores, no more shopping malls.

Since 2004, I have studied the economics of retailing, from big-box retailing to online shopping platforms. I believe there are limits to what e-commerce can upend. Here are three advantages physical stores still have over their online-only rivals.

Even with the promise of same-day delivery, e-tailers like Amazon will never be able to deliver fast enough or satisfy many consumer needs.

More broadly, consumers often want to touch, feel or try a product before making a purchase.

Need a battery for your child’s new toy? A shot of caffeine? Convenience stores always seem to be either around the corner from home or along the interstate. As such, they are strategically located in places where consumers want to take immediate possession. For evidence, look no further than the strategy of 7-Eleven, which has been expanding and opening new stores, particularly in urban areas where there is more foot traffic and on-the-go consumers.

Remember Peapod.com? Online food and beverage sales have been around since the early 2000s, yet Americans still buy 98% of their groceries offline. One way to explain this is that there is simply no substitute for physically inspecting the produce or trusting that the refrigerated products will arrive unspoiled.

More broadly, consumers often want to touch, feel or try a product before making a purchase. 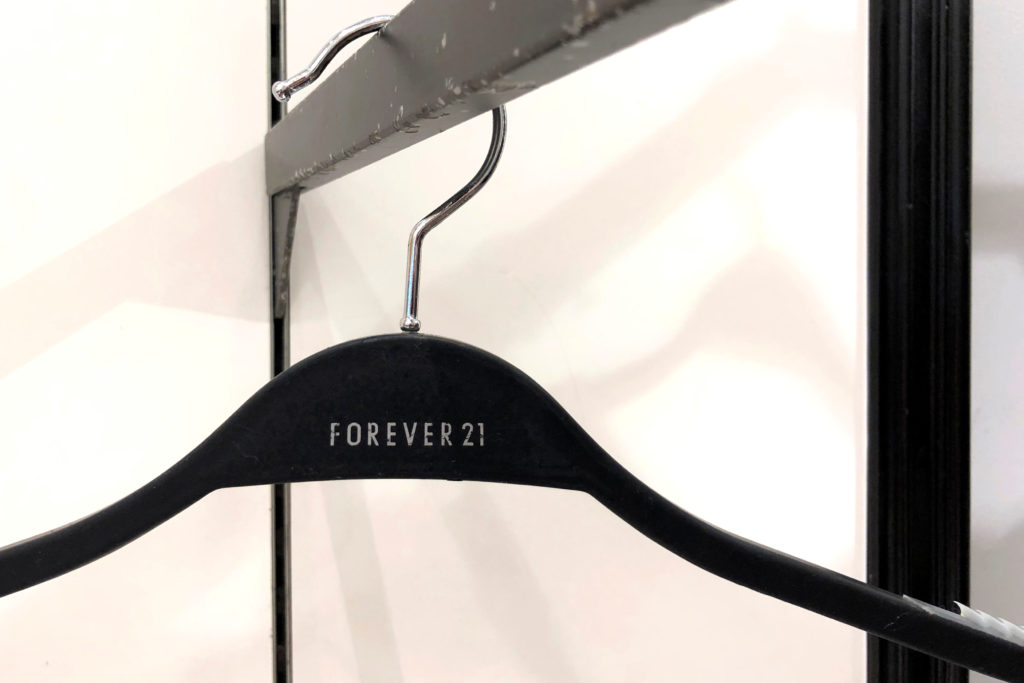 An empty clothes hanger hangs from a rack at a Forever 21 fashion retail store at the King of Prussia mall in Pennsylvania on September 30, 2019. Photo by Mark Makela/Reuters

Best of both worlds

In some ways, the same can be said for apparel. It is hard for many of us to know whether we like a new pair of pants or blouse until we’ve tried it on.

But unlike the grocery business, this is an area where online retailers have a distinct advantage because they’ve made it easy for consumers to order a shirt off the internet, try it at home and then send it back if it’s not quite right.

That’s why online apparel sales are surging and made up more than a third of all clothing sold in the U.S. in 2018. It’s not just online-only retailers that are cashing in, however.

Traditional brands like Banana Republic, J. Crew and Uniqlo have been successful at incorporating an online presence with their physical stores. An advantage they have over newer online brands is that consumers already know and trust them. The combination allows the customers to view and inspect new seasonal products in the store and follow up with online purchases.

A related trend in upscale apparel retailing is the store with no inventory. Department store chain Nordstrom, for example, created a line of “showroom stores” that focus on providing patrons with fashion advice, store pickup and even help with dry cleaning. For Nordstrom, the abundance of online competitors is seen as a competitive advantage because many consumers are looking for a respite from the overwhelming number of fashion choices out there.

Socializing at the mall

The outlook for the traditional shopping mall, however, remains bleak.

Vacancy rates at regional shopping centers reached 9.3% earlier this year, the highest rate in about eight years. Analysts expect one out of four malls to close by 2022.

But just because people are buying more stuff online doesn’t mean they don’t enjoy the social experience of shopping at a mall. And this is an area where e-commerce can’t compete.

To exploit this advantage, today’s most profitable malls have rebranded themselves as “lifestyle centers” in order to convey that they are places to experience a part of life – not just to buy things.

An early visionary of this trend was The Grove in Los Angeles, currently one of the most profitable malls in the country. It was built in the 2000s just as e-commerce was picking up speed, and has thrived even as online retail has dominated.

The flipside of the lifestyle center is the outlet mall, which sells brand-name fashion at deep discounts. Their occupancy rate is about 98%. Since they’re often located far from the city, branded manufacturers can set “deals” for bargain hunters without harming their cachet at urban, flagship locations.

There is no doubt that online shopping is convenient. But these retail trends show that there are factors other than convenience that drive consumer choices.

For Forever 21, it probably came down to the simple fact that fashion trend cycles can be cruel – especially to brands targeting mall-strolling teens. The retailer did the best it could blending bricks and online, but it clearly wasn’t enough.

While some traditional retailers will survive the “retail apocalypse,” many will not.

Anthony Dukes is a professor of marketing at the University of Southern California. This article was originally published in The Conversation. Read the original article.

Anthony Dukes is a professor of marketing at the University of Southern California.