LORDSTOWN, Ohio — Voters in industrial northeast Ohio have not forgotten a particular promise President Donald Trump made when he visited the region soon after taking office. Manufacturing jobs are “all coming back,” Trump said. “Don’t move. Don’t sell your house.”

“He lied,” said Trish Amato, who worked at a General Motors plant in the area that stopped production earlier this year. “He told everybody it’s all coming back,” said Amato. “It’s not. It’s harder and harder to find a job.”

Amato, who voted for Trump in 2016 but is having misgivings about supporting him next year, is one of hundreds of workers at the Lordstown plant who lost their jobs, and in many cases sold their homes and left the region, since Trump’s speech in Youngstown in mid-2017.

Trump’s economic promises helped him carry Ohio in 2016, and the economy will be a major factor in next year’s presidential race. But as voters in this critical swing state state turn their attention to the 2020 election, many say they’re increasingly frustrated with Trump’s record on economic issues, including his trade policy and attacks on organized labor.

‘He told everybody it’s all coming back. It’s not. It’s harder and harder to find a job.’

The unemployment rate in Ohio has dropped from 5.2 percent when Trump took office to 4.1 percent in August, according to the state’s latest labor statistics, mirroring the national trend. The manufacturing, mining and construction sectors all added jobs initially under Trump. But growth has slowed this year in the type of blue-collar industries Trump championed as a candidate, and his trade war with China has created growing business uncertainty in the agriculture sector, which has long powered Ohio’s economy.

Democrats seized on Trump’s economic record at the primary debate Tuesday in Westerville, Ohio. Pete Buttigieg, the mayor of South Bend, Indiana, argued Trump had failed to produce results for the Midwestern states that helped put him in the White House.

Buttigieg also struck a nerve for many Ohioans by singling out the auto plant in Lordstown, calling it “one more symbol of the broken promises that this president has made to workers.”

The plant has been a frequent topic of conversation in labor and business circles in Ohio in recent months, and gained national attention after Trump waded into the fight earlier this year. 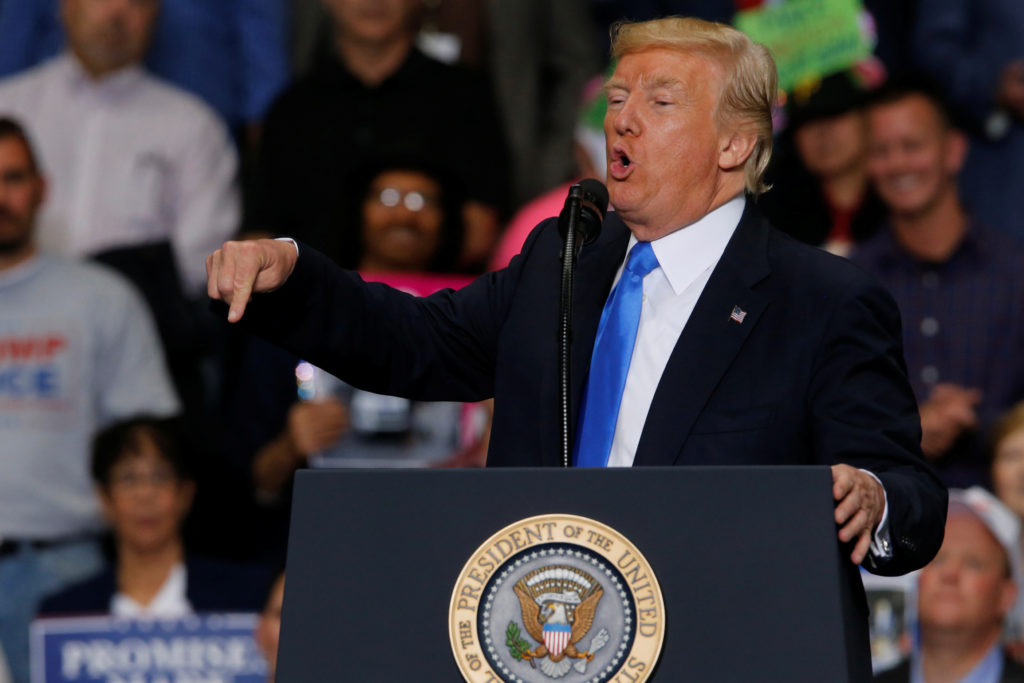 President Donald Trump, pictured at a rally in Youngstown, Ohio, on July 25, 2017. At the event Trump promised workers in the region that manufacturing jobs were “all coming back.” File photo by REUTERS/Jonathan Ernst

The Lordstown plant, which produced GM’s signature small car, the Chevrolet Cruze, employed roughly 4,500 workers on three shifts when Trump became president. General Motors cut the number of shifts down to two and then one before announcing in November that it would end production at the plant altogether in early 2019. The last Cruzes rolled off the assembly line in early March.

Approximately two-thirds of the plant’s remaining 1,500 workers accepted offers to relocate to other GM plants of the company’s choosing around the country. The rest of the workers, many of whom had grown up in northeast Ohio and spent decades at the plant in Lordstown, opted not to relocate and as a result lost their benefits, including health care coverage.

Workers who were offered new jobs at plants in places like Wentzville, Missouri and Bowling Green, Kentucky, were given as little as eight days to accept the offers, according to multiple relocation letters shared with the PBS NewsHour.

The decision to stay or go was agonizing.

In a back office of the United Auto Workers Local 1112 union hall, Calvin Ball, who had shown up to go over some paperwork, said that he opted to accept a relocation to Arlington, Texas, because he could not afford to stop working at 62 years old. Ball, a lifelong resident of Warren, Ohio, said he was nervous about moving so far away from his children and grandchildren.

“I’ve never gone this far from home. Never. You think I want to go to Texas?” he said.

Others chose to stay in the Lordstown area and enroll in vocational school instead. But several are worried they will not be able to find jobs that pay as much as GM or offer similar benefits.

“It’s not something I would have chosen to do, at age 42, going back to school,” said Melinda Minor, who is in a training program to become a facilities manager. Minor stopped to discuss her job prospects while picketing Monday in front of the plant, where union members have been striking for weeks as part of a nationwide labor stoppage.

A spokesperson for General Motors declined to comment on the company’s plans for the Lordstown plant, citing GM’s ongoing labor negotiations with the United Auto Workers union. On Wednesday, GM and the union reportedly reached a tentative deal to end the strike.

Trump entered the fray in early 2019, when he criticized the Lordstown union’s president on Twitter, saying he “ought to get his act together and produce.” The tweet, which also included an attack on General Motors for closing the plant, drew criticism from prominent Ohio lawmakers including Sen. Sherrod Brown, who said Trump was antagonizing organized labor.

Trump then tweeted in May that General Motors had reached an agreement to sell the facility to the electric truck manufacturer Workhorse, prompting GM to clarify that it was in talks but had not reached a final deal. 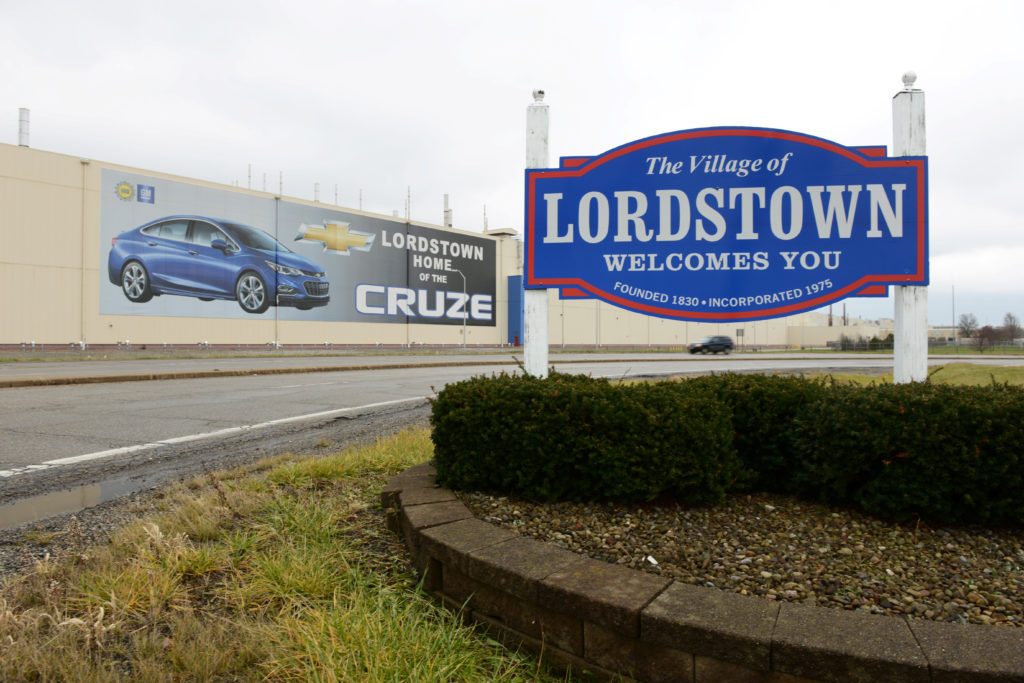 The General Motors Lordstown Complex has been closed since March, when the company stopped production at the plant. File photo by REUTERS/Alan Freed

Timothy O’Hara, who took over as president of Local 1112 after the former union president Trump attacked relocated to a GM plant in Kentucky, said the union remains in the dark about the company’s plans for the Lordstown site. He also dismissed the company’s public argument that it shuttered the plant because consumer demand for small cars has declined.

O’Hara and other union officials blamed the Trump administration for rolling back the fuel efficiency standards put in place by President Barack Obama as part of his push to reduce carbon emissions. O’Hara argued that the decision to end the Corporate Average Fuel Efficiency standards, known as CAFE, incentivized General Motors to stop making the Cruze, which is more fuel efficient than GM’s larger cars.

“That totally went against us in Lordstown,” O’Hara said. When unions face off with the Trump administration, he added, “it seems everything they do is something that favors business.”

Business leaders in Ohio said some economic indicators, like the unemployment rate, remain strong for now. Some warned however that a possible recession could hurt Trump politically in Ohio. “A recession cost George H.W. Bush reelection” in 1992, said Don DePerro, the president and CEO of the Columbus Chamber of Commerce.

We can’t go back in time to make [the economy] what it had been before.’

Presidents cannot control the economy, so it’s debatable how much responsibility they bear for both positive and negative trends, said Kathyrn Wilson, the chair of the economics department at Kent State University. Globalization, technological change and other forces will continue reshaping the U.S. economy regardless of Trump’s policies, she said.

“We can’t go back in time to make [the economy] what it had been before,” Wilson said.

Yet Trump campaigned on a promise to do exactly that, Wilson said, creating unusually high expectations that have been hard to fulfill in office. “Trump came in and said, ‘I’m going to fix these things.’ And there was a belief that he would.”

The auto sector isn’t the only part of the Ohio economy facing uncertainty under Trump. The president’s trade war with China has hit the state’s agriculture industry hard, particularly farmers struggling under costly Chinese tariffs on U.S. soybeans and other goods.

“The largest crop that Ohio grows by acres is soy beans, and that’s the commodity that’s been hit the hardest by the trade wars initiated by President Trump,” said Joe Logan, the president of the Ohio Farmers Union. 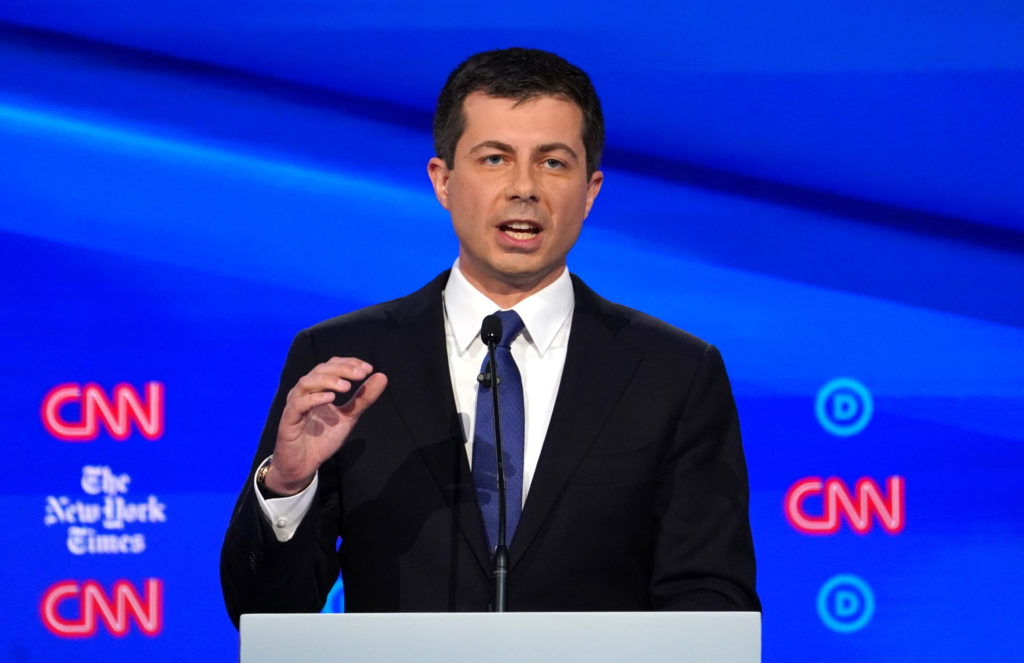 At the Democratic debate in Ohio on Tuesday, South Bend Mayor Pete Buttigieg criticized Trump’s impact on the economy in the industrial Midwest. REUTERS/Shannon Stapleton

John Lenhart, a soybean farmer who serves as the sheriff of Shelby County, said he’s felt a direct negative impact from Trump’s trade policies. “I remember three or four years ago selling soybeans for $11 or $12 a bushel. This last year I sold it for $8.35. That’s lower than the cost of production.”

In 2016, Lenhart was the Trump campaign’s chairman for Shelby County. But he said in 2020 he’s leaning towards supporting one of Trump’s Republican primary challengers.

Still, there are plenty of Republicans in Ohio who support Trump’s economic policies and say they’re not planning to abandon him anytime soon. Several credited Trump for standing up to China on trade and said they were hopeful the trade dispute would be resolved soon. This week, China announced plans to purchase more U.S. agricultural goods as both countries continue negotiating a trade deal.

Dave Hutchins, a Republican who owns a soybean, corn and cattle farm in central Ohio, voted for Trump in the last presidential election and said he would likely do so again next year. But Hutchins said he was waiting to see the results of the trade talks before passing judgment on Trump’s first term in office.

“The farm vote is in limbo. Right now a majority are still supporting him but he’s got to come through. He started this thing. He’s got to finish it,” Hutchins said.

Back in Lordstown, O’Hara said the auto union believes about 40 percent of its rank-and-file members voted for Trump in 2016, twice the typical number for a Republican presidential candidate.

After everything the union has gone through, O’Hara said he would be surprised if Trump gets the same level of support in 2020, assuming he survives the House impeachment inquiry and is on the ballot for reelection. “Some of the people who supported him in 2016 are having second thoughts,” O’Hara said.