How to Make Money on the Presidential Prediction Markets 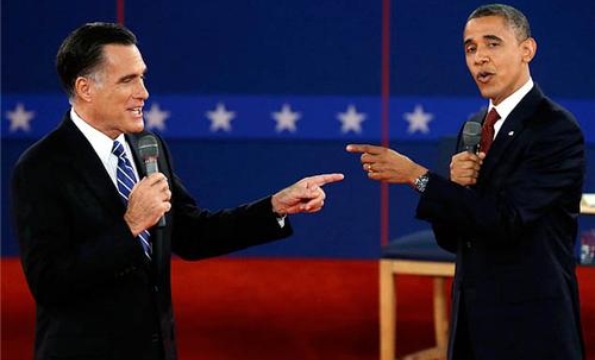 We first reported on presidential prediction markets in a favorite story of ours that aired back in 2004. Since then, more and more people have been talking about electronic markets like Intrade (based in Dublin) and IEM (based in Iowa). And recently, there was even a proposal for presidential arbitrage. Over at The Daily Beast, Alex Klein revealed a just about risk-free way to make an annual return of more than 40 percent on a simple pair of bets.

I linked to Klein’s story on Twitter just after the Mother Jones 47 percent Romney video:

In response, Doug Dachille, former head of trading at JP Morgan, emailed to warn of the dangers inherent in such an “arbitrage”t: “basis risk” — because Obama or Romney could lose the popular vote (IEM) but win the election (Intrade); “counterparty risk” — because the market in which you’ve bet could collapse and be unable to pay; “tail risk” — trades that offer a very small payoff most of the time, but result in a loss if some event occurs that has happened relatively infrequently on a historical basis. And, we should add, “legal risk” — the possibility that the U.S. government might move against you for trying to “repatriate” profits from an offshore gambling site like Intrade if it should determine the online betting to be illegal.

But then we ran into André Júdice Glória, an MIT MBA student from Portugal. As a European, he is permitted to play various online markets in Europe, including Betfair in the UK and Paddy Power in Ireland, among others. He constantly searches for the widest disparities between markets and arbitrages accordingly. And he’s been making money doing so this season.

Paul Solman: So you bet on the presidential prediction market?

André Júdice Glória: I’m an MIT student and at MIT, we don’t really bet – we arbitrage.

PS: “Arbitrage,” meaning you take advantage of price differences. If something’s more expensive in one place, cheaper in the other, you buy one — sell the other. You make the difference. You lock it in.

AJG: That’s exactly right. We pay attention to what the market is doing at any given time, and when we find that prices fall out of line in different markets we get an opportunity of locking in some riskless profit.

AJG: Well, I would if I could — Betfair is locked for U.S. persons — sell President Obama’s contracts on Betfair and buy President Obama’s contracts on Intrade, and wait, because eventually the prices on these two contracts would have to converge. They just predict the same event happening, so they will have to be worth the same once the event happens or doesn’t. So come November 6th, both of these contracts will expire at the same value, but because I sold one high and I bought the other one low, I will pocket the 8 points difference between the 2 contracts.

PS: And, in fairness, this is what traders all over the world do, in currencies, in commodities. I’ve been at trading desks where they’re always looking for these little discrepancies. You put enough money on each side of the trade and you lock in an arbitrage. That’s what you’re doing here.

PS: Because you’d be competing against players more sophisticated than yourself.

PS: [The day of the first presidential debate] Intrade odds for President Obama went down from 75 percent to 70, before the debate, and then down further to about 65 afterwards. I tweeted: “Obama walloped on Intrade at debate, dropped nearly 12 percent today, though still at 65 percent odds to win. But the night is young.” And then some guy tweeted back — dutyofyouth is his handle — “It’s clear to Intrade regulars that someone or some people are ‘Painting the tape’ tonight to make Mitt look better.” Is market manipulation possible?

AJG: It is possible. One thing I would note is that Intrade consistently has higher odds of Mitt Romney winning the presidential election than other sites, other prediction markets, and so there appears to be a pro-Romney bias on Intrade.

PS: But a pro-Romney bias might just mean that people who play Intrade think it’s more likely that he’ll win; therefore they bet more on him; therefore his odds are less unfavorable, not as long a shot, as he is on other markets.

AJG: Whether it’s manipulation, or strength of conviction from the Romney supporters — I wouldn’t know.

PS: In 2008 there was talk of market manipulation, was there not?

AJG: Yeah, so here is a letter from the CEO of Intrade, back in 2008, where Intrade apparently identified attempts to manipulate certain markets. These aren’t regulated like the stock markets, so it’s very difficult to come to definite conclusions on these things, but there certainly are a lot of allegations and the markets are small enough that you could arguably really move the needle for not that much money.

And then there’s the issue around liquidity, market structure and who’s overseeing all of this, and that’s, quite frankly, uncharted territory, even as long into the existence of these markets as we are now.

PS: So one ought to treat day-to-day, even week-to-week, and certainly hour-to-hour prices with a degree of skepticism, as one ought to in any market, right, because there are traders all over the world who are constantly trying to manipulate markets, if you will, by pretending to buy and then selling?

AJG: I think it’s safe to say there are very gray areas on whether you can trade on Intrade or anywhere else on the basis of what you know, whereas in the securities market it is very clear that you wouldn’t be able to trade on such circumstances.

AJG: Inside information is definitely one thing to wonder about. Say you were a polling company and you know that a poll that is later to come out that day favors Romney. Well, you can buy Romney on the cheap, early in the day, and sell for more once the poll is out.

PS: And as things stand, that’s not illegal.

AJG: I don’t think it’s illegal. Or, to say the least, it’s a very gray area. So these markets are prone to that behavior. They’re also prone to manipulative behavior because of the small liquidity, the thin trading that happens.

PS: Thin trading — you mean a thin market: there’s not lots of money, relative to other markets, being bet here.

AJG: That’s right. In the grand scheme of things, with the money available to the campaigns, this is peanuts. So it’s not very expensive for someone to come in in an attempt to shape events outside of the market; to promote, say, President Obama or Mitt Romney, and use then the results of Intrade and the predictions of Intrade to create a positive momentum in the real world.

PS: And these days, where lots of media outlets are finally paying attention to the prediction markets, that could be more and more valuable.

PS: Have you locked in enough money to, I don’t know, buy me lunch?

AJG: I can buy you lunch, regardless of how I do here, but I’ll have a nice Christmas break, thanks to this, yes.

PS: Really. And where are you going over Christmas break?

Here are the links to various markets, so you can see the odds for yourself right now: Intrade; Iowa Electronic Market, prices in the two boxes at the lower right; Betfair, divide the odds like 1.5 into 100 to get percentage odds; 1.5 for Obama translates in 64 percent; Paddy Power.

For a compound forecast, go to David Rothschild’s site, Predictwise.com, which averages Intrade, Iowa and Betfair in real time.